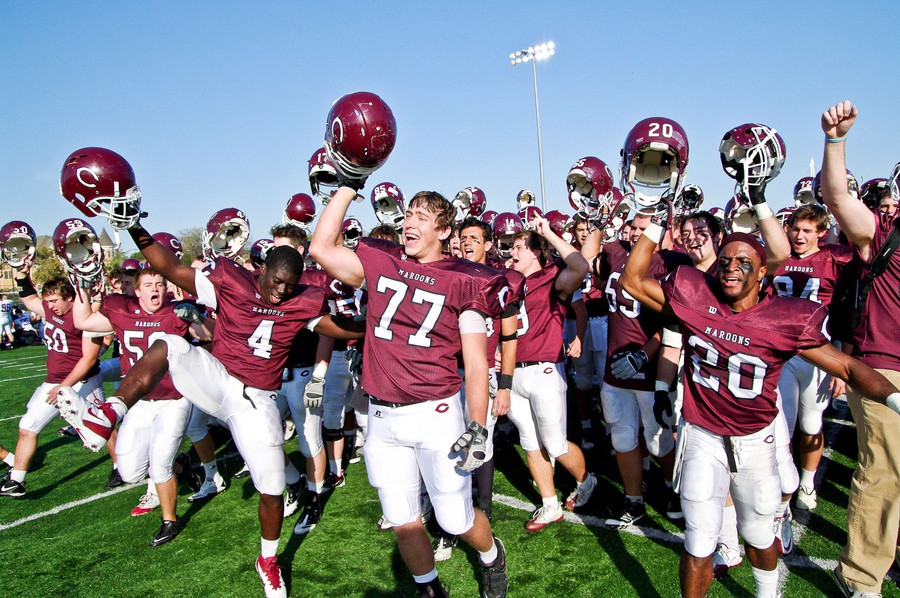 We may no longer be in the Big Ten. And perhaps we aren’t on that list of teams that is perennially challenging for the DI National Championship in some sport or another. But that doesn’t mean the Maroons lack a storied history. In fact, it’s a rich one, in both the distant and the more recent past.

Let’s take it from the beginning. The beginning of what, you may ask? How about the Big Ten Conference. Our Maroons were cofounders back in 1896, along with a list of schools whose athletics remain big to this day.

Chicago was a force in the midwest during the 40 years that Amos Alonzo Stagg coached the football squad, from 1892 to 1932. Yes, that’s the same Stagg whose name adorns the trophy awarded to the winner of the Big Ten each year in football, and our very own football field on campus. Stagg led the Maroons to six Big Ten championships, seven if you count the one in 1922 that they shared with Iowa and Michigan.

And Stagg’s victories extended beyond his time—the Statue of Liberty play that Boise State used to win the 2007 Fiesta Bowl was partially Stagg’s creation, while coaching here in 1908.

The coaching, of course, wasn’t the only exciting element to early 1900s Maroon sports. The players possessed certifiable, DI-level talent, too—which helped Stagg and other coaches look good. One crucial chess piece of his was Jay Berwanger.

Berwanger was the first recipient of the Heisman Trophy—still awarded each year to the best player in college football. The halfback was given the honor in 1935, when it was called the Downtown Athletic Club Trophy. The next year, they renamed it the Heisman, and that name stuck. For those who doubt that the Maroons could ever reign supreme on the gridiron, Berwanger’s Heisman trophy sits in the middle of the Ratner Athletic Center rotunda.

Long before Title IX, lady Maroons were putting on a show as well. Between 1898 and 1935, Gertrude Dudley served as director of “physical culture” for women, organized multiple female teams, and crusaded for more women’s sports at the University.

Then, sports seemingly faded into the background. The South Siders left the Big Ten in 1946, after University President Robert Manyard Hutchins decided to eliminate the school’s varsity football team in 1939. This space is for highlights, though, so please forgive the skipping over of that dark period.

We rejoin the South Siders’ highlight reel in 1987, when the Maroons again helped to charter a sports conference. This time, it was the NCAA DIII University Athletic Association, or the UAA.

In 2012, the excitement over the women’s basketball team was palpable on campus, as they went undefeated en route to an impressive showing in the NCAA tournament, where they fell to Calvin College in the Sweet Sixteen.

Other bright spots in recent history include the women’s tennis team, which in 2012 made it all the way to the national title match, before losing to Williams College. The appearance in the finals was the Maroons’ first in women’s tennis, and the national runner-up trophy was quite a feat.

This year’s baseball team will get the chance to push the win-streak over DI Northwestern to three years running.

There have been individual performances of note as well, like that of distance runner Julia Sizek (A.B. ’13). Last year, Sizek put together another decorated résumé, getting tapped as an All-American in cross country, as well as both indoor and outdoor track and field. Sizek is also a finalist for the NCAA Woman of the Year Award, an honor that no Maroon has ever won. The winner will be announced on October 20.

Athletics reinvention continues to this day, on both the varsity and the club levels.

The varsity Maroons in women’s basketball, football, men’s soccer, and both men’s and women’s tennis all have named new coaches within the last two years.

On the club level, it seems like the teams are as strong as ever. The women’s lacrosse club, for example, made its first playoff appearance since 2006.

Stagg might never have dreamed that his storied coaching record would one day be mentioned on the same page as a women’s club lacrosse team. That’s the thing about the Maroons: Their history is unique and you never quite know what’s coming down the road—but you know that the Maroon Nation is alive and well.