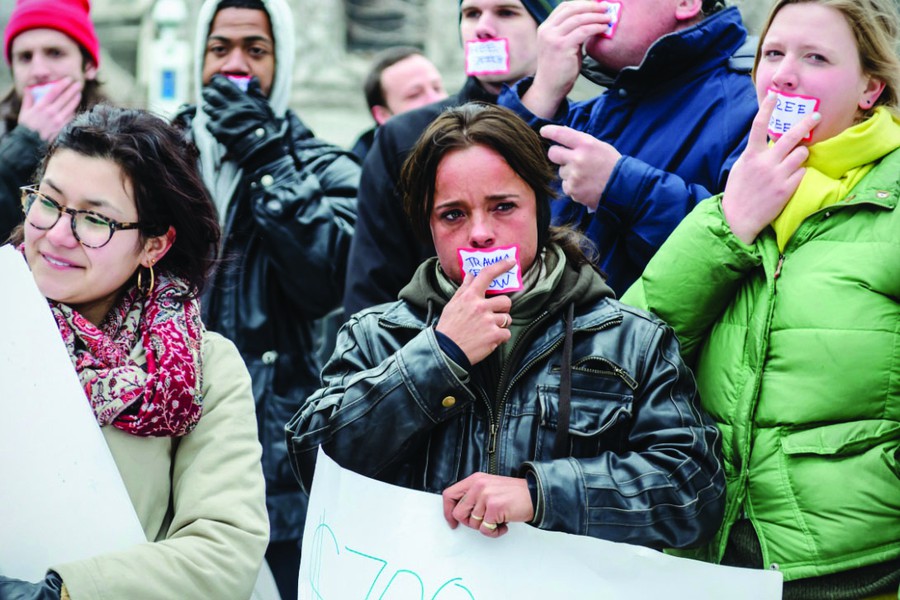 UCPD officer Janelle Marcellis holds a protest sign and wears protest tape over her mouth at a trauma center protest in 2013. She infiltrated the protest to gather intelligence.

Every campus has its problems, and this article is a crash course in ours. These controversies from the past year are more than likely going to linger on campus this year, so here’s how they started.

The first event to spark ire in student activists last year began with four arrests during protests in February in support of bringing a Level 1 adult trauma center to the South Side, which would treat penetrative wounds like gunshots around the clock at the new Center for Care and Discovery. Members of the RSO Students for Health Equity (SHE) co-staged a demonstration on January 27, which ended in the University of Chicago Police Department (UCPD) arresting graduate student Toussaint Losier, Alex Goldenberg (A.B. ’06), a cameraman with the Anti-Eviction Campaign, and a high school student. All four were charged with trespassing on University of Chicago Medical Center property, although the charges against the high school student were later dropped. Losier was also charged with resisting arrest, which was ultimately dropped at his late February hearing.

Throughout February, SHE and community organization Fearless Leading by the Youth (FLY) held a number of demonstrations, and during one, discovered a UCPD detective working undercover. The detective marched with protesters holding a sign and placed a sticker over her mouth in solidarity with demonstrators outside President Robert Zimmer’s house. A photographer captured images of the detective’s phone while she was texting a superior officer during the march, who was mentioned by both his name and title.

This incident prompted a campus-wide e-mail from Provost Thomas Rosenbaum and Zimmer, who condemned the actions of the detective and promised an external investigation into the actions of UCPD officers during both this protest and an earlier one on January 27. The superior officer who ordered the detective to work undercover was summarily fired. The external review, released May 20, found no wrongdoing on the part of other officers or UChicago officials under current University policies.

Many student activist groups had perceived Losier’s arrest as evidence of racial profiling by campus police, a situation that echoed tensions from 2010 when a black student was arrested in Regenstein Library for criminal trespassing and resisting arrest after refusing to show his UCID. During spring quarter, the issue of diversity on campus was exacerbated when a Facebook page popped up entitled “Politically Incorrect UChicago Confessions,” with submission guidelines that read, “racism, homophobia, prejudice, offensiveness, etc. in all forms is welcome.” This prompted a torrent of responses that led to an Office of Multicultural Student Affairs (OMSA) forum in which students expressed frustration that administrators were ineffective in dealing with similar problems. Many of the original controversial comments were removed, but the page remains active, rebranded as “Politically Incorrect Maroon Confessions.” In response to accumulating diversity concerns, administrators launched RISE (Reflect. Intervene. Speak. Engage.), with programming that will continue into this year.

During Student Government (SG) elections last spring, two slates were accused of campaigning before the election began, and one of the slates was accused of sabotaging another. The accusations were brought before the SG Election and Rules Committee (E&R), which by the end of the campaign had issued three major and two minor vote penalties to one slate, and none to the other.

A Community and Government Liaison candidate was accused of illegally recording and distributing a conversation with a member of E&R, and was disqualified, giving the position to a write-in candidate. During the elections, E&R itself came under heat, as students within and outside SG complained that the committee deliberations were not publicly available, as required under SG bylaws. The complaints resulted in the publication of E&R’s complaints database and meeting minutes, and will mold reforms this fall.

On May 29 the delivery of 79 boxes to the Phi Delta Theta fraternity house to a recipient named “Reggin Toggaf” by a black mail carrier created outrage on campus. Read backwards, the name is a racial and homosexual epithet. The mail carrier reported the story to the Chicago Sun-Times, blaming the fraternity and accusing them of playing a racist prank on him. According to fourth-year Phi Delt brother Piotr Wilk, no members of the fraternity had been contacted by the Sun-Times to corroborate the story. The brothers—who received a bomb threat after the Sun-Times story was published—say they were the victims of an anonymous prank, a claim supported by the national organization’s initial investigation, and apologized to the mail carrier.

Over the summer, as part of renovations to the Reynolds Club and an overhaul of the organization of RSO advisers, administrators planned to downsize the student-run cafe Hallowed Grounds in favor of cubicles for RSO advising. As of August 3 when the Maroon broke the story, administrators were planning to get rid of the refrigerators and majority of the seating area. After vocal objections from the student body, including a private letter from Student Government and a 1200-signature petition, the University decided to halt the reconfiguration until they gather more student input this fall.