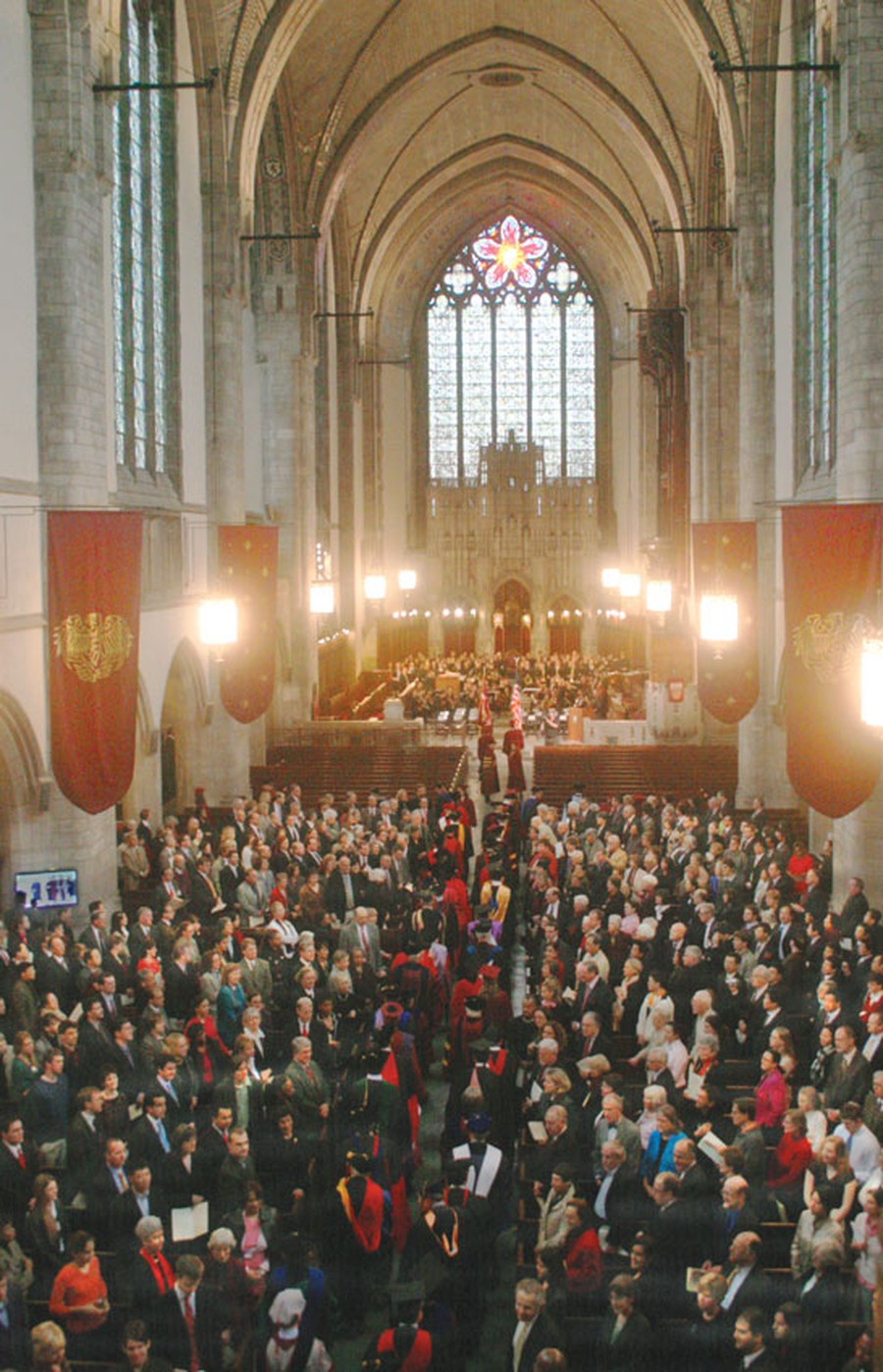 Invited to begin your spiritual trek. Invited to continue it, to reject it, or to transform it. Invited to forget it, to end it. Or to start afresh.

Invited, above all, to decide for yourself.

Religious life on campus runs from A-Z, agnosticism to Zoroastrianism. In between, you can find spiritual communities for Bahá’ís, Buddhists, Christians, Hindus, humanists, Jews and Jains, Muslims, pagans, secularists and Sikhs, Quakers, and Unitarian Universalists. You can find interfaith dialogue groups. You can find the place that’s right for you, you can explore different groups, or, of course, you can do nothing at all.

Rockefeller Chapel is the “hub” of religion on campus. Located at 5850 South Woodlawn Avenue, the building is the home of the Interreligious Center and is also a major performing arts venue. Those involved with Hindu Student Sangam, for example, meet for prayers and discussion in Rockefeller’s Hindu prayer room each Sunday. Hindu and Muslim students say daily prayers in the same chapel where Christians take Communion and Buddhists meditate.

For those who want to meet weekly and discuss Bible passages, perform community service, and just generally hang out, the InterVarsity Christian Fellowship is there for you as one of the largest Christian groups on campus. Calvert House is the center of Catholic life at UChicago, and offers daily mass, organizes service trips, and runs a tutoring program. Unitarian Universalists can join the First Unitarian Young Adult and Campus Ministry at 5650 South Woodlawn Avenue on the first and third Sunday of each month.

There is the Hillel Jewish Center, Chabad Jewish Center, and jUChicago, which collectively function as the University’s Jewish resource centers but are generally open to anyone interested. They provide students with holiday services, community service opportunities, trips to Israel, and links to courses and programs at the University’s Chicago Center for Jewish Studies.

There’s also the Secular Student Alliance for those who identify themselves as atheist, agnostic, humanist, secular, non-religious, questioning, or any other name you can think of not tied to an organized religion. The four-year-old organization has hosted talks by The End of Faith author Sam Harris, outreach events like Superstition Bash, and debates with campus organizations like the InterVarsity Christian Fellowship.

The perhaps less-known religions and denominations are also represented. There are spiritual and religious organizations for those interested in the Bahá’í faith—which emphasizes the unity of God, religion, and all mankind—as well as Jainism, a faith rooted in India that believes in non-violence toward all living creatures. There are groups that explore paganism, Wicca, Quakerism, and Sikhism, a monotheistic religion that stresses the individual’s internal religious state and doing good actions. Zoroastrianism, one of the world’s smallest religions based on the teachings of the ancient Persian prophet Zoroaster, is also present on campus.

The University boasts several interfaith groups as well. The Spiritual Life Council, comprising undergraduate and graduate students nominated from a myriad of faiths, organizes events like the annual Spirit Week and Multifaith Celebration. The Guild of Student Carillonneurs “is dedicated to promoting the playing of the carillon (the bells in Rockefeller’s tower) on campus.” Interfaith Community Service connects students of every faith to perform and reflect on service projects together. Interfaith Dialogue is pretty much what sounds like: a chance to discuss with those of other faiths.

UChicago is also home to a heterogeneous group of academic spiritual centers. The Divinity School, located in Swift Hall, is the University’s graduate school for the study of religion. The school offers more than 100 courses each year across 11 areas of study, including Anthropology and Sociology of Religion, History of Christianity, History of Judaism, History of Religions, Islamic Studies, Philosophy of Religions, and Religion and Literature. Affiliated institutions include the Joseph Bond Chapel, the Baptist Theological Union, Disciples Divinity House, and the Hyde Park Cluster of Theological Schools.

If nothing mentioned here suits you, remember it is not a comprehensive list, and more information can always be found at spirit.uchicago.edu. There are opportunities for everyone, the faithful and secular, the atheists, monotheists, and polytheists.