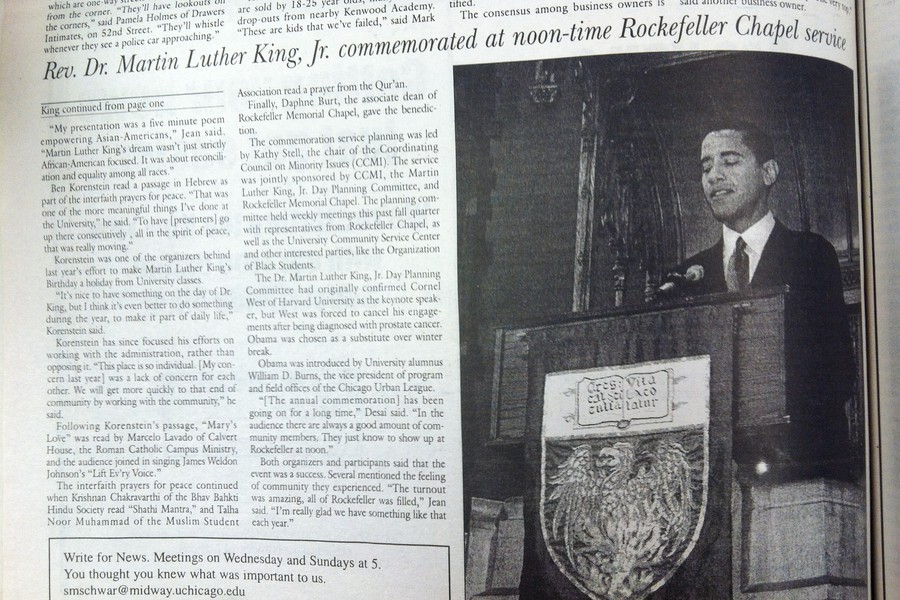 In 2002, then–Illinois State Senator Barack Obama gave the keynote address during the University’s Martin Luther King, Jr. celebration. Obama, then also a senior lecturer at the Law School, was actually chosen as a fill-in for Cornel West, who was unable to give the talk after being diagnosed with prostate cancer. In the excerpts from the speech, as reported by Maroon news editor Jennifer Bussell (A.B. ’04), one can see some of the themes on which Obama would draw during his run for the White House.

“The greatest challenge for any King day speaker is to convince people that the message is still true, that the dream still continues to be deferred,” said Obama, a senior lecturer at the University of Chicago Law School, in his keynote address.

Obama talked about the changes brought by September 11, especially what he perceived as a different measure of greatness: community strength and equality.

The rest of Obama’s address was devoted to elaborating on the principles of empathy, responsibility for actions, and hope. According to Obama, empathy will lead to a genuine effort towards equality, and citizens will take responsibility for their actions in order to effect real change. Obama identified as Dr. King’s most lasting legacy the final principle of hope.