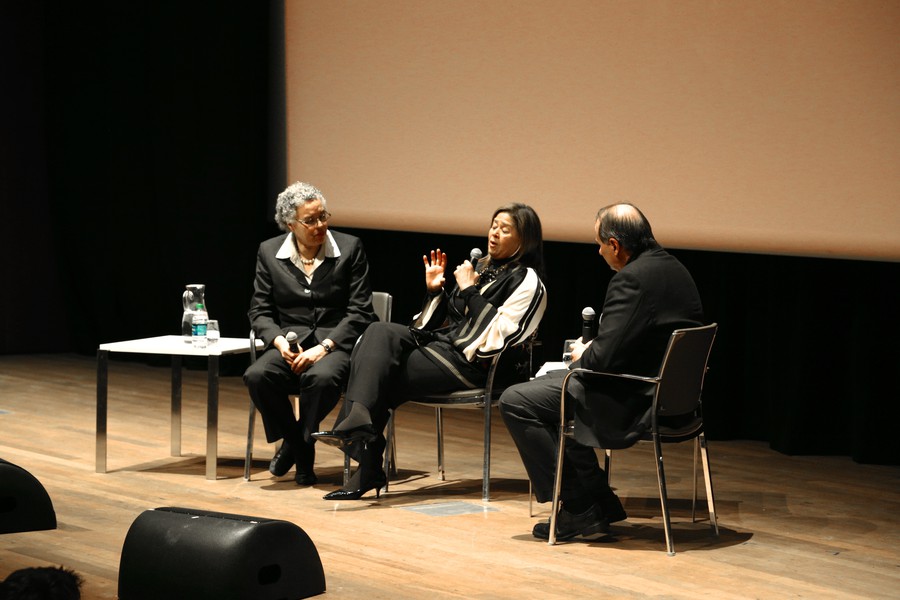 Is there tension in labeling a play as being “about grace” and performing it before 800 people as part of a symbolic, first-ever collaboration between UChicago’s new Logan Center and the Harris Theater, the cavernously large stadium-style theater adjacent to Millenium Park? This very event took place Tuesday evening as celebrated documentary theater–maker Anna Deavere Smith concluded her three-week residency at the Logan Center with a performance of her new show, a work in progress entitled Conversations on Grace, leaving town immediately after the performance.

The director of Logan, Bill Michel (A.B. '92, M.B.A. '08), and the president of Harris, Michael Tiknis, spoke before the performance began, calling the collaboration a “joyous, wonderful” occasion. In an interview with the Maroon, Smith credited Michel with the genesis of the residency, saying she had been encouraged by people at the Harris School of Public Policy to contact him after performing at the Harris Theater with Theaster Gates.

“It had less to do with the city, although I do like coming to Chicago,” Smith said. “In the times that I’ve given speeches here, I would say that Chicago, Minneapolis, Seattle, and Portland—and I travel a lot all over the country, and present and talk—and I would say those are the audiences that listen the deepest.”

The answer to the question, and the problem at stake not only in Smith’s residency here but also with Conversations on Grace as a play, is that there is little tension, since it feels engineered to be performed before a big, any-city-in-America audience. The subjects Smith interviewed for On Grace are, fittingly, mostly elite. They are spiritual and intellectual leaders—a rabbi, an imam, the head of the Memorial Church at Harvard, another Harvardite who is a professor and author, a philosopher. Those subjects who are not, such as Paulette Jenkins, a female prison inmate whose story Smith has performed in other plays, resonate most deeply and are respectful of silences. They are the most humble and real and graceful of all Smith’s characters. And yet they feel most out of sync with this particular show’s more nebulous purpose.

Smith’s past work has included the docu-plays Fires in the Mirror and Twilight: Los Angeles. These projects explored racial conflicts in Crown Heights and Los Angeles, respectively. Let Me Down Easy, her most recent work, centered around health care, the vulnerability of the human body, and, to some extent, the word “grace” (although in that case, “grace” was only grace as it referred to the direct experiences of the hospital patients Smith spoke with). These three plays focused on local social and political issues in order to speak about abstract moral questions, as opposed to focusing on abstract moral questions, period.

Cellist Joshua Roman performed alongside Smith. The two have been in several residencies, including this most recent one, in various parts of the country over the past two years. Roman’s lovely cello catches your attention sidelong, when you are considering what has just been said during the intervals between Smith’s portrayals of her various characters.

The complicated relationship between the famed social conscience of Smith’s work and the source of the money that allows her to create it—the “famed” part—comes through in glimpses in Conversations on Grace. When boxing champion Michael Boytt speaks about what held his troubled father back in life, for example, he says, “What was in his way? The white man.” Transformed into English professor Elaine Scarry, Smith says, “In this country, we don’t like to talk about symmetry, because we are so asymmetric…Everybody would have to say, ‘Gee, we have a big problem.’”

“Maybe, in the case of Minneapolis and Chicago, it’s so cold in the winter that you want to be in a live environment inside; you can’t be outside,” Smith said. “But maybe it’s about the nature of the educated citizenry…. Sometimes it’s just like, what is the culture of a town, in terms of how they expect people to be.”

Smith’s next project is slated to be about education, she revealed. “It’s about the kids who don’t make it through school…the kids who just don’t make it.” She has already begun conducting interviews, but has not latched onto a specific narrative.