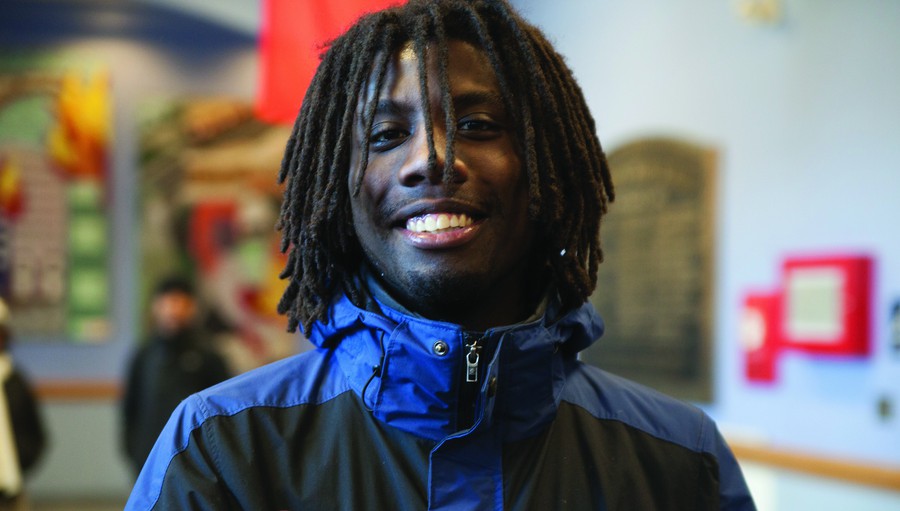 On Tuesday afternoon, Hyde Park Academy High School senior Dejohn McCray-Perry laughs with his friends after finishing his semester exams for the day. He has applied to colleges such as the Dawson Technical Institute of Kennedy-King College in Chicago and Southern Illinois University at Carbondale, but he didn’t consider the University of Chicago.

If he had known that he didn’t have to pay the application fee and would be given grants instead of loans if he were accepted, would McCray-Perry have applied?

“Yeah!” he said with a surprised look.

With 905 students, an ACT average of 14.9, and a graduation rate of 53 percent, Hyde Park Academy, a public school in Woodlawn, is on probation as determined by Chicago Public Schools (CPS) as of the 2012–2013 school year. Only 65.1 percent of graduates go on to attend college, and 94.7 percent of the school’s students are considered low-income.

Because he resides and goes to high school in the city of Chicago, McCray-Perry is eligible for UChicago Promise, a program announced in October 2012 that offers college preparation by UChicago faculty and students, an application fee waiver, and coaching by admissions counselors for financial aid applications, interviews, and application essays. The most coveted aspect is a pledge of graduating debt-free through University grants—and no loans—in a student’s financial aid package.

A year after the launch of the program, the first cohort of UChicago Promise students is now enrolled at the University. There were 116 students accepted to the class of 2017 who were part of the first year of UChicago Promise, and 73 of them are currently enrolled, according to a University report. The admissions office also saw almost a 50 percent increase in applications from Chicago students, 82 percent of whom were from the CPS system.

The University also has a $2.2 million commitment to replace loans with grants as part of UChicago Promise, and the program includes 31 full-tuition scholarships for select students from CPS.

First-year Rita Jefferson is one of those 31 students. The daughter of a librarian and a school bus driver, the main reason she considered and enrolled at UChicago was the pledge of grants instead of loans.

“I didn’t initially want to come. I was forced to apply because I didn’t think I would get in, but I ended up choosing it because I got the CPS scholarship,” she said. “It was almost exclusively [because of the] money.”

“There are two different pieces to the puzzle in the admissions portion. One very directly services kids who want to be here, and that’s the application fee waiver and no-loan offer. That’s a very different set of students than the broader programming set,” said Veronica Hauad, UChicago’s admissions counselor for the city of Chicago. “Our real focus was the larger program. We knew students were under-matching [with colleges], and we wanted to help.”

That broader programming set includes the Admissions Academy, an initiative that provides professional development for educators and guidance through college admissions and the financial aid process of any selective four-year college for students and their families; the Collegiate Scholars program, a three-year program for preparing students for higher education beginning after ninth grade; the College Bridge program, which allows students to take an undergraduate University course at no cost; and Upward Bound, a program for underclassmen in high school that offers potential first-generation college students the opportunity to experience college and prepare for admission to post-secondary schools.

Some of these programs fall under the umbrella of the Office of Special Programs-College Prep (OSP-CP), which Dovetta McKee directs. The OSP-CP serves certain CPS high schools in the Greater Grand Crossing, Douglas, Washington Park, and Woodlawn neighborhoods, all on the South Side—including Hyde Park Academy.

“When young people looked at the cost of coming to the University, they automatically thought [they] could not afford it,” McKee said. “With UChicago Promise, that changes that dynamic….It gives young people the chance to talk to admission counselors [through workshops] and understand that they have the opportunity to gain admission.”