The top five performances of Sunday's Grammys included a stripped-down rendition, a proud power couple, and an unexpected commercial break. 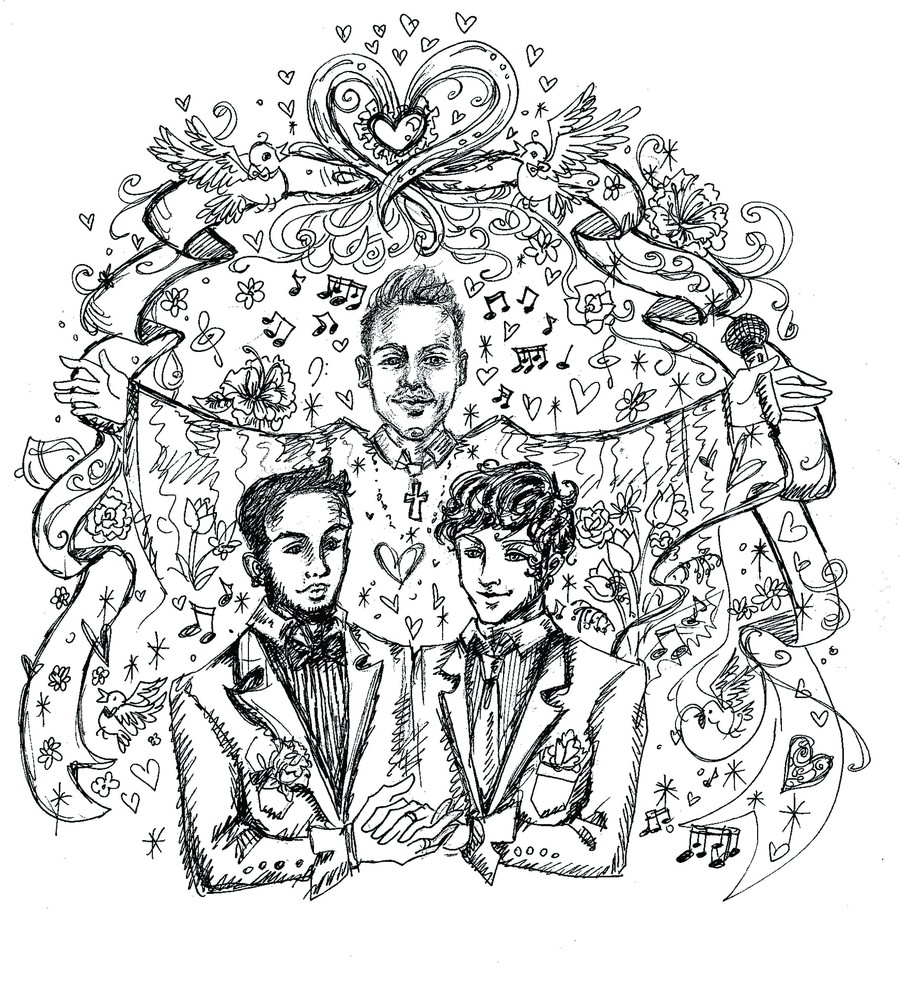 At the Grammys on Sunday, Macklemore and Ryan Lewis (“Same Love”) stood by as Queen Latifah married 33 same-sex couples.

This year’s Grammys were less about the awards and more about the performances and theatrics—82 awards were given out, but only a fraction of those actually made it to the broadcast.  Here are our top five best performances on music’s biggest night.

5. Lorde—The anti-excess pop princess won song of the year and best pop solo performance for her track “Royals” last night and gave a haunting rendition of her stripped-down song. Images of ghostly angel statues appeared onscreen behind the 17-year-old singer, who was dressed in black and white with her fingertips covered in black ink. Compared to most of the other Grammy performers, her production was minimalist, but Lorde managed to accomplish a lot by using so little in this spooky version of her hit single.

4. Kendrick Lamar and Imagine Dragons—This unlikely pairing seems laughable, but Kendrick Lamar and Imagine Dragons ended up delivering one of the most stunning shows of the night. Lamar interspersed verses from his song “m.A.A.d. city” with the rock group’s “Radioactive” for a percussion-heavy performance. Clad in all white and thrashing in unison, the musicians looked like they really were leading a revolution into “the new age” when Lamar and singer Dan Reynolds were finally covered in red paint by cannon fire. Leave it up to the ingenious Kendrick Lamar to breathe new life into a song you were getting sick of hearing on the radio so often.

3. Daft Punk, Pharrell, Nile Rodgers, and Stevie Wonder—Daft Punk’s infectious track “Get Lucky” dominated the music charts last year and fittingly won Grammys for record of the year and best pop duo/group performance. The irresistible track got the star-studded audience on their feet while also working in past songs by Daft Punk, Stevie Wonder, and Chic’s “Le Freak.” The French duo’s performance with Pharrell also raised many questions for fashion critics. Where did Pharrell get that gigantic brown hat? Are Canadian Mounties in this season? Is it a throwback to Smokey the Bear? Or is he the new spokesperson for Arby’s? The world may never know.

2. Beyoncé & Jay Z—America’s favorite power couple opened the show with “Drunk In Love,” the second single from Beyoncé’s self-titled album that made a surprise release in December. Bey turned up the heat with a chair dance shrouded in smoke and her flawless, sultry vocals. When Jay finally came out on stage to join her while rapping his verse, the couple walked downstage hand in hand, reminding us that they are the coolest parents the world will probably ever see.

1. Queens of the Stone Age, Nine Inch Nails, Dave Grohl, and Lindsey Buckingham—The evening closed with an incredible performance by some of the best names in rock music, past and present. Nine Inch Nails played “Copy of A” as the band’s eerie shadows loomed behind them, which fit quite nicely with singer Trent Reznor’s sinister crooning. The dark shadows soon transitioned into blinding lights with Queens of the Stone Age’s powerful song “My God Is The Sun.” Foo Fighter’s Dave Grohl and Fleetwood Mac’s Lindsey Buckingham also joined the two bands onstage. Unfortunately, the performance was cut short by advertisements because the show was running overtime. The early cut-off prompted Reznor to later tweet at the Grammys: “Music’s biggest night…to be disrespected. A heartfelt FUCK YOU guys.” It’s a shame this unbelievable performance didn’t get the full airtime it deserved.