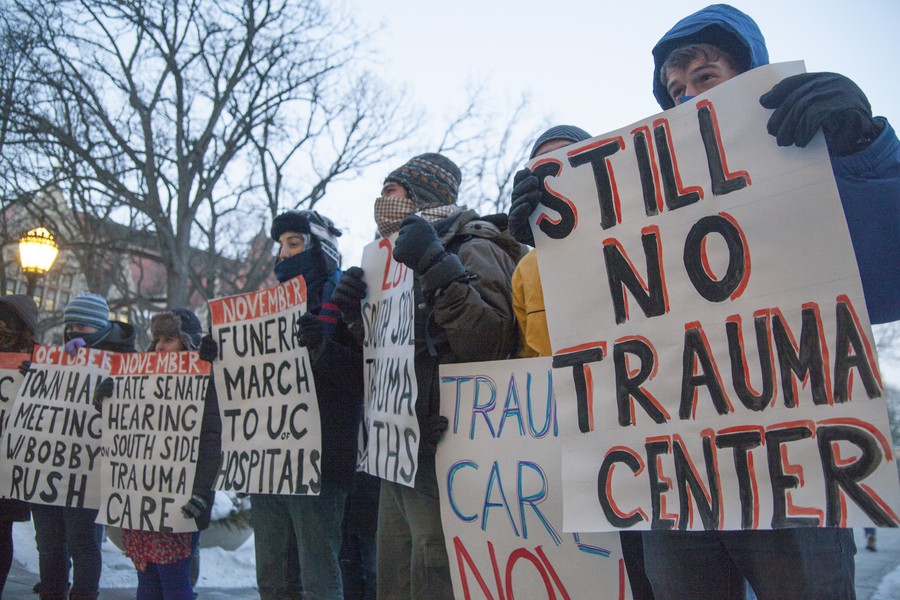 Marking the one-year anniversary of the sit-in at the Center for Care and Discovery (CCD) where four people were arrested by the University of Chicago Police Department (UCPD), members of Students for Health Equity (SHE), along with other community organizations in the Trauma Center Coalition, held a vigil in front of Levi Hall to protest the lack of a level-one adult trauma center at the University of Chicago Medical Center (UCMC).

Approximately 40 people, most affiliated with SHE, stood for about 20 minutes in below-zero temperatures, holding signs that gave a timeline of SHE’s progress over the last three years. The event was meant to be a candlelight vigil, but the candles would not stay lit due to high wind.

The treatment of the students arrested last year, particularly ninth-year history Ph.D. student Toussaint Losier, drew criticism and sparked dialogue within the University community about the UCPD and the trauma center.

The Trauma Center Coalition includes SHE, Fearless Leading by the Youth (FLY), Southside Together Organizing for Power (STOP), Reclaiming Inner-City Streets and Elevating Chicago (RISE Chicago), and other groups. Since the CCD protest a year ago, they have held two protests, held a flower vigil in front of President Robert Zimmer’s office, and met publicly with Executive Vice President for Medical Affairs Kenneth Polonsky.

“Some things take a long time. It took two and a half years for the hospital to talk to us. It took 15 minutes for Toussaint to be hauled off the concrete where he’d been left when we watched him. It took [a] comparatively long time for us to be kicked out of the administration building this time around. And it’s taken years, over 20 of them, for U of C to face up to the question of the trauma center,” said eighth-year anthropology Ph.D. student Duff Morton.

Speakers from several groups affiliated with the Trauma Center Coalition spoke to the group, including members of SHE, the Coalition for Equitable Policing, Graduate Students United, and FLY.

Several UCPD officers were stationed inside Levi Hall, and Assistant Director of Student Emergency Systems Lynda Daher shooed the group out of the building and constantly urged them to move to allow pedestrians through the quad. Daher told the group that they needed a permit to protest on the main quadrangle, but Dexter said he believed the policy was that a permit was unnecessary after 5 p.m.

The University’s Protests & Demonstrations Policy says that “a request to hold a…demonstration should be submitted no later than 48 hours before the start of the event and must be approved by ORCSA and/or [a group’s] appropriate RSO Advisor.”