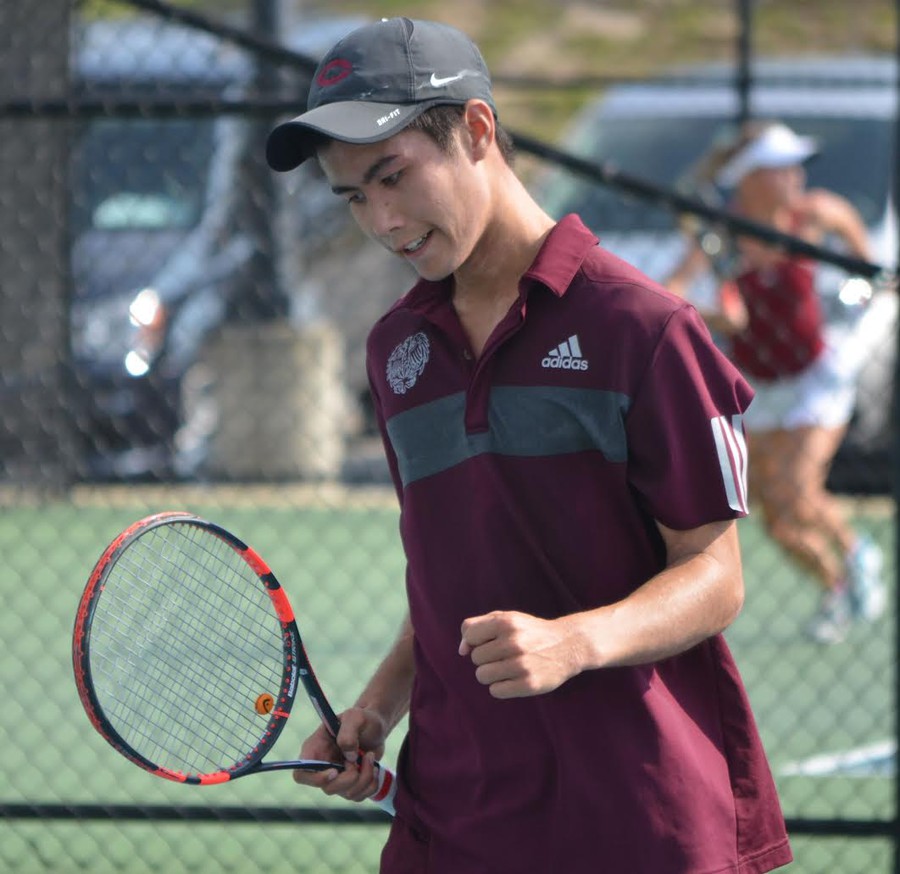 “I didn’t really know what to expect coming into the tournament,” first-year Nicolas Chua said. “I knew I prepared well, but we all knew there were tough matches ahead.”

Indeed, this tournament was an unfamiliar sight for the Maroons. However, upon the arrival of head coach Jay Tee a few years ago, the Maroons have started to make their mark on the tennis landscape, and they saw this weekend as the opportunity to do just that.

On the doubles side of things, the Maroons were able to advance to the ITA Nationals on the backs of fourth-year Deepak Sabada and first-year David Liu. The duo’s well-developed chemistry faced its toughest test yet in their opening match of the tournament, a heated contest against the doubles pair of second-year Christopher Ellis and fourth-year Pierre Planche from Bates College.

In the first set, Liu and Sabada dug themselves into an early hole by falling behind 5–3. However, the two were able to fight back and take the first set via a 7–6 tiebreak. In the second set, the two once again fell behind 5–3, but were able to fight back as they strung together four games to ultimately take the match with a score of 7–6 (5), 7–5, moving onto the semifinals against Trinity University.

Against Trinity, the Chicago pair got off to a hot start with an early 4–1 lead. However, this time around the Maroons were on the other side of a rally as their opponents from Texas were able to win the next five games to take the first set 6–4 and ultimately sealed the win with a second set win at 6–1. While Sabada and Liu had their road to the national final stymied, they still remained motivated. However, they fell short in the third place match as they lost to the doubles pair of third-years Matthew Heinrich and Ben Foran from the Stevens Institute by a score of 6–4, 6–4; thus settling for fourth place.

In the singles competition, Chua charged right out of the gate with a victory over the No. 1-seeded  fourth-year Alex Ruderman of Emory University by a score of 7–6, 7–5. In the semifinals, Chua faced his greatest threat to national triumph, fellow first-year Steven Chen from Wesleyan University. Chua was able to snag the first set with a score of  7–5, but dropped the second 3–6 to set up a winner-take-all third set. With a fortitude exceeding his age, Chua was able to take down Chen in the third set with a score of 6–3 and advance to the national championship final on Saturday. Reflecting on the match, Chua couldn’t help  recognizing the intensity of it.

“I think my toughest match was against Steven Chen in the semis. It was the closest match score-wise,” said Chua, “I think the toughest two games of the tournament were the last two in the third set against Steven.”

In the championship match on Saturday, Chua was able to get off to a lightning-fast start against No. 3-seeded Heinrich of the Stevens Institute taking a 4–0 lead in the opening set, a lead that prevailed as he ended up winning the set by a score of 6–1. In the second set, Chua let Heinrich make things interesting, but was able to break Heinrich’s serve in the second set in route to a 6–4 win and a national championship.

“It feels great to win matches, and even better to win in bigger tournaments,” said Chua, “I’m happy to bring home the title, and hopefully I’ll be able to continue in the winter and spring.”

With a successful fall preseason wrapped up, the Maroons now enter the conditioning and training stage of their season. Chicago begins their regular season on January 24 with a match against DePaul University.