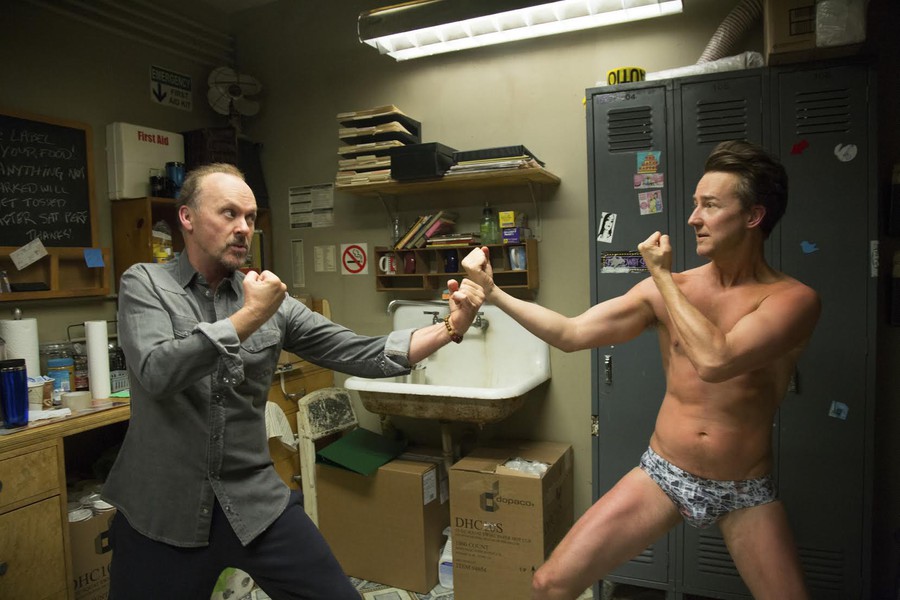 With his fifth feature film, Birdman, Alejandro González Iñárritu has proven himself to be an extraordinarily capable director. Michael Keaton (Riggan Thomson/Birdman) performs admirably in his self-referential titular role, while supporting players Edward Norton (Mike Shiner) and Emma Stone (Sam Thomson) also display exceptional skill. Yet despite its stacked arsenal of acting talent, when viewers arise from their seats, what they are guaranteed to be marveling at is the film’s stellar cinematography and soundtrack.

As one would expect from a superhero title, the movie does not cease to visually amaze. However, it does so in all of the most unexpected ways. Whereas the average shot length in most Marvel movies is around four seconds, Birdman is phenomenally shot and edited by cinematographer Emmanuel Lubezki (of Gravity fame) so that it appears to be a single take. While the modern-day superhero movie wows its audience with CGI visuals, Birdman impresses viewers with its persistent camera movement. Each of these wild and winding shots deconstructs the set. To make sure that the shot length difference is noticed, in a short sequence, Iñárritu relentlessly pummels the audience with CGI explosions while the voice of Birdman proclaims that this is what the people want.

This, of course, is not the only manner in which the Mexican director eschews run-of-the-mill superhero movies. Instead of the dramatic soundscapes full of bombastic noises and heavy bass, Iñárritu employs Antonio Sanchez to score the film with a variety of distinct and unconventional jazz drum solos. The soundtrack truly is a beautiful accompaniment. The music seems so real and inherent to the set that when the camera pans to show Sanchez sitting behind a drum set near the film’s conclusion, his presence barely induces a double take.

That these technical aspects overshadow the rest of the film is nothing but the highest of praise for Lubezki and Sanchez, because the acting performances in Birdman were also top-notch. In a very nuanced role, Keaton is able to portray the adequate amount of insanity while still remaining definitively human. This attribute is something of a commonality among the characters, whose internal inadequacies manifest themselves in such different ways.

Norton steals the first act of the show as a self-consumed Broadway star. Shiner’s intricate knowledge of Broadway not only helps characterize him as a self-absorbed, know-it-all veteran, but also helps to shed some light on the differences between theater and cinema. His exuberance and wit make the on-stage rehearsals come to life, and the sparks keep flying as he meets Sam. The emotional dynamic created by Norton and Stone is perfect. As equally self-aware individuals, Mike and Sam are able to lower their visages and speak with each other in a very real way. Each rooftop scene is filled with unparalleled passion and personality, and this excitement permeates the rest of the film.

Armed with a phenomenally talented cast, a cinematographer whose talent supersedes even his great reputation, and a jazz musician capable of creating the liveliest atmospheres, Alejandro González Iñárritu presents a movie that will surely contend for the title of best of the year.