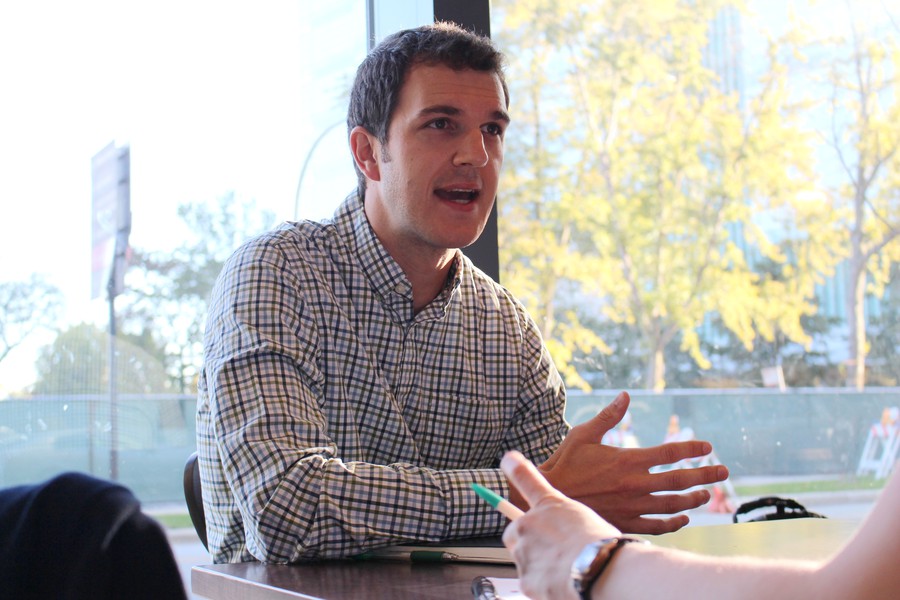 David Omenn rose through the Teach for America (TFA) ranks from teacher to vice president of recruitment. Omenn joined TFA after graduating college, teaching science to every grade at an elementary school in Houston. Omenn sat down with The Maroon to discuss his experience in TFA, recruiting at UChicago, and the future of the organization.

Chicago Maroon: What were some of the best and worst parts of your TFA experience?

I think the best part unquestionably is the students. I had the privilege of working with all 600 in my school, which created a lot of challenges, just in terms of lesson planning, in terms of building relationships. But seeing the potential to shape the way that my entire school thought about science education was really important. And just to see the figurative light bulb going off in kids’ heads on a daily basis was really phenomenal, so I’d say that undoubtedly is the best part. I think the most challenging part is getting really good at your craft. It takes a lot of work to become a really good teacher, and it takes a dedication to your students, it takes building relationships with veteran teachers in your school, and just relying on a lot of resources around you. But it takes a lot to get there.

CM: I’ve read studies that TFA teachers tend to help their students make the most noticeable strides in math and science. I was wondering, as a previous science teacher, where you think that difference comes from?

DO: I think it’s to some degree, you have to look at some of the causes of the issues that TFA teachers aim to address in the first place. We live in a society where very few really promising young people are encouraged to become teachers, particularly in math and science where you’re much more likely to go to medical school or into academia or into an industry job. Students are generally more likely to have a math or science teacher that does not have content area knowledge, and a lot of TFA teachers do come in with content area knowledge. And my own [experience in teaching] elementary school is relatively mediocre, but again, I came in with more of a content area background than anyone from my school had ever had. So I think that’s part of it. I also think generally, as I said before, just a real dedication to honing your teaching craft to ensure you’re doing as best as you can for your students, and I think that’s true for every Corps member classroom.

DO: I was very much on the policy-law track; I suppose you could say, in college. I had worked in D.C. one summer, but came back my senior year thinking, “Do I want to go back to a job that would be fairly low-level, interesting, I would learn a lot, but probably would not make much of a difference?”.... My belief that education is really at the cornerstone of opportunity in life, and the inherent knowledge I had growing up in Seattle public schools, where because of my zip code, I had a really great public school education, where had I been born a few blocks south I wouldn’t have. Just knowing that inherent inequity in education is wrong, knowing I could do something about it that would both allow me to have an immediate impact and to have a real, long term impact in education and beyond.

DO: I think the reason the commitment is two years is very intentional. Only about 10 percent of people come into TFA having studied education, a stat from a couple years ago is that only 15 percent of people in TFA think they will stay in education long term, and two-thirds end up doing so, either as teacher or in other capacities, such as principals or school counselors, things like that. I think there needs to be a short enough commitment that isn’t so daunting to people to ensure that they get into the door and enter the profession to see what kind of impact they can have and see how rewarding, challenging yes, but rewarding the profession truly is. I think by the end of the second year you’re convinced of several truths. You understand that your kids are capable of anything, you understand that the role of a teacher is incredibly important, and you understand also that this is a really complex issue. I saw how it was not just about disparities in education, it was also about challenges in healthcare and housing and nutrition and transportation, the list goes on. It’s critical that we do choose to stay in education but that we also choose to advocate outside education for students.

The Vox article you mentioned, I believe it quotes the 86 percent figure, that 86 percent of TFA alumnae stay…either directly working directly in education or working on issues that directly impact low-income students or families, which I think is a testament to the transformational nature of that two-year commitment. And finally, a two-year commitment is actually longer than any new teacher actually makes. Early turnover in schools is a big challenge, nationally 50 percent of teachers leave within the first five years, and so the fact we do ask for that two-year commitment up front I think is an important show of stability.

CM: Since you brought up those initiatives the article discussed, do you think the TFA model would ever change to reflect those issues of commitment and what do you think the future of TFA looks like?

DO: Every year TFA tries to become more responsive to the schools and families and districts with which we partner, and the changes to the model that we’re talking about here, they’re a couple of big ones. One is…we admit more individuals during the spring of their junior year in college.... The second big change to the model being now we’re really trying to support alumni teachers who stay in their school the third, fourth, and fifth year….We recognize there is a need to try to enhance the stability within schools and communities and while also recognizing that each individual person has agency to choose how they want to advocate within this movement.

DO: I think what is unique specifically about the University of Chicago especially compared to some specific universities is just students are aware of the juxtaposition between the idyllic Hyde Park and being on campus here between a lot of areas in the South Side that are truly struggling, both with education and with other factors; housing, healthcare, etc., that I mentioned earlier. There are a lot of ways students are involved, both in Neighborhood Schools Program or other organizations that allow them to understand first hand some of the challenges but also some of the possibilities for impact. So I think that is uniquely important here in Chicago, and not all campuses have that opportunity.

CM: I’ve seen a huge presence of TFA recruiting around the school, and I wanted to know if you have a sense of how many applicants, both from UChicago and nationally, come in seriously committed to a career in education? How critical do you think that is for TFA or the applicant?

DO: I think having a real understanding of the issues, having a real belief that kids anywhere can achieve on part with anyone else, those things are essential, and I think having a history of demonstrating your belief, whether that’s through volunteering, whether it’s because you have yourself persevered through a very difficult education system and you know firsthand the issues here, I think those kinds of experiences are very important. Do you have to have a long-term commitment on the front end? No, I don’t think that’s critical, I think again, what I have seen for myself, if you had told me 10 years ago, when I was a senior in college, that I would still be engaged in this work with TFA, I would have been surprised. But I think that’s demonstrative of the transformational impact that teaching has on people, and again it reflects a greater fault in our society that it’s not as though a whole bunch of high-achieving high school students are saying, “What I want to do is teach.” There are some people who do that, but not enough; too often we push people to business, to law, to medicine. Too often it’s just because those are the prestigious careers, and I think if our society really focused more on considering careers in education we would see many more people come in knowing they want to be in education long-term and frankly that would strengthen our schools of education and have many other impacts down the line.

CM: You mentioned touching on diversity earlier. Teach for America has made a really big push to have more applicants and more teachers who have come from diverse backgrounds. As a recruiter, what sort of specific steps have you been taking to diversify the core?

DO: We’re very conscious of the need to be responsive to schools, communities, and districts. And we know that across the country, Teach for America teachers teach somewhere in the neighborhood of 90 percent of students who identify as either African American or Latino. And so it’s important. We have more individuals in the front of classrooms who share both the racial and socioeconomic background of their students. I rely on my own experience in the classroom as a white man. I could do a number of really remarkable things for my students but they could never really look at me and see themselves. Whereas down the hall, there was another Teach for America member who identifies as a black man. There’s just a different relationship there. And so I saw from my time in the classroom and I think most Teach for America Corps members are aware of that early on.

This year, a full 50 percent of our incoming teachers identify as people of color, 47 percent from low-income backgrounds, 34 percent as first-generation college students…. This is about building a movement around education, helping to ensure that students understand the power that they have. In terms of word-of-mouth, there’s a lot of relationship building from our current Corps members and alumni to individuals they might recommend and we talk to on campus. Talking to staff and faculty who work within communities of color. Sitting down and talking about the need for this past year, Teach for America launched a national campaign to get more black men into education. Nationally only 2 percent of teachers identify as black men; 6 percent of incoming TFA teachers do. It’s been a lot of work, honestly, and it’s been a gradual process. Now Teach for America’s diversity has about tripled the racial diversity of the national teaching [profession]. It’s really shown that with concerted effort, you can make a difference and ensuring that there are more individuals working in classrooms who share the backgrounds of their students.

This interview has been condensed and edited for clarity.