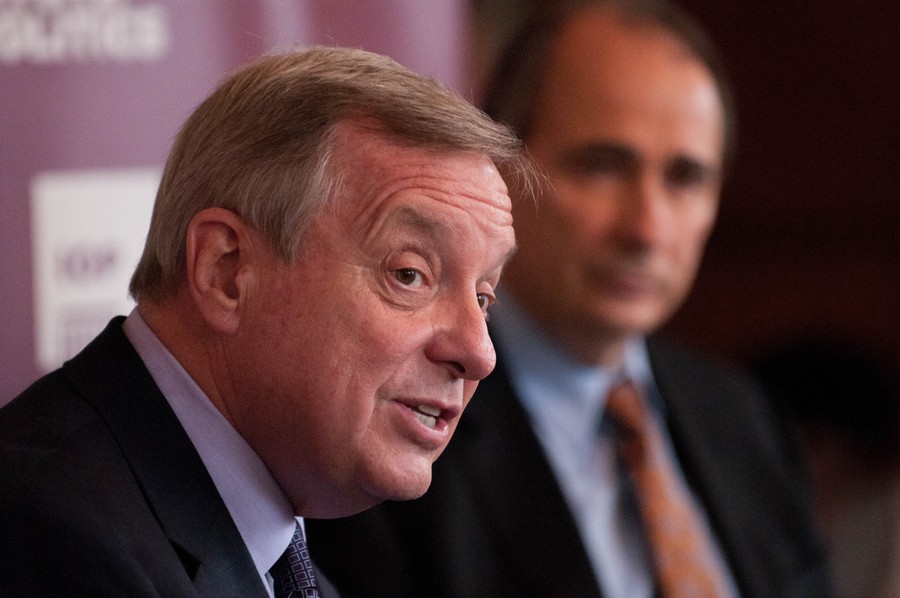 In a students-only session presented on Tuesday by the Institute of Politics (IOP) and the College Democrats, Senator Dick Durbin (D-IL) spoke about his party’s efforts to mobilize voters in the upcoming midterm elections, the problems with self-funded campaigns, and his efforts to reduce student loan debt. Durbin has served in the U.S. Senate since 1996, and is currently the majority whip.

With midterm elections approaching on November 4, Durbin is in the final stages of his current campaign. He faces Republican candidate Jim Oberweis (M.B.A. ’89), a businessman who has served in the Illinois State Senate since 2012. Although most polls show him leading by double digits, Durbin still expressed concern over the average 1.5 million–person drop in voter turnout in non-presidential midterm elections—1.2 million of which he said are Democrats. Thus, a major emphasis of Durbin’s campaign has been mobilizing Democrats to participate via vote-by-mail ballots.

“We have called out a list of 920,000 of these 1.2 million, and we’ve mailed them three times with these vote-by-mail ballots…. Results are starting to show up. In downstate counties, we are seeing as many vote-by-mail ballots as we did in a presidential year,” Durbin said.

Durbin said that he has tried to run a positive campaign, but blamed Oberweis for forcing him to change his tack. “I ran all positive ads…and then my opponent put in a million dollars of his own money and went on the attack this last week. Once that’s happened, you really have to create an answer, a response, to those. I wish that were not the case.”

This issue of personal spending in campaigns is particularly timely in regards to this year’s gubernatorial election, which Durbin called “very close.” Republican candidate Bruce Rauner has been chastised by Democrats for spending millions of dollars of his own money on his campaign. “Illinois voters don’t look kindly on self-funding millionaires,” warned Durbin. “We’re doomed politically. I think what the Supreme Court has done is set us on a course that is going to continue to escalate the expenditures on this. My fear is that there will come a moment when mere mortals will not even consider running for office.”

Durbin also spoke about his efforts to renegotiate student loan interest rates. A bill Durbin co-sponsored with Senator Elizabeth Warren (D-MA) would allow students to refinance their loans at lower rates, but is currently being blocked by Senate Republicans.

Durbin specifically called out for-profit colleges, referring to them as “a failure in higher education, virtually worthless.” According to statistics presented by Durbin, for-profit colleges receive 20 percent of federal education aid, and constitute 46 percent of defaulted student loans. “Congress is to blame—we’ve been complicit in this—and I think the administration should be a lot tougher on these for-profit schools,” Durbin said.

Durbin also touched on the hot-button issue of immigration. He spoke of his weekly visits to a transfer facility in nearby Broadview, IL, where he meets with people who are about to be deported and their families. “Half of them are there for technical immigration violations. Many of them have been in the country for years; many of them have families here. I think we should draw the line,” he said. “At some point, I think the president has a responsibility as a leader to use the powers given him, to solve the problems the Republicans ignore.”