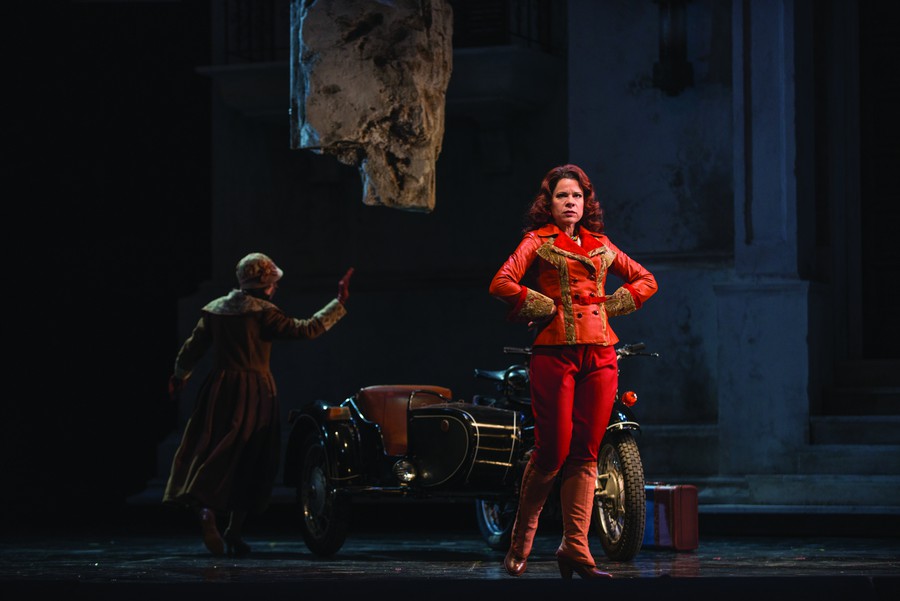 With his new production of the classic Don Giovanni, director Robert Falls promises a “distinctive and unusual updating of Mozart… a highly theatricalized world that uses the 1920s as a point of reference.” Your critic attended opening night at the Lyric expecting opulence, excitement, romance—and found instead Falls’s shortsighted vision, pretty but pointless. Or maybe that was a metaphor for the Jazz Age?

Don Giovanni is easily Mozart’s greatest opera, chock-full of incredible music and rich in drama. The story follows the misdemeanors of Don Giovanni (Mariusz Kwiecien), a playboy aristocrat who subscribes to a “love ‘em and leave ‘em” mentality. His chief weapon is trickery, by promising to marry his victim or disguising himself as her fiancé to have his way. Ultimately, the Don gets his comeuppance when his past comes back to haunt him.

Though diminished by a lackluster production, the brilliant cast did justice to Mozart’s remarkable music. Mariusz Kwiecien delivered a seductive, intensely unlikeable Don. His dark, menacing interpretation enhanced the character’s cruel streak, adding a nice bit of dimension to a role many singers coast through on good looks and vocal firepower. Kwiecien’s baritone was expressive and flexible, purring through his seduction duet “Là ci darem la mano” and blasting through the patter in his arioso “Finch’han del vino.” Especially violent and memorable was his performance immediately before the famous “statue scene”: Kwiecen’s raw, demented, animalistic Giovanni was thrilling and captivating to watch.

Marina Rebeka plays Donna Anna, Giovanni’s first victim who loses both her chastity and her father to him. Her impressive high notes pierced through Mozart’s heavy orchestration at key moments, adding thrilling treble scenes to the first act finale. Particularly good was her vitriolic “Or sai chi l’onore”—Rebeka peppered luscious *legato* lines with popping coloratura, spitting fury and anger and all the right notes. Weaker was her placid “Non mi dir,” which didn’t quite communicate Anna’s injured nobility. This lack of vulnerability was perhaps due to her sharing little chemistry with an utterly forgettable Ottavio (Antonio Polli).

As Donna Elvira, Ana María Martínez is a past tryst back for revenge. And boy, was she furious! The venom in her rage aria “Ah, chi mi dice mai” gave your critic life eternal: delicious, growly low notes bolstered a jabbing upper register for spectacular, exaggerated theatrical effect. Most importantly, Martínez nailed her character’s ambivalence in the second act. She understood Elvira completely and delivered, exposing her as a reluctant avenger in the trio “Ah taci, ingiusto core”. Her haunting showstopper “Mi tradì quell’alma ingrata” fell short of brilliance, however, but through no fault of the singer (it was an overzealous tempo on the part of the conductor). Martínez’s voice and characterization were flawless, projecting sincere tragedy.

Kyle Ketelsen delivered a loveable performance as Leporello, Don Giovanni’s mischievous valet. In an unexpected twist, his comic patter aria “Madamina, il catalogo è questo” moved from mocking to sympathetic, with a cute hug for Elvira at the end. Ketelsen’s boisterous bass brought out the irony in the recitative, no problem: your critic was pleased with his solid grip of humor and timing, which gave some of the libretto’s mustier jokes much-needed freshness.

If the singers succeeded, however, it was in spite of Robert Falls’s distracted, incoherent production. If Falls intended to use the “1920s as a point of reference” to modernize the opera’s theme of class struggle, why appropriate only the haziest, least recognizable elements of the Jazz Age? Moreover, to theatricalize a time and place with “an established aristocracy, peasantry, and middle class” is to keep the context of a traditional interpretation intact. Far more transformative would be a Don Gatsby (set in 1920s West Egg) or—even more daring—Frat Giovanni (exactly what it sounds like).

So much for the vision; on to its execution. Aside from a few key wardrobe pieces—chiefly the purple shearling coat on Kwiecen, and Martínez’s Amelia Earhart getup, complete with knee-high spats—the costumes were historically ambiguous, with the peasant garb reading more 1800s Italy than 1920s Spain (again, why bother?). The sets, though grand and breathtakingly detailed, felt like a jumbled Viewmaster through the ages: a La bohème-style café, a Rococo garden, a New Age-y statue of the Virgin Mary. And can we talk about the groping? A little manhandling is fine, opera needs all the ticket sales it can get, but too much takes Mozart into soft-porn territory. Don Grope-on-me, if you will.

Sir Andrew Davis was largely flawless in the pit as usual, directing the Lyric orchestra with finesse and panache. However, in certain numbers your critic found his choice of tempi regrettable: taking Elvira’s aria “Mi tradì quell’alma ingrata” quickly diminished its tragedy to mere inconvenience. If that was unfortunate, then the famous “statue scene” was an absolute disaster. Originally marked a slow adagio, Maestro Davis took it closer to allegro vivace—which is ironic given that the statue is dead and shouldn’t really sing at a quick and lively pace. Whatever tension and drama concentrated up to that climactic scene evaporated instantly.

That is not to say that your critic loathed the show. How could he? The Lyric delivered stellar singing, largely faultless orchestration, and breathtaking sets. To the contrary, he enjoyed it immensely for what it was—a solid, unorthodox Don Giovanni.