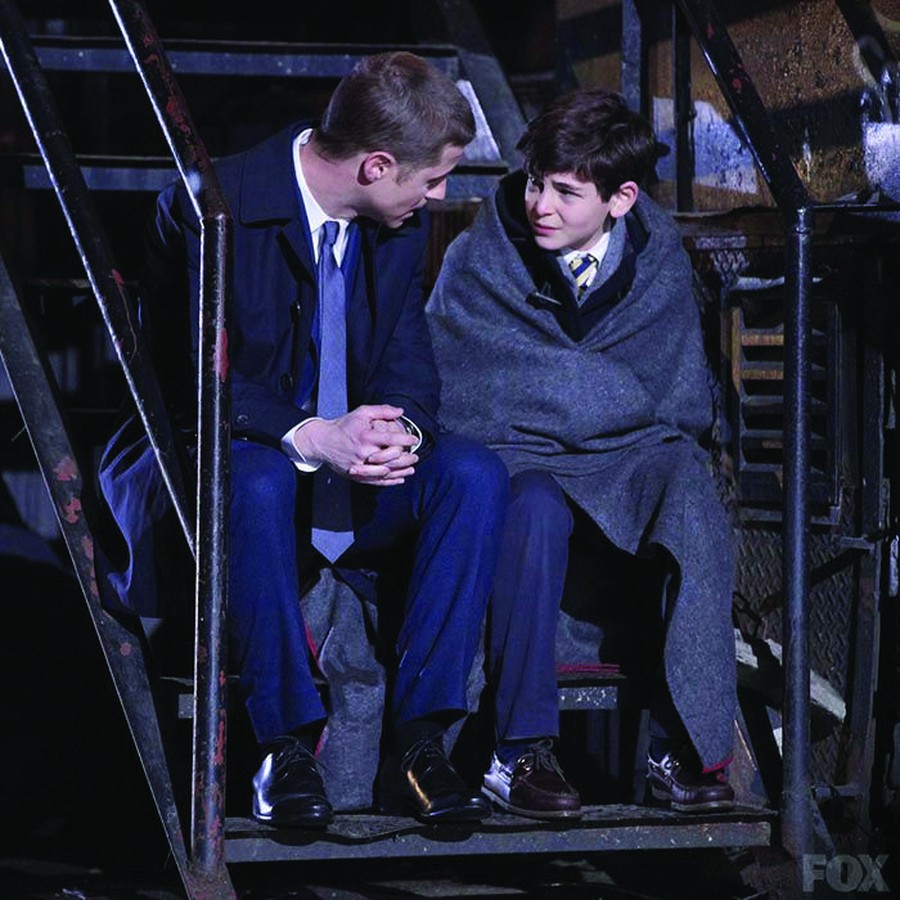 The first thing that strikes you about Fox’s Gotham is the look. It opens with sweeping aerial shots of the titular city, a blend of New York and Chicago with a hint of a Depression-era aesthetic borrowed from Christopher Nolan’s recent films. We go down further, to a splendidly neon vision of Gotham’s Chinatown. One of the best things about the series’ art direction is the willingness to liberally color its environments, resisting the temptation to go full dark and grimy to match the subject matter. All things considered, this is one of the best-looking shows on TV this year, maybe the best after HBO’s superbly directed True Detective. However, as seen in True Detective, you should never judge a book by its cover, and you should never judge a show by how pretty it is.

We get one more nice aerial shot following a teenage Catwoman entering the inauspiciously named “Crime Alley.” You probably know the story from here. Enter young Bruce Wayne with parents, followed by assailant; parents shot; scream of despair. Every action, every line, every movement by the actors seems laborious and forced, perhaps in part because of the script which has been played out so many times before.

Gotham is a “fresh” take on the origin story of Batman, this time told through the perspective of the Gotham Police Department, specifically young Detective Jim Gordon (Ben McKenzie). He’s out to find as many future Batman characters as can be fit into a pilot episode (at least nine, probably more), presumably to prepare for his future role as Commissioner of a city rife with super villains. But first he has to clean up the absurdly corrupt police department while dodging interference from his veteran partner Harvey Bullock (Donal Logue) and the show’s erratic scripts.

The warning bells start ringing when Gordon arrives at the scene of the Waynes’ murder. Gordon attempts to comfort young, traumatized Bruce Wayne with more stilted dialogue, ending with the old faithful, “There will be light.” He repeats this line, presumably for the benefit of viewers who were not quite sure they had heard such a line uttered in a 2014 major drama.

Some of the writing can probably be classified as early jitters, since it becomes much more palatable as the show goes on.  By the second episode, the real cringe-inducing lines have been ironed out and at times the dialogue even rises to a fairly competent level. Some of the best scenes come around when Gordon and Bullock are allowed to banter with each other or with the criminals they deal with. In these scenes, Gotham shows real potential as a semi-light-hearted buddy cop show set against the dark mythos of Batman.

However, perhaps feeling the pressure of the capital D “Dark” subset of superhero films kicked off by the Nolan movies to which this show probably owes its existence, Gotham is determined to go in a direction that may ultimately undo it. Some actors expertly navigate the scripts’ problems and ultimately rise above them (Jada Pinkett Smith appears as mobster Fish Mooney; her performance is a pleasant surprise). Others manage to tread water and maintain their dignity through the more suspect lines (McKenzie). But some cannot cope and their performances go the way of the perpetually doomed Wayne family (Erin Richards as Gordon’s girlfriend Barbara).

The best thing to say about the show is that it is trending up. The second episode, unburdened of the need to introduce the setting and characters, does a good job building suspense and maintaining a clear line of action. But we’re still talking about a show that is striving not to be good, but merely to be competent. Until the show settles into an identity that doesn’t hinder its cast, competence looks like the show’s ceiling.