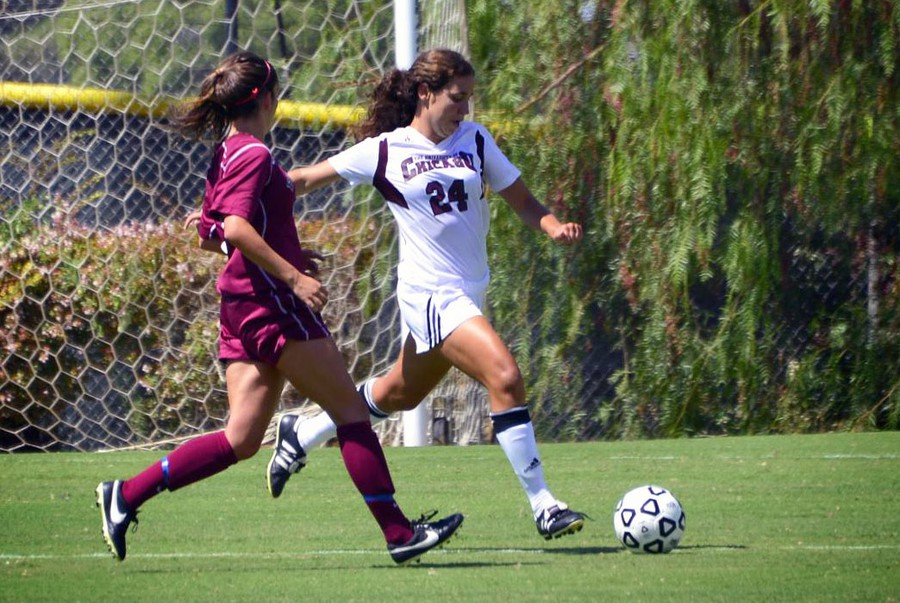 For the past month, the Maroons have put together an absolutely tantalizing display of skill on the defensive end, as they have managed to give up only three goals in their previous eight matches. They hoped to continue that play this past weekend.

As the No. 13 South Siders traveled to the East Coast to take on Rochester (5–6–3, 1–3–0 UAA) last Friday, there was no reason to expect anything different from the Maroons (11–2–1, 2–1–1), as they looked to improve upon their record against their conference competitors.

The game started out slowly, as both teams remained in a gridlocked 0–0 score until the 37th minute, when third-year forward Julia Ozello drilled a pass from fellow third-year forward Mary Bittner into the back of the net. While Chicago was able to put another goal into the net in 84th minute, courtesy of third-year midfielder Nicole Mullen, the point wasn’t necessary, as the Maroons were able to ultimately shut out the Yellowjackets by a score of 2–0, the South Siders’ fifth in their last seven matches.

According to Mullen, such an unbreakable wall on the defensive line was no surprise, as she lauded the performance of her defense, including fourth-year goalkeepers Mallory Morse and Jacinda Reid.

“Our defense and goalkeeping was solid all weekend long. Our defenders consistently won individual battles all over the field,” Mullen said, “Both Mallory [Morse] and Jacinda [Reid] were unbeatable in the net with some great saves and communication. [First-year midfielder] Whitley Cargile and [third-year defender] Bethany Robinson were both exceptional defenders.”

For the South Siders, there was no time to rest on their laurels, as they didn’t head back to Chicago after their victory in Rochester. Instead, the Maroons headed to Cleveland, OH for another conference battle, this time against Case Western (8–3–3, 1–2–1) on Sunday afternoon.

While the Maroons came out of the gate strong with five shots in the first half, none of them were able to sneak past the fast hands of Case’s goalkeeper, fourth-year Abbey Smith. On the other side of things, the South Siders’ defense played their typical game and were able to stop any advances by the Spartans into Chicago territory. There was certainly some frustration for the Maroons, as they struggled to break the 0–0 score.

“Case packed numbers in, and we didn’t execute our game plan to the best of our ability,” Mullen said. “We were able to still create some chances in front of the net that we were unfortunately not able to capitalize on.”

In the second half of play, the Maroon offense had a hard time getting anything going, managing to fire only one shot on goal in the entire half. Thus, when regulation came to a close, the Maroons and Spartans remained locked in a 0–0 tie, which meant that Chicago went into overtime for the third time this year.

While the Maroons won their two overtime matches earlier this year, this trend did not hold Sunday, as the South Siders and Spartans remained scoreless through 20 minutes of overtime, and the game ultimately ended in a 0–0 tie.

“Even though we were disappointed with our tie with Case, we have set ourselves up to have a great season, and we are ready to take care of business these next few weeks and finish our regular season with some wins,” Mullen said.

After playing four consecutive conference matches, No. 13 Chicago will take on nonconference foe No. 6 Wheaton (12–1–2) on the road on Thursday at 7 p.m., in a battle of nationally ranked squads.