"Though Strau draws from “clichés,” The New World, Application for Turtle Island is surprisingly fresh and playful." 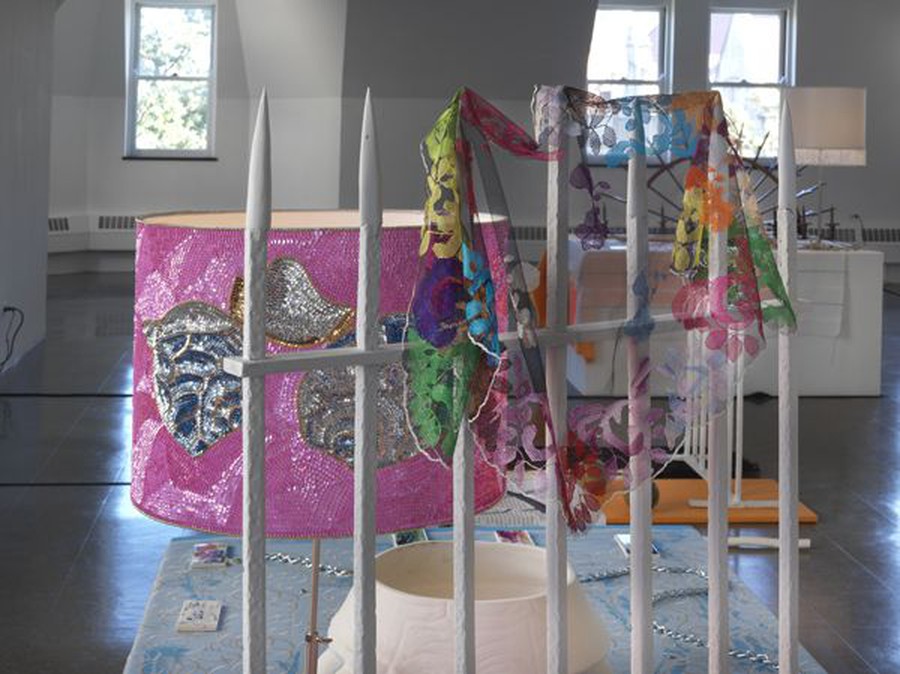 The Renaissance Society currently displays artist Josef Strau’s first solo exhibition in the U.S.: an eclectic installation titled The New World, Application for Turtle Island. Through careful manipulation of found objects, lamps, and written reflections, Strau documents his experience as one of a long line of European immigrants entering the Americas. Perhaps more importantly, he offers his work as a thank-you note, expressing his gratitude for the compassion he found in the New World.

When entering the exhibit, the viewer is both intrigued and bewildered by the possibilities. The space is open and unordered, encouraging visitors to choose their own path and to meander along. In a written statement, Strau likens the exhibit to “a visual arts adaptation of an adventure fantasy novel.” That aspect of choose-your-own-quest gives each viewer the opportunity to create a unique experience: inspecting the three-dimensional installations from different angles while walking over the exposed electrical wires.

Strau juxtaposes industrial, manufactured elements with knickknacks that may have once populated a dumpster. Platforms of different heights display these unusual pairings in seemingly accidental compositions: piles of white-painted sticks and chains carelessly tossed, brightly colored floral laces draped at random. He uses a slew of different lamps: Many are gray IKEA wannabes while others are bedazzled in colorful sequins. Some lamps still have their plastic wrapping on the stems, only half-assembled; others are draped in threadbare afghan scraps. The variety of material Strau employs overwhelms any unifying message at first. But at the same time, the works don’t appear chaotic. Eventually common motifs become clear: Each installation carefully balances its disparate elements. Even the empty Red Bull can tucked in a corner of “Macaw” carries the solid weight of deliberateness.

Like many artists, Strau wants to champion freedoms of creativity, but for him, specifically “the freedom to incorporate clichés.” He draws on the history of both violence and generosity between Europeans and the New World, referencing cultural icons such as Black Elk, Moctezuma, and the Virgin of Guadalupe, along with works such as Terrence Malick’s film The New World and Peter Handke’s novel Short Letter, Long Farewell. On the other hand, Strau actively contributes his own creations, through media such as text and textile. In addition to utilizing “found” fabrics, he creates his own prints and sequined lampshades. Many works also include passages of his stream-of-consciousness writings. This exhibit is an intersection of the collective and the personal, championing both the independence of the immigrant entering his own “New World” and his dependence on acceptance from his new home.

This idea of flexible barriers—the inherent foreignness and gradual assimilation of the immigrant—expresses itself in nearly every work. Strau explores these obstructions in multiple dimensions. Take “Freight,” for example: White metal fencing stands next to a pile of rusted spikes and a sheet of fabric printed with an image of the same fence. He draws from his environment (assuming he didn’t manufacture the iron oxide) and his own experiences by translating physical barricades onto a flimsy fabric surface. Nearby, in “Guadalupe Speaks,” a steel railing draped with metal chains partitions the artwork through the middle. However, Strau manipulates these symbols of restricted entry to appear unassuming and adaptable. His ropes and chains lay limp, with no tension, and the viewer is free to walk around both sides of the fence. When interacting with the installations, the viewer, like Strau himself, feels a sense of welcome in this “New World.”

Though Strau draws from “clichés,” The New World, Application for Turtle Island is surprisingly fresh and playful. His white sculptures of two cartoon-like bear and wolf characters journey through the exhibit. These smiling fellows are often posed dramatically “rowing a boat”—really just holding sticks and sitting on a green cart—toward a mystical turtle à la every adventure novel cover. They tell a story about Strau’s own personal encounters with the compassion of the Americas, as well as those of all the immigrants who came before him. Strau summarizes the tale: "it is all a kind of collection resulting from a life without much stability, with the hope of one day getting somewhere and finding a home.”

Josef Strau’s exhibit will be at the Renaissance Society through November 9.