Ghosts of Hyde Park almost as scary as impending midterms

"'You can sometimes see a woman's face in the window,' Fairbanks said. The ghost of Dean Art, perhaps?" 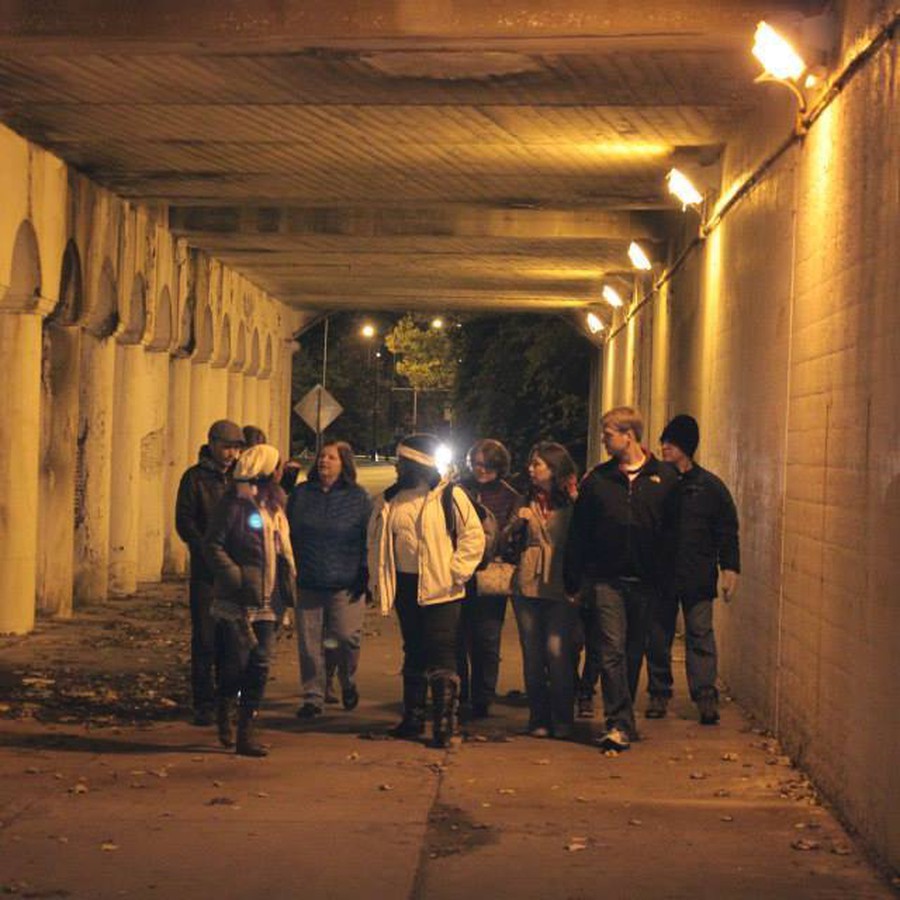 Courtesy of A Taste of Hyde Park

On a dark, chilly Wednesday in late October, I found myself standing under the 57th Street Metra stop, hoping to catch sight of famed defense attorney Clarence Darrow. Darrow’s is just one of countless souls said to haunt Hyde Park, and among the friendliest—a great first meeting for a newbie paranormal investigator like myself.

The lead ghost hunter on the scene that night was Greg Fairbanks, a youngish dude with a newsboy cap, a Transformers hoodie, and a pretty nasty chest cold. “A group had me out in the rain a few days ago,” explained Fairbanks as he led a small group of paranormal enthusiasts toward the under-lit back lawn of the MSI building. A victim of his own success, Fairbanks has been living in Hyde Park for 13 years, but the idea to do ghost tours of the area only came to him this fall, apparently the result of demonic possession. “I made a deal with the devil,” he explained of his Haunted Hyde Park Tour, “aka Groupon.”

For a nominal fee, guests on the tour (tours began on October 15 and run through November 2) were treated to a walking tour of Hyde Park’s spookiest landmarks, among them H. H. Holmes' prowling ground at the World's Fair site, the old elevated train stop on East 59th Street, and Robie House. I was surprised to learn that this last spot—the angular masterwork of deranged madman-cum-architect Frank Lloyd Wright—is not only an eyesore but a house of horrors as well. The overwrought mansion is apparently uninhabitable, pushing out three successive owners in the first 16 years of its existence alone, all of whom experienced grave family tragedies while living in the house. “You can sometimes see a woman’s face in the window,” Fairbanks said. The ghost of Dean Art, perhaps?

And then there’s the curious case of Professor Ioan P. Culianu: noted historian, philosopher, and possible warlock. Culianu was known for his interest in the occult, and, according to Fairbanks, his “dabbling in the dark arts” might have precipitated his mysterious murder. Culianu was found dead in the Divinity School bathroom, a single bullet wound in the top of his head. Elaborate suicide? Execution by Romanian agents? Blood magic ritual? At any rate, Culianu’s ghost continues to haunt the Divinity School men’s bathroom to this day, and works the 1–4 p.m. Thursday shift at the café.

There’s also the infamous Lipstick Killer, who earned his moniker via a ghoulish message written in lipstick on one of his victims' walls. He didn’t commit his ghastly acts in Hyde Park, but he was a student at the University and apparently lived near Nichols Park, which is really quite spooky at night, even with its lamentably common street lamps. “It takes away a bit of the ambiance,” Fairbanks said of the recent additions to Hyde Park’s lighting system as we passed through the park. (“Hopefully nothing will be jumping out at us,” Fairbanks said before the tour began, “although I’m probably the fastest runner here.”)

The tour concluded with a terrifying last stop at Cafe 53 for Halloween-themed cupcakes, where Fairbanks told me of his nefarious plans. The ghost season might be coming to a close, but he hopes to use his encyclopedic knowledge of Hyde Park’s history for a year-round Urban Legend tour in its place. And, regardless, you’re always free to wander the campus’ dark byways on your own time. Ghosts, as they say, do not sleep—nor do they have to study for midterms.