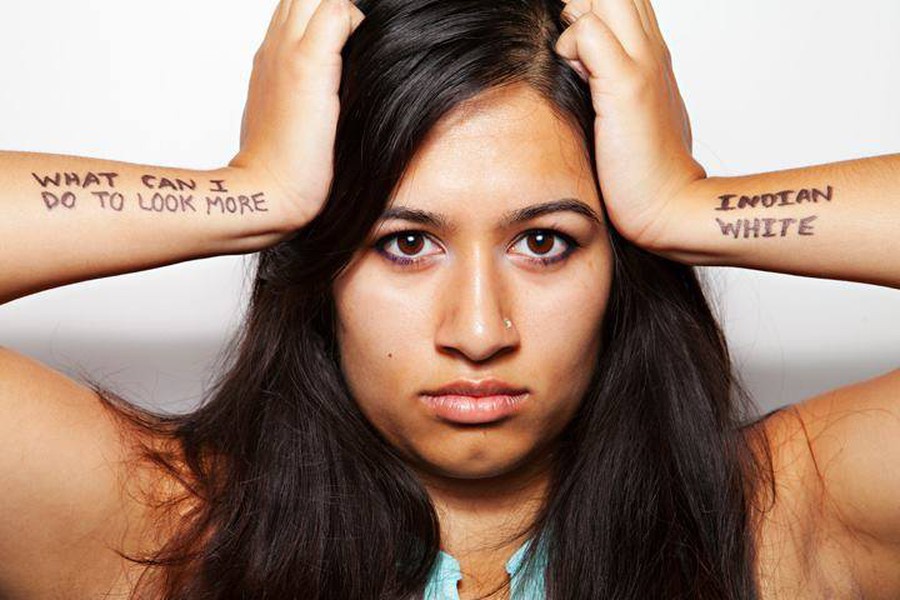 Third-year Medha Biswas recently played model for a photography project with more depth than your average 2-D print photo. “It took only 20 minutes, all in one session, just two pictures. That’s all we needed.” Photographer Steve Rosenfield worked with a group of UChicago students to create the What I Be project, which captures insecurities faced by everyone, every day. I sat down to talk with three female students who participated in What I Be on campus. The emotional impact on these women and their community has been exceptional.

Rosenfield invites his subject to talk with him about his or her “biggest insecurity” and then to pick a pose that speaks to them from previous portraits he’s taken. Biswas told me how comfortable Rosenfield made her feel; she was not forced to share, yet found herself talking about the first insecurities that popped into her mind. From their discussion, he pinpoints keywords and pens them onto his models with a black sharpie. In her photo, Biswas holds her head with her hands outstretched at the elbows, her expression a mixture of confusion and contempt, brandishing the words, “What can I do to look more” written on her right arm and both “Indian” and “White” on her left arm. For Biswas, this was the perfect representation of her insecurity: literally labeling herself. Rosenfield brings these internal realizations to life.

Each model is asked to post their portrait on Facebook and write 500 words on their insecurity, titling it “I am not my ______." This fill-in-the-blank piece is the most significant factor, and can lead to the most impactful feedback. Fourth-year Riva Letchinger simply wrote “slut” on her forehead. It was her 500 words that gained true depth, rather than the shock value of such a harsh word. She titles her insecurity “I am not my clothing,” and goes into a full description of harassment, abuse, and rape that she has faced over the last few years. “I’ve never centralized all of my experiences of assault and harassment into one place before I posted the photo online so that was terrifying. But it was also really incredible to have upwards of 10 women reach out to me to tell me about their personal experiences with similar issues.” Now happy and healthy, at least as much as any college student facing days of midterms and nights of cold pizza, Letchinger shares her stories with other women in the hopes of opening a discussion about sexual assault that promotes awareness and self-confidence.

While Rina Friedberg, a fourth-year, wouldn’t quite call herself a model, she found herself in a position and pose to model honesty to her community. Friedberg wrote, “I am not my reality,” to accompany her headshot. She splattered the words “I can’t be perfect” around her face, a sentiment I’d wager most UChicago students feel more often than they’d like to admit. On contributing this sentiment to the project and her community, Friedberg told me quite honestly, “I had no idea what my insecurity would be, and I think I immediately recognized in some of the models a bravery I could not put forward, but I wanted to contribute to it in some small way. We’re under so much pressure here, constantly, and I think it’s completely unhealthy to try to maintain the image that nothing’s wrong. Sometimes it becomes too much, and that’s not unusual, and it shouldn’t be isolating. I guess that’s what I hope people can take away from this.”

Although it seems these students and Rosenfield are on a mission to share awareness of imperfection and insecurities to their family and friends, they did this primarily for themselves. While Letchinger shared some of her most intimate fears and triumphs, Friedberg kept her input more general in an effort to express a sentiment to an entire student body. All three girls received overwhelmingly positive feedback, though. When asked about posting something so personal online, Friedberg was the first to admit her apprehension. “Because I went into the project with its public nature in mind, it was relatively easy for me to share the image afterwards. I’ve talked to some friends for whom I think it was a bit more emotional. I was insecure about it—my picture is all about admitting to a façade, and the utterly unrealistic nature of my own. That’s a scary thing to post on your Facebook for everyone you know to see and judge! That said, though, I’ve gotten wonderful feedback on the project. I honestly felt overwhelmed at first with the support I received from friends, some of whom I hadn’t spoken to in a few years, about the image.”

Fifteen years ago, Rosenfield had a successful finance job in Boston, a bodybuilder physique, and a “typical ego,” as he puts it. The worst part about his seemingly happy life: He just wasn’t happy with himself, nor with his materialistic outlook. After making the decision to get out of his funk, Steve began to share more of his feelings and his own insecurities with friends and family. Fast forward to the What I Be project, where Rosenfield is sharing his worst-kept secret: sharing insecurities. It worked for him, and now he’s seeing if it works for strangers. It’s always positive to have a reminder that we’re all in the same boat. Initially, his project goal was to involve around 150 people and make it into a book; months later, What I Be has included more than 4,100 people. You can hear the excitement in his voice when asked about what his vision has become: “It’s been a great journey, for sure.”

When asked on the statistics of sorts of his project, Rosenfield told me that most universities struggle with the exact same problems, unsurprisingly. The most prevalent insecurities he hears revolve around depression, anxiety, and eating disorders. Then, those are followed by a diverse spectrum from race to sexuality, which act as personal anecdotes to the stories relevant to national news today. Rosenfield told me, “Everyone judges each other, but what it comes down to, really, is don’t judge people for things that aren’t true, or even if they are, just not knowing someone and still calling them a name.”

Steve is very impressed with the bravery exhibited by his models. It’s a courageous step be photographed, especially knowing the photos will be on Facebook, when they focus on a subject as intimate as insecurity. After talking with Friedberg, Letchinger, and Biswas, it’s obvious that they emanate empowerment after having made it through this process, which was both cathartic and overwhelming for all of them. If nothing else, the UChicago community has responded well; they’ve shown that voicing a fear or problem is not a weakness, but something quite audacious. Before I finished talking with Rosenfield, he summed up exactly what I took away from his project. “There’s something really beautiful about people taking their walls down, allowing each other to be honest. Who needs to hide anything when we all struggle with something? We need to focus on working together to help each other— that’s why sharing can be brave. I am starting to see that from the UChicago community.” His statement encompassed the goals of all students involved in his project: Voice your insecurities, because through sharing, even through Facebook, we’ll only strengthen our community.