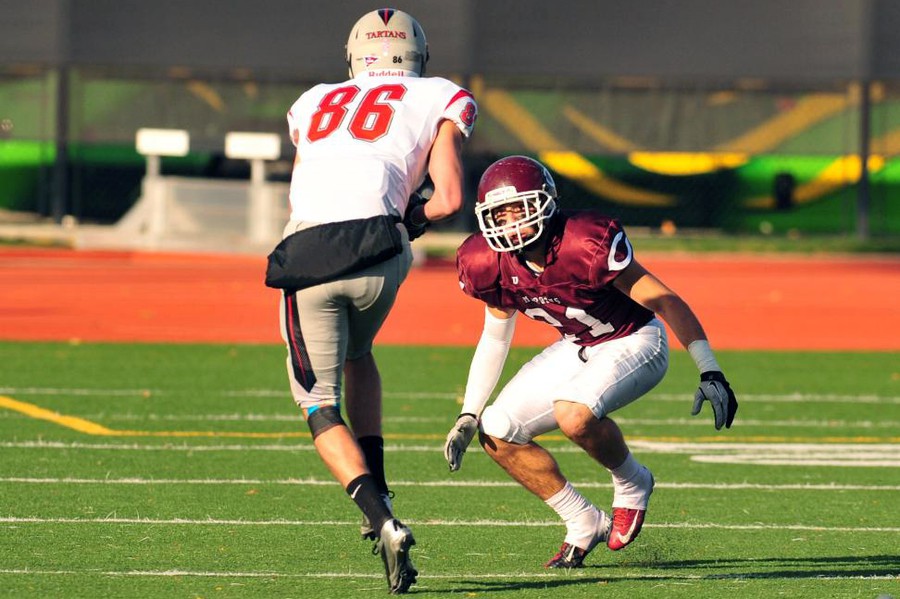 The second annual Blues Bowl between the Maroons (4–0) and Rhodes Lynx (4–1) was the perfect setting for a depressing, introspective, bluesy jam sesh: rain, wind, and a sense of despair filled Stagg Field as undefeated Chicago found itself down 14–6 with five minutes left in the game.

Then, as though Buddy Guy himself willed it upon them, the Maroons finally found their footing. After the top-ranked Maroon defense forced a turnover on downs, fourth-year quarterback Patrick Ryan marched his team down the field for its second touchdown of the game, passing for 67 yards on three completions, concluding with a touchdown to third-year receiver Sam Coleman. A successful two-point attempt to second-year tight end Brian Welch evened the score at 14–14 with 4:11 left on the game clock.

In the next Rhodes possession, the Maroon defense again proved its stinginess. In his usual clutch fashion, third-year defensive back Vinnie Beltrano intercepted third-year quarterback Blake Box’s pass attempt and returned it to the Lynx 29-yard line with three minutes left in the game.

Ryan then connected with Coleman yet again on third-and-19 to earn a first down and bring the Maroons into field-goal territory. After burning some clock, Chicago brought out its field goal unit.

Third-year kicker Karol Kurzydlowski, who had missed a point-after and field-goal attempt earlier in the game, kicked it right through the uprights with 12 seconds left, giving the Maroons a 17–14 lead and the eventual victory.

“We were ecstatic to win the game in such an exciting way, but obviously there are things we could have done as a team to avoid getting ourselves in a fourth-quarter hole,” said fourth-year defensive lineman and team captain Scott Mainquist. “But it was awesome to see our team respond so well to the adversity.”

The Chicago defense, currently ranked first in the nation in yards allowed per game, sparked the comeback with three forced turnovers in the final five minutes.

“In the fourth quarter the defense basically knew we had to get quality stops and get the ball back to the offense in a position to score. We had the mentality that we had to leave everything we had on the field and execute, or we wouldn’t win,” Mainquist said. “The combination of turnovers and execution in the passing game late in the fourth quarter were the sparks that led to the comeback. Pat [Ryan] and Sam [Coleman] really caught fire at the end of the game. I don’t think we win without their playmaking ability late in the game.”

Ryan and Coleman connected on six passes in the fourth quarter for 112 yards. This included two third-down conversions in the last three minutes to keep the ball in Chicago’s possession. Fourth-year running back Zak Ross-Nash ended the game with 97 yards on 18 rushing attempts and one reception. Rhodes’s third-year running back, Kevin Vieira, rushed for 101 yards on 27 attempts.

This is the second straight year that Chicago has started the season 4–0.

With momentum in hand, the Maroons head to Texas next weekend to play Trinity University (1–4).