Interstellar: Nolan's grand vision gets a little lost in space 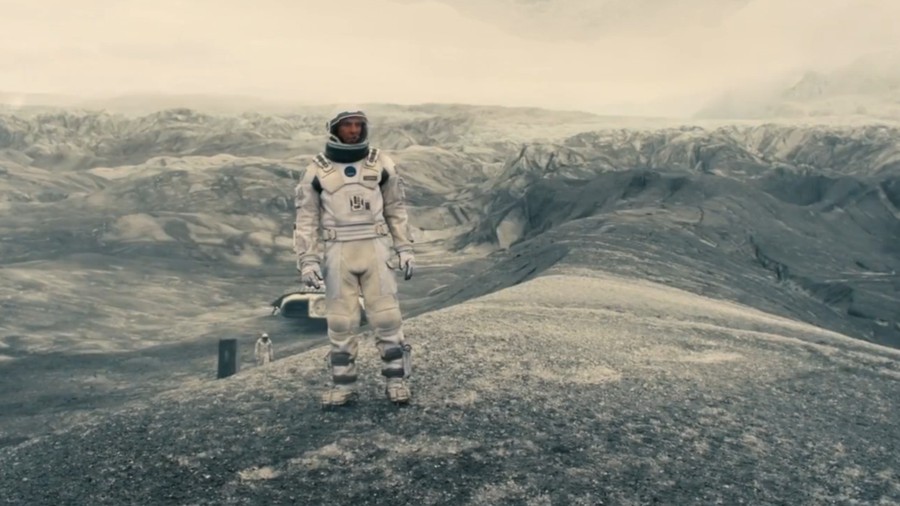 At its heart, Christopher Nolan’s Interstellar is about how love is the most important and far-reaching force in the universe; it is about how, no matter how far we travel, we’ll always come back to our loved ones. It is fitting, then, that after nearly three exhausting hours of run time and vast imaginative settings, the film still comes back around to such a simplistic theme.

This sounds far harsher than the real impression Interstellar gives its audiences. The eye-rolls only start toward the end of the film’s star-bound journey, as the film finally lets loose and wears its heart (as well as its homage to Kubrick’s 2001: A Space Odyssey) on its sleeve like it wanted to all along. Interstellar is almost derailed by this ending, but, by that point, Nolan has already entranced and dazzled us with his magnificent set pieces, each of which are fused from cutting-edge special effects and an increasingly rare dedication to on-location shooting. Calling on Hans Zimmer for score work doesn’t hurt either. This approach gives Nolan’s films a kind of gravity and intensity that other contemporary epics often lack, and audiences embrace them to the tune of hundreds of millions of dollars.

Given his love for the bombastic, it was probably only a matter of time before Nolan took on the space opera. Like most works of the genre, this one starts on Earth. Climatic disasters have crippled most of the planet's infrastructure, forcing the remaining population to run massive farms to eke out what little food the planet can still produce. Matthew McConaughey plays Cooper, a pilot and engineer forced to man one of these farms in a dystopian wasteland. STEM has become the new humanities on Earth, and Cooper is mocked for being overeducated and idealistic about humanity's role in the universe—that is, until a NASA physicist (played with typical gravitas by Michael Caine) tasks him with piloting a mission to locate and colonize a new home world for humans in a different solar system.

Cooper sets off through a wormhole accompanied by fellow astronauts Brand (Anne Hathaway), Romilly (David Gyasi), and Doyle (Wes Bentley), along with helpful two robots (Bill Irwin and Josh Stewart). Meanwhile on Earth, Cooper's daughter Murph (Jessica Chastain) works with NASA to find a way to transport the remaining humans to their new home. Hathaway is the only big name on the ship aside from McConaughey, but the supporting cast brings introspection, grace, and comic relief enough to create some potent scenes with their better known cast members.  A little over halfway into the film one more A-List actor, who has not been billed at all in the marketing, joins the cast. We won't name him here, since his surprise appearance is one of the more fun moments of the film, but he uplifts the penultimate act with some of the film’s most memorable scenes.

Nolan has never been known to use cinematography to coax the performances out of his actors, preferring to put the burden on the actors themselves to act within the given frame. Unlike Birdman, where Alejandro Iñárritu locates the lights in his actor’s eyes and the spittle from their mouths, Interstellar gives nothing to the actors that they don’t have already. As a result, some dialogue scenes can feel rote or clichéd, but for the most part this cast is up the challenge. Of the two best acted scenes in the film, one features only McConaughey's face, and the other just two of the actor's voices.

If the actors are left alone, then the camera’s eyes are reserved for the scenery and the action. Nolan's camera has always had a way of finding the energy in moving objects and the drama of set pieces. Like any recent Nolan film, seeing Interstellar in IMAX is well worth the jacked up price of admission. This film makes its earthbound shooting locations look otherworldly, and its special effects–born black holes and spaceships look real, every detail vivid and every sound piercing in the giant theater. It’s not quite as balletic as 2001, but it is beautiful in its own way.

Unfortunately, Interstellar loses its way in the final act thanks to Nolan’s determination to beat us over the head with “love” and “family” and a host of other non-nuanced themes in a twist this reviewer saw coming half an hour into the film.  It’s not even corny in a sweet way—it’s just corny.

Nolan has long been a director who dresses up relatively simple ideas in complicated cinematography and scenarios.  But it’s that synthesis that gives his films most of their appeal.  Most widely praised artistic directors earn their acclaim for their ability to nest the unfamiliar within the trappings of the familiar; Nolan has fashioned himself a master of nesting the familiar within the trappings of the unfamiliar.  Despite the cerebral concepts he favors, he doesn’t usually challenge us to think deeply, nor does he necessarily want us to.  He wants us to feel, and to be entertained.  And, despite what some film snobs will tell you, that is no barrier to being a great filmmaker. Christopher Nolan certainly is.