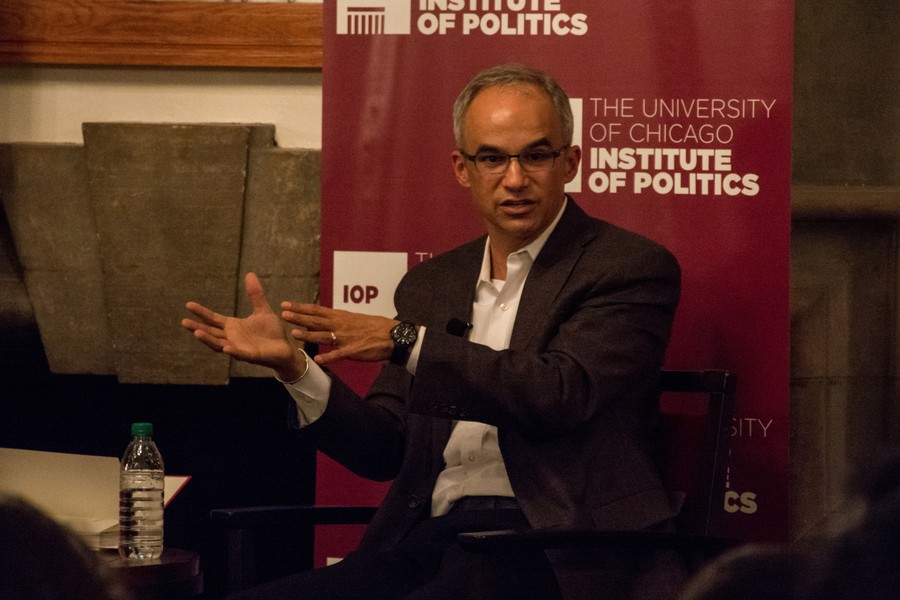 Latent racism in modern American politics is disadvantageous to the middle class, Ian Haney-López, a law professor at the University of California–Berkeley and author of Dog Whistle Politics, argued yesterday in a talk sponsored by the Institute of Politics.

Haney-López spoke at the Quadrangle Club about the connection between “racist” Republican policies and the decline of the middle class. Susan Smith Richardson, an expert on wealth inequality and publisher and editor at the investigative magazine Chicago Reporter, moderated the talk.

Haney-López claimed that the GOP’s platform is strategically—not expressly—racist, using coded political language since the 1960s to attract white voters. Like dog whistles, which are undetectable to the human ear, terms such as “illegal alien,” “inner city,” and “welfare queen,” imply anti-immigrant and anti-black sentiments and convey undetectable biases.

By appealing to voters’ biases, Republicans convey the message that big government wastes money on welfare for undeserving minorities. Once in office, Republican politicians can pursue an agenda of cutting government funding and giving tax breaks to the wealthy, he asserted.

This agenda undermines the social and economic stability of the middle class, affecting the white constituents that voted for it, by tilting the economy toward the 1 percent and away from the middle class. “If you want to understand the economic crisis in the middle class at large—not just the fate of poor minorities, but the 99 percent­­­—­­you have to think about how race is being used in politics,” Haney-López said.

He argued that dog whistle politics began in the 1960s when southern states resisted integration. Instead of using race as a justification, they fought for states’ rights. “‘States’ rights is an abstract concept and is easier to defend than bigotry,” he said.

Since the states’ rights debate, the country has experienced the “southernization” of its national politics with the spread of this kind of politics.

“This has been a concerted GOP effort since 1963, and we see it no more effectively than in 2014, when the three major themes of the Republican candidates were ISIS and Ebola crossing the southern border…along with the illegal aliens, presumably, plus Obama’s incompetence. These are all racially charged allegations,” Haney-López said.

Haney-López concluded by blaming the politicians, not the people, for the prevalence of racism in American society. “Most racists are fundamentally good people,” he said. “They’re not pathological—they’re reared in societies that create, that foster, that support empathy and engagement with some, but that also support dehumanization and cruelty and violence toward others.”