Football locked up the UAA title with a victory over Case Western 20–10 on Saturday. 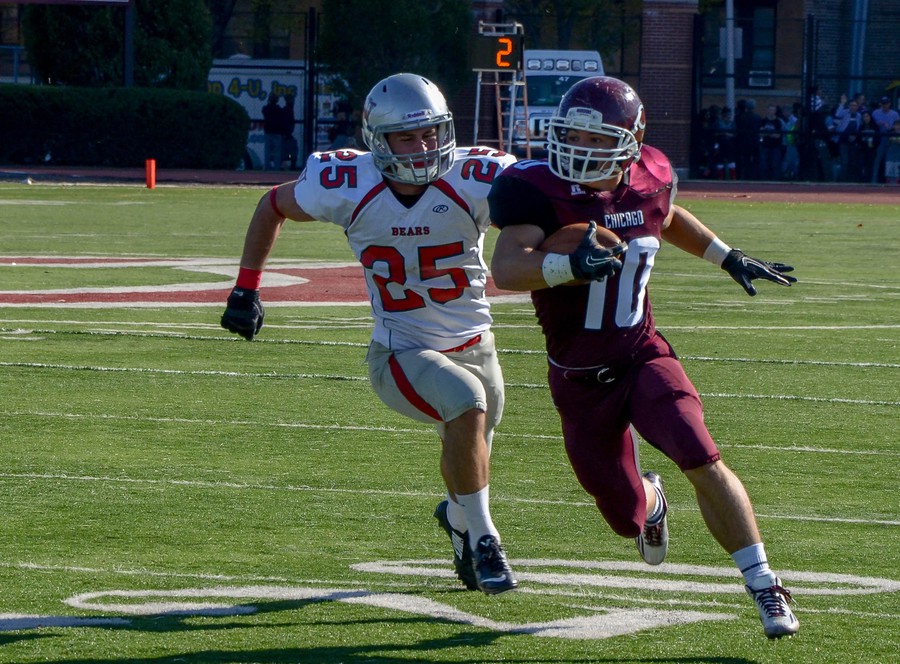 Chicago capped its season off in dramatic fashion, beating Case Western on Saturday in Cleveland by a score of 20–10.

Although the Maroons (8–1, 3–0 UAA) sealed their victory by a 10-point margin, the Spartans (3–7, 1–2 UAA) put up a good fight, as they put together a seven-play drive in the fourth quarter that, if successful, could have tied the game at 17. However, Chicago managed to force an incompletion on a fourth-and-sixth.

Chicago third-year kicker Karol Kurzydlowski made a 34-yard field goal after the turnover on downs, increasing the lead to 20–10. The defense secured the victory by stifling the Spartans’ final drive with an interception in the endzone on the final play of the game by third-year defensive back and team captain Vincent Beltrano.

“Any time your kicker takes the field and has an opportunity to seal the game, it’s going to be a game-changing outcome,” said fourth-year running back Zak Ross-Nash. “Karol [Kurzydlowski] has come through for us throughout this year, and we knew he would give his best effort to help us win the game.”

Besides his interception in the final seconds, Beltrano also scored a touchdown by retrieving a fumble forced by his teammate, fourth-year defensive end Brandon Bolock. Beltrano returned it 49 yards for a score in the first half.

“It was so sporadic that I didn’t have much time to think during the play,” Beltrano said. “Brandon Bolock made an amazing play knocking the ball out, and the ball found its way to me. The rest of the play, that being the score, was set up by great blocking and even better fortune.”

On the offensive side of the ball, third-year tight end Nathan Massey led the team with four catches for 36 yards, and Ross-Nash scored the only offensive touchdown on the afternoon with a six-yard run in the first quarter.

Massey was humble about the performance of the receiving corps.

“It just happened to be that we were able to get the throws to the open guy,” Massey said. “They did a good job of sending one or two guys to [third-year receiver] Sam [Coleman], so it opened up other people.”

This victory gave Chicago the UAA title. Next year, the Maroons will play in a different conference.

“We were pumped!” Beltrano said. “To be playing in a championship game in November is something that not many teams can lay a claim to. Therefore, it was an emotional game from multiple standpoints. It was the seniors’ last game, it was for a championship, it was the last UAA game as a conference, and it was the last game of the year for the underclassmen. And, thereby, could serve to propel us in the offseason.”

Unfortunately for the Maroons, despite winning the UAA’s last conference championship, their season ended on Saturday, as they were not selected to compete in the NCAA DIII playoffs.

Nevertheless, this has been a rewarding experience for the players.

“We truly have a special group, and it’s been an honor to play alongside these guys for the past 14 or so weeks,” Ross-Nash said.

He finished his last season with 695 all-purpose yards and nine rushing touchdowns.

Notable fourth-year contributors littered the squad this year. Quarterback Patrick Ryan led his team to an 8–1 record in his first year as a starter while throwing for 1242 yards and 14 touchdowns, with an impressive 135.6 efficiency rating.

Linebacker and team captain Schuyler Montefalco finished second on the team in tackles (59) and fifth in sacks (2.5).

Bolock arguably anchored the defense, though, leading the team in sacks (6.5) and finishing third in tackles (55).

This talented class of athletes and leaders will be dearly missed.

“When I look back at my career here, I’ll remember the relationships that we have created with each other,” Ross-Nash said. “I’ll remember this season for as long as I live.”