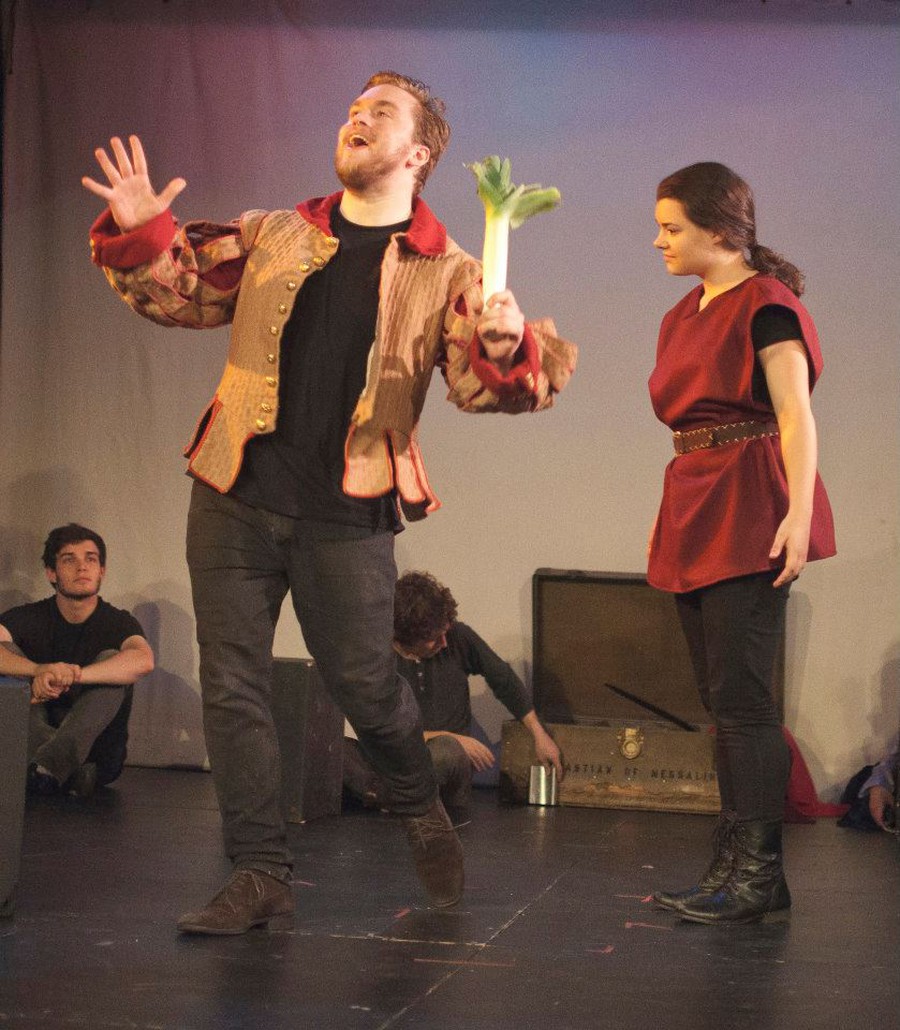 Probably the main reason why the general public doesn’t give a damn about Shakespeare anymore is that they assume his work is low on a) explosions and b) genitalia jokes. But the general public, I have noted, is almost always wrong, and any good 21st Century director of Shakespeare has to know this. When more than half of your audience has no idea what “ciphers to this great account” is supposed to mean, has never heard of Sir John Falstaff, and doesn't really give a damn about anything from the three prologue plays they didn’t read to the play they’re seeing which they also didn’t read—it’s not a question of “staying true to the text” with a play like Henry V, but a question of improving on and enhancing the text in meaningful ways. As director Jonathan Sorce has shown with the Dean’s Men’s fall production of Henry V, attempting to do such a thing is neither sacrilegious nor impossible.

Not even the most devoted Bardolator would accuse Henry V of being anything like a coherent play, but in Sorce’s hands (and with skillful cutting of some really nasty French-people-are-perverts scenes) the first half of the show almost feels seamless. We’re talking about a play that deals with—off the top of my head—issues of nationalism, loyalty, piety, collateral warfare, absolute monarchy, character reform, and metatheatricality, as well as, of course, the genitalia of both sexes. All these themes, even the metatheater, are strung up nicely by pitch-perfect staging and intense lighting and sound (somehow that “once more unto the breach” part gets freshened up by cannons exploding in the Reynolds Club) and wound around a main story purged of all the text’s imbalances and infelicities.

This story—which I guess I should mention is about ex-playboy King Henry V’s conquest of France—is anchored by the acting of two or three of the Dean’s Men’s main talents. Chase Woods as Henry V is delightfully serious, the only character that never once gets to have any fun (even when he’s beating up some poor French messenger for like the 10th time) which is great because everybody’s always talking about what a rabble-rouser he used to be. Woods’s Henry delivers the death sentence to his former co-thief Bardolph with the perfect combination of self-mastery and regret: “We would have all such offenders so cut off.” He can’t do it alone, though, because as everybody else in the play except for Henry (and including Sorce) knows, serious gets boring pretty quickly. That’s why it’s so crucial to have talented supporting actors like Michaela Voit and Carlo Bonacci, the latter of whom brings Pistol to life in a way I’m pretty sure Shakespeare never even dreamed of. Voit in particular has a dynamism here that’s just incredible: She plays at least 60 different roles including Nym and a fantastic Katherine of France, and switches between all of them so well as to arouse a kind of concern in the viewer.

The first three acts of this show, I stress, are accessible and funny enough to be enjoyed even by someone whose experience in theater ended with the “Waiting for Elmo” segment on Sesame Street; even if the language goes over your head, which it shouldn’t, you can’t deny that there’s a lot of passion, a lot of sheer effort, in the way the Bard gets bodied forth for us here by Sorce and his production team. The directorial voice is strong, and recognizable as distinct from the play, but you never get the sense that Shakes is being usurped. If in the second half of the show, the action kind of fits and starts—which it definitely does—then that’s a hazard of the (very strange) text Sorce is dealing with. In the original, Henry’s victory (spoiler alert) at Agincourt is kind of passed over: The battle is preceded by a scene in which a guy gets beaten up extensively with a vegetable and followed by a lengthy (but perfectly acted) courtship scene between Henry and the princess of France, which is itself then kind of discarded by the ominous final monologue from the Chorus.

The best Sorce can do here in the fourth and fifth acts is present the scenes one at a time, the way they were written. This is no easy task, but he pulls it off. Clearly this play is the result of a love affair with the quirks and triumphs of the text. Like all love affairs, this one involves a little bit of give and take. Directing Shakespeare 400 years later entails, by necessity, an evaluation of what the original stuff gets right and what it does wrong. Especially in the case of a play like Henry V, these decisions are hard to make, but the important thing is that they get made. Sorce understands this, as do his actors, and the result is a rendition that breathes life again into a puzzling but delightful text—a feat of which I’m sure Shakes himself would be proud.