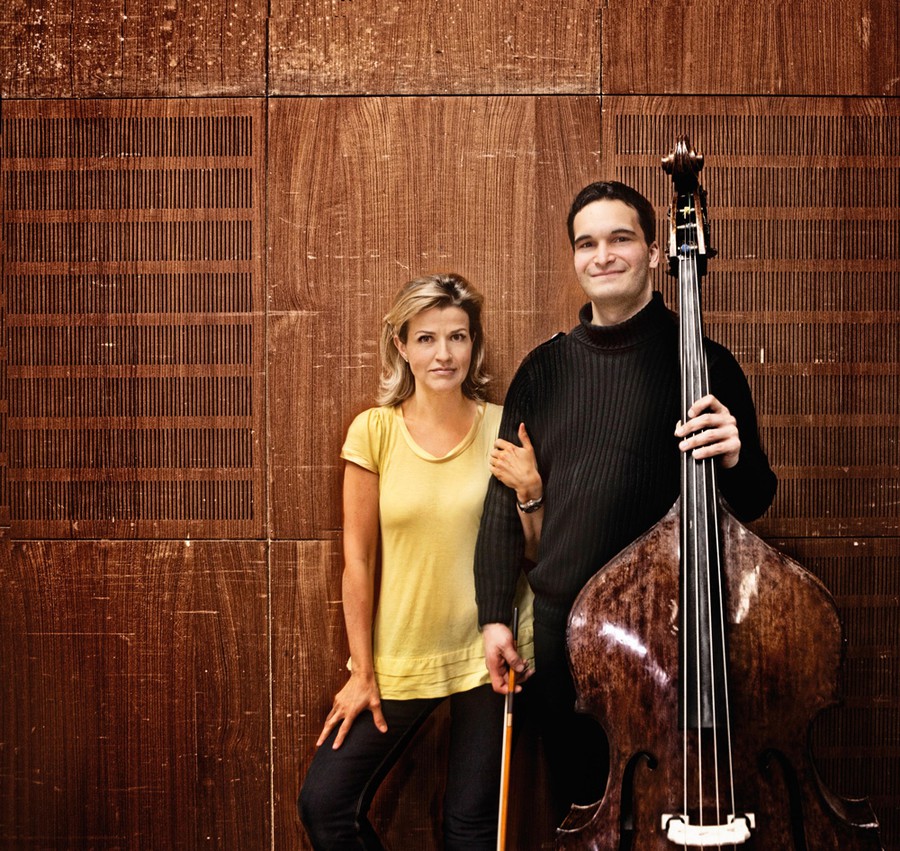 Having seen violinist Anne-Sophie Mutter perform before, the adjective that always seems to stubbornly stick to the walls of my brain as I leave the concert hall is “miraculous.” Wednesday night’s chamber concert at Symphony Hall alongside bassist Roman Patkoló and the Mutter Virtuosi was no exception.

The Virtuosi are products of the Anne-Sophie Mutter Foundation, a Munich-based foundation that gives scholarships to support budding string soloists through scholarships. The performance outreach element of the Virtuosi program gives these musicians valuable professional and touring experience, not to mention the opportunity to perform alongside one of the world’s preeminent classical violinists.

Mutter herself is a steadfast champion of both chamber standards and contemporary music, both of which were combined in her repertoire selection for the Virtuosi’s North American tour. Felix Mendelssohn’s Octet and Antonio Vivaldi’s Four Seasons were prefaced by Sebastian Currier’s Ringtone Variations, a piece which was premiered last year by none other than Mutter and Patkoló.

Mutter and Patkoló revived their commissioned work with seamless synchronicity and finesse for Wednesday’s program. True to its name, though not split into movements, the Ringtone Variations is structured episodically around common ringtone jingles. Lacking an overarching sense of direction, Currier’s composition introduces short themes in the form of recognizable aural snippets and, as the work progresses, warps them into something almost sinister. The piece, which begins innocuously, begins to disolve into outright aggression towards the middle—punctuated by grating attacks from Mutter and Patkoló—then ends unsatisfactorily and suddenly, with tiptoeing spiccatos. The listener is left struggling to string the piece together: Is the mayhem that dominates the piece’s middle section perhaps alluding to the interruptive role of technology in our lives? It’s an ingenious concept, to be sure, but Mutter and Patkoló’s musicianship was the real highlight of Ringtone Variations: Seamless and almost scientifically controlled, the duet's collaboration was a spectacle in itself.

The Virtuosi joined Mutter onstage for both the Octet and Four Seasons, and certainly lived up to their name. Performing each piece with vivacity and panache, each member of the ensemble proved themselves into outright aggression as soloists many times over. But in a chamber environment, there were times when the Virtuosi seemed to vie for attention where attention was not due: When the melody line was elsewhere and the ensemble members were playing ostinato accompaniment—in other words, a repetitive accompaniment meant to shelve itself underneath the melody—members of the Virtuosi writhed and swayed as though they were playing a solo line. To be fair, this was most apparent in Mendelssohn’s Octet, which, in calling for only four violins, two violas, and two cellos, features all of its constituents in a solo at some point, and acoustically, the performance was more or less properly balanced. However, it must be remembered that live performance is still a visual medium, and the effect proved distracting at times.

More tact was shown for Vivaldi’s Four Seasons. The Seasons are, after all, violin concertos, and thus the ensemble often finds itself playing under the soloist. Vivaldi’s most famous composition, obviously one of the mainstays of the classical repertoire and a turning point in concerto writing, proved to be the highlight of the night. Mutter’s solo turn, wonderfully supported by the Virtuosi, demonstrated exactly how the Seasons should be played: full of electricity, surface tension, and inventiveness.

The Seasons is not the easy listening casual listeners so often make it out to be. In reality, it is a work of extreme emotional breadth and sheer fury, and it demands a formidable deal of virtuosity from the soloist—look no further than the tumultuous, heart-hammering third movement of Summer. Mutter and the Virtuosi injected a great deal of interpretive liberty into Vivaldi’s otherwise sparse score, which often includes narrative asides in lieu of explicit technical direction. For example, in the first movement of Vivaldi’s Winter, instead of pointedly specifying that string players play off the string with a staccato or sautillé stroke, Vivaldi wrote Batter li denti (“chattering of teeth”): The meaning is to be inferred by the performer. Mutter, whose interpretations seem to be in a constant state of metamorphosis, took on the four concertos in a way that made them seem as fresh and new as they were when they were published in 1725.

In the end you could say that Mutter’s role in Wednesday’s performance was just as homonymous as the Virtuosi’s. The veteran of the concert hall, she was the modest mother to the ostentatious wunderkinds blossoming under her tutelage.  Something about Mutter captivates. Striking the perfect balance of control and lyrical expression is a tall order for any musician, but Mutter gets impressively close.

A miraculous leader for a miraculous program—surely we will not hear another interpretation quite like this one at Symphony Hall for some time.