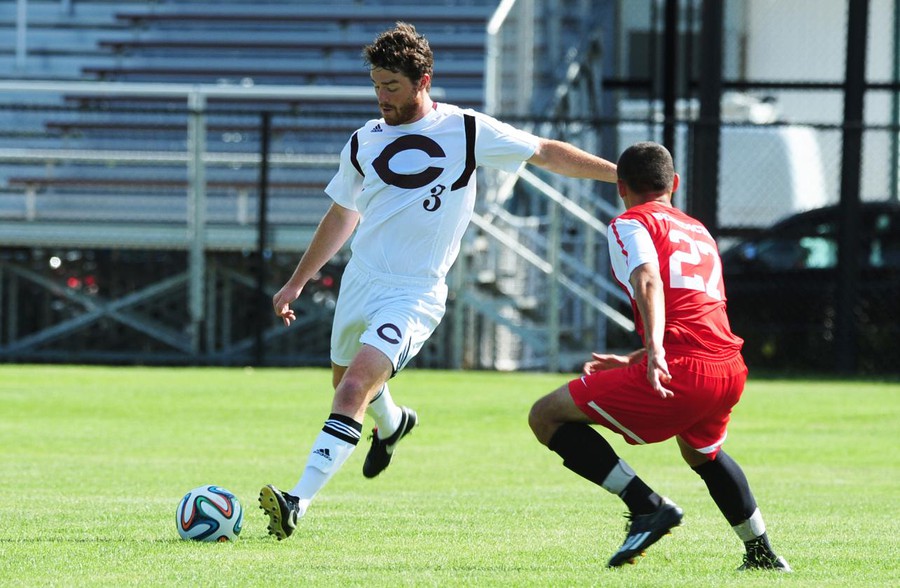 Victory is always sweeter after defeat.

Following a tough stretch of away games during the past few weeks, including a loss last Saturday, the Maroons hoped to come away with two wins in their final two home games.

This past Friday, the South Siders downed the NYU Violets; two days later, they impressively handed No. 3 Brandeis its second loss of the year and leaped into first place in the UAA.

However, it was a tale of two matches. Against the Violets (11–5–0, 2–4–0 UAA), Chicago (10–5–2, 4–0–2) battled against the elements as much as it did against the opponents. Runs were affected by hail, crosses by wind. NYU scored early in the second half to bring the score to 1–0, which was the first goal that Chicago had allowed in five games. With less than 10 minutes remaining, the Maroons looked likely to fall to the Violets. But, as if in their natural domain, the South Siders netted two goals in the final eight minutes of play, courtesy of fourth-year forward Kyle Kurfirst and first-year midfielder Andre Abedian, to claim a 2–1 victory.

Two days later, the Maroons adjusted from Friday’s unforgiving conditions to Sunday’s nervous excitement. It was Senior Day and the final regular season home appearance for the Maroons’ Class of 2015.

Prior to the match, 10 Chicago fourth-years trotted across the field, flowers in hand, and embraced their parents. The mood was tinged by sadness, as the end of four incredible years of effort and camaraderie drew near. But a palpable sense of triumph existed as well. The fourth-year class has had incredible successes, and its members hoped to add a few more notches to their already crowded belts in the few remaining matches.

However, this torrent of emotion translated to somewhat of a sluggish start. It was the clearly favored No. 3 Brandeis Judges (16–2–0, 4–2–0), who seemed in control of the match, dominating possession and creating opportunities in the final third. But they could never add polish to their attacks, and very few possessions ended with legitimate shots on goal.

The start of the second half brought much of the same, and it seemed like the Judges’ constant attack was about to net success when the ball floated across the face of Chicago’s goal. As the ball sailed on its path undeterred and remained out of the Maroon net, the South Siders were able to relax once more. But it took little time for Brandeis to again threaten Chicago, as minutes later they had another strike narrowly miss the goal. Brandeis ended the match with 13 shots. However, none translated into goals.

Meanwhile, the Chicago offense began to click in the second half. In the 76th minute, third-year midfielder Jorge Bilbao found fourth-year midfielder Nic Lopez, who delivered the ball to an in-stride second-year forward Brenton Desai. With composure, he placed the ball in the bottom left corner, giving Chicago a decisive goal. Ultimately, the match ended in a 1–0 Maroon win.

The result, however, was far more than an average victory. It was a celebration of those who made the year special for so many others.

“This game was all for the seniors,” Desai said. “We have 10 seniors, and every single one of them adds a tremendous amount of value to this team, to the program, and to UChicago as a whole. Each of them is so different in so many aspects, and yet they are a cohesive unit of leadership and confidence. I genuinely feel lucky to have played with them for these two seasons and to be able to score the winning goal in their last home game.”

Desai’s emotion exemplifies the Maroons’ bond and chemistry, a bond that cannot be understated.

“They deserved this win, and they deserve to go to an NCAA tournament and make a statement. We, the underclassmen, will play our hearts out every time we step on the field to extend the season for the seniors as long as possible. They’ve taught us all what it means to put on a UChicago soccer jersey and represent this school,” Desai said.

With this victory, the South Siders overtook Brandeis for first place in the conference.

Next Saturday, Chicago will take on Wash U in the final game of the regular season. If the Maroons win or tie, they’ll win the conference and earn an automatic bid to the NCAA tournament.