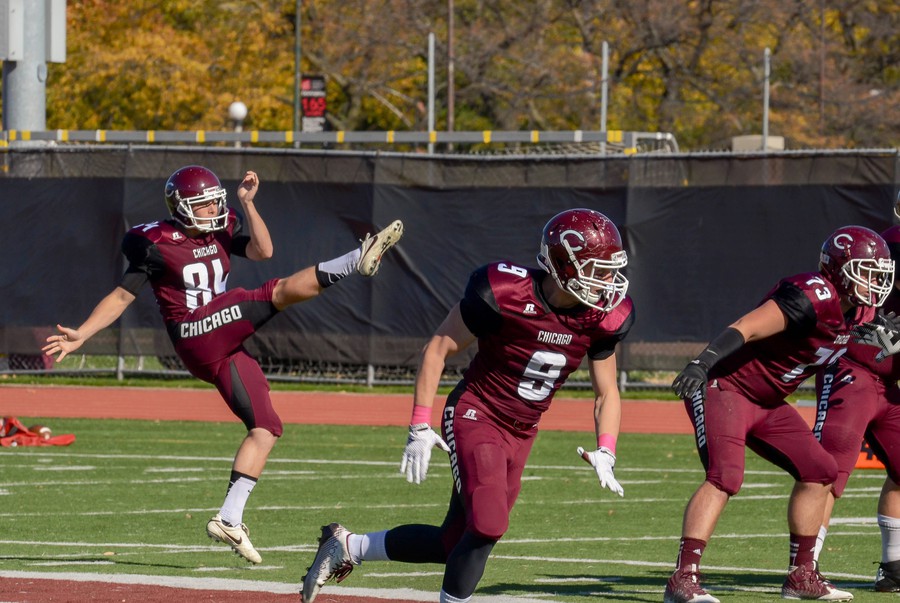 They say all good things must come to an end.

For 12 Chicago fourth-years, Saturday’s UAA showdown against Carnegie Mellon stands as the last time they will suit up on Stagg Field.

“It’s kind of a surreal feeling to think that I am playing my last game at Stagg Field this Saturday,” said fourth-year quarterback Patrick Ryan. “I feel like I was just arriving on campus yesterday. This is one of the last times in our life when we can forget about everything going on with school and job searches and just play the game we love. I’m definitely going to miss having that release.”

In their four years as Maroons, the Class of 2015 boasts six All-UAA selections, six All-UAA Academic team honorees, and eight current starters on the 6–1 Chicago squad. They have led the transition from former head coach Dick Maloney to current head coach Chris Wilkerson, who is 12–5 in his two years at Chicago.

“It’s crazy to think it is our last home game,” said fourth-year defensive end Brandon Bolock. “Our class has been a part of some big changes within the football program, and we have been through a lot of good and a lot of bad.”

Chicago (6–1), which is 1–0 in conference play after defeating Wash U 44–23 two weeks ago, leads the UAA right now while Carnegie (3–5, 0–1 UAA) brings up the rear of the rankings. The Tartans have struggled to piece together a consistent offense so far this season.

“This game definitely brings about a number of emotions,” said fourth-year running back Zak Ross-Nash. “The first one that comes to mind is definitely excited. We’re excited to go out there and show everyone how hard we’ve worked this year and that we’re ready to be one of the prominent teams in DIII football.”

Ross-Nash, who leads the Maroons with eight rushing touchdowns, earned UAA Offensive Player of the Week on October 27th, the same time that third-year cornerback and team captain Vincent Beltrano earned UAA Athlete of the Week. Beltrano knows the implications of these final conference grudge matches.

“While nostalgia creeps in, quite frankly, there is no time to sit back and feel sorry for ourselves, because we are in a great opportunity to accomplish something that hasn’t been done here since before the seniors entered the University of Chicago,” Beltrano said.

The game kicks off at noon on Saturday at Stagg field.