In last chance to prepare for the big one, loss at Augustana 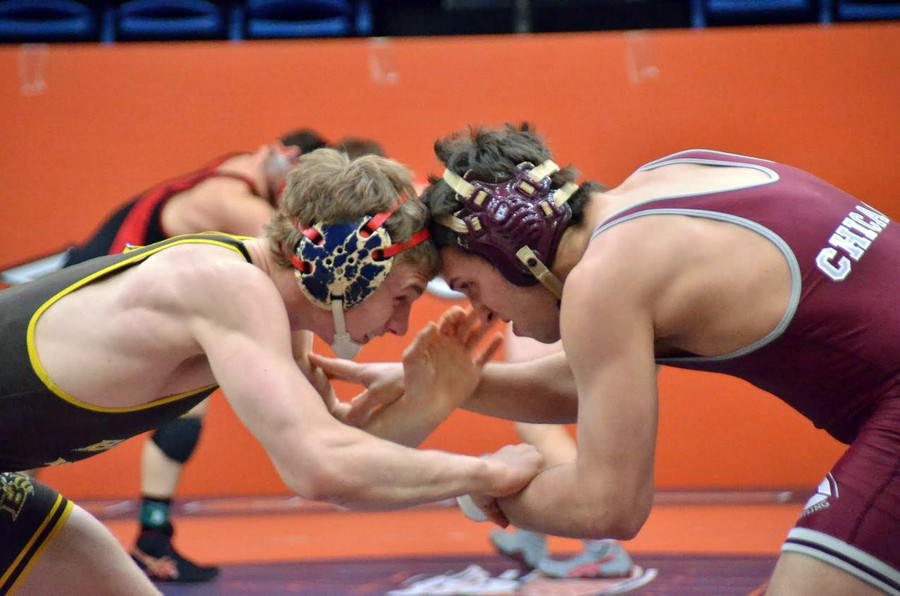 After hoping for a win to send them into the postseason in high spirits, the Maroons fell to No. 26 Augustana College by a score of 41–3 this past Saturday. Chicago’s record fell to 3–9.

Going into the meet, the team had intended for it to serve as an omen for the fast-approaching postseason.

“[The goal was] to battle tough, no matter what the circumstances,” head coach Leo Kocher (M.B.A. ’87) said.

But as the day of the meet arrived, other unstoppable factors made this goal more difficult than intended.

“Augustana is a tough team, and we have some people who would have normally started that are out,” Kocher said. “Both of these facts showed up in the match.”

Even with one forfeit called on behalf of Chicago, there was still one standout: first-year Paul Papoutsis, who brought the squad a 4–3 win at 165 pounds. His win was even more impressive considering the competition he was up against.

“Paul beat a junior who has 20 wins so far this year, and he did it with a takedown in the last five seconds. It was a good effort,” Kocher said.

Papoutsis’s teammates also found the match to be a great morale booster.

“Paul’s match was awesome,” third-year Adam Wyeth said. “He needed a takedown right at the end and gutted one out in the final seconds for the win. That’s always inspiring to see.”

In addition, two other matches were very close, both lost by just two points. Wyeth at 133 pounds lost to Augustana’s Sean McMahon in a 3–1 decision. First-year Charlie Banaszak lost to Augstana’s Isaiah Schaub by a score of 6–4, which was still impressive, considering the circumstances.

“Charlie lost to Auggie’s best wrestler,” Kocher said. “[Schaub is] currently ranked fifth in DIII, [and Banaszak lost] on a takedown in the last 10 seconds.”

However frustrating, the loss did not ruin the first-year’s sprits.

“He did not like the loss, but I am sure he came away thinking he can beat him should they meet in the postseason,” Kocher said.

This outlook on the postseason appears to be felt by many of the Maroons as they prepare for the UAAs this coming Saturday. The team seems to feel that it will use the loss against Augustana to fuel its preparation.

“Just like any competition, we will work hard on our mistakes and try to strengthen what we do well,” Kocher said.

The rest of the squad seems to agree with Kocher.

“[The loss] will only act as a reminder that we need to keep working hard,” Wyeth said. “We all know that our wrestling can come together in a very short period, and we’re hoping to make that happen next weekend.”

The team will continue this preparation throughout the week, hoping to break its streak of placing second at the UAAs and take first.

“Our goal is to defeat NYU and Case Western and become UAA Champions for the 16th time in 27 years,” Kocher said.

The team will be heading into its postseason as it travels to New York City this coming weekend. The UAA Championships will begin on Saturday, February 15.