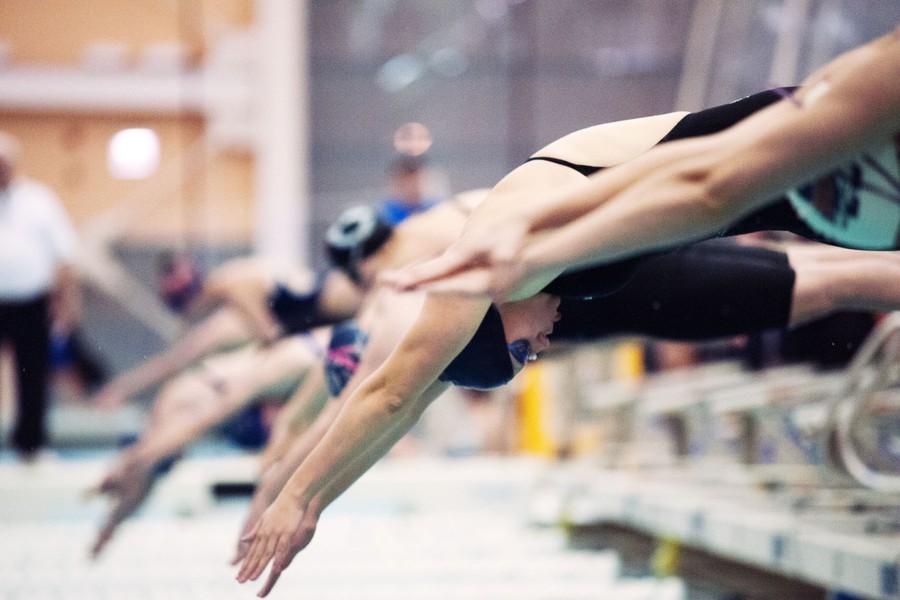 School and pool records were broken left and right this weekend. The Maroons didn’t let the schedule changes hinder their performance at the UAA Championships this past weekend. Inclement weather forced officials to shorten the meet from three days to two days, as well as to divide meet locations. The swim team competed in Cleveland while the divers were at Emory University in Atlanta, GA.

Due to the split in locations, the team scores have yet to be officially released. Chicago, Rochester, and Case competed at a satellite meet hosted by Case, while the remainder of the teams in the UAA competed at Emory. Unofficially, however, the Maroons placed second on the men’s side, and third on the women’s.

“For the men, this was huge because we came closer to the champion, Emory, than we ever have before. Two years ago or even last year it would’ve been unthinkable to beat those guys at conference, and this year we think we came within about 50 points of them,” second-year swimmer Matt Veldman said.

First-year Jonas Fowler also broke the pool and school record in the 400-yard IM at 4:00.93. Veldman broke both records in the 100-yard butterfly prelims (49.05s). Veldman was also part of the top-finishing 200-yard medley relay along with second-years Bryan Bunning, James Taylor, and Meek. The relay team won with a 1:31.02 time. The other men’s relay team was the 400-yard freestyle, which was made up of Veldman, first-years Mantim Lee, Jeremy Estes, and  fourth-year Eric Hallman.

Two women’s relay teams took first, including the 400-yard freestyle and 100-yard medley. The freestyle relay team, which finished with a time of 3:27.17, was made up of third-year captain Jenny Hill, Wall, Erdmann, and Scheidl. The medley team finished in 1:44.71 due to the successful performances by first-year Michelle Law, second-year Jenna Harris, Hill, and Erdmann.

“I feel so lucky and proud to be a part of a team that is truly making UChicago athletics history,” third-year team captain Sofia Gross said. “With 27 school records, 14 pool records, 5 UAA records, and 8 UAA champions, we are an official powerhouse for swimming and diving.”

In total, the Maroons broke four school records. The results of who qualifies for NCAAs will not be revealed for several weeks, so those on the team who received B-cuts do not yet know if they will ultimately qualify. Approximately 22 Maroons are still in training.

“We’ll be getting back in the pool for the next five weeks and training hard to try to make an impact at that meet [NCAAs],” Veldman commented. “Hopefully we’ll be getting excited for next year, when we’ll get to take another shot at unseating Emory from first place.”

The Maroons will host the Midwest Invitational this coming Friday and Saturday, February 21 and 22, where the athletes not selected for the conference team will compete. The meet begins at 6 p.m. on Friday and continues at 11 a.m. on Saturday.