SoChic: Not all that glitters is gold (sometimes it’s sequins)

The results are in: Which Olympic athletes scored gold, silver, and bronze in looking hot and stylish in Sochi this winter? 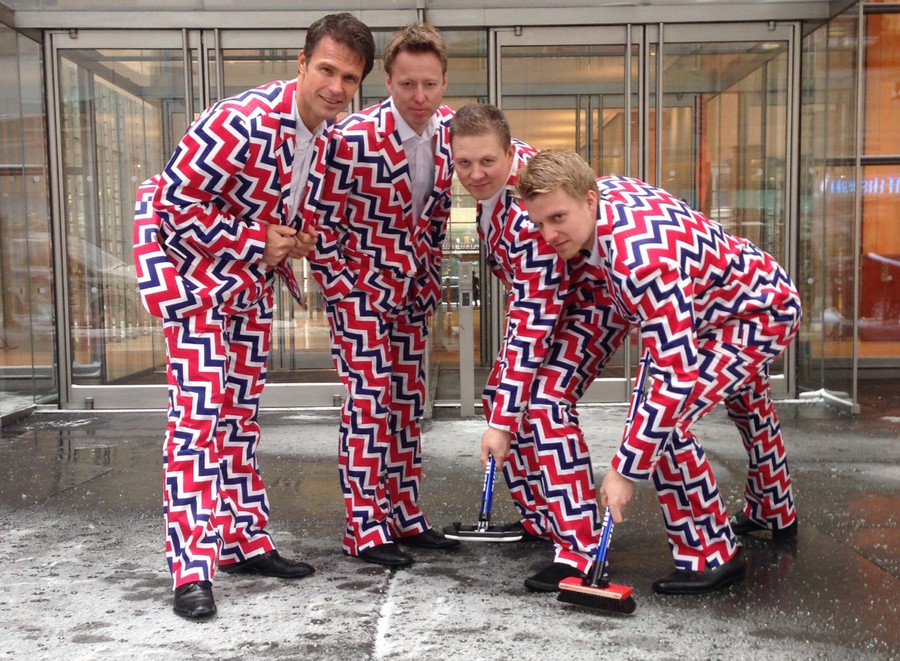 Let’s be honest: Fashion-wise (and content-wise, actually) curling is basically bowling on ice without the sick mustaches. Dress pants, fitted collared shirts, maybe a stylish wrist brace now and again; nothing too over the top.

So when Team Norway unveiled its eye-scorching striped pants for this year’s games, it was really no contest. This isn’t the peaceful nation’s first foray into daring color combinations on the curling pitch—it debuted a pair of deliciously garish red-checkered pants in Vancouver—but it’s truly outdone itself with this year’s showing. Zigzagged with the blue, red, and white of the Nordic nation’s flag, the team’s trousers have taken Sochi, and the world, by storm. Its Facebook page currently has more than 500,000 likes, which makes the team about 10 times more popular than the country of Norway.

And while this daring attempt at razzle-dazzle camouflage fooled no one—the team was knocked out by an underwhelmingly clad Great Britain in the qualifiers—its style and grace need not ever die, since you can buy the pants online via LoudMouth. My pair is currently in transit.

He has participated in six Olympic games. He considered Andy Warhol a close personal friend. He’s released a book of dubious photography and eight pop albums, almost none of which are available on Amazon. He is Prince Hubertus von Hohenlohe, the Most Interesting Man at Sochi. Mexico’s only athlete and the Games’ oldest competitor, the 55-year-old son of German-Spanish royalty who “hasn’t skied in a while” may not have a snowball’s chance in Sochi of making the podium, but his mariachi-style slalom suit makes him the reigning champion of high-speed fashion at this year’s games. Formfitting, patriotic, and possibly racially insensitive, the black suit (designed by Kappa) is complete with a red cummerbund and bow tie, along with intricate silver trim along the shoulders and elbow. I would have liked to see a sombrero to complete the ensemble—wind resistance be damned—but overall I remain highly impressed with von Hohenlohe’s dedication to authenticity and his refusal to treat the Games of the XXII Winter Olympiad like the serious affair that they are. Look out for the elegantly dressed Prince of the Pyrenees as he elegantly glides—or tumbles, as seems more likely—down the course this Saturday.

No single event has affected Olympic fashion quite so much as the discovery of aerodynamics. Did you know that speed skaters used to wear scarves and fedoras? They did. So it’s nice to see that some Olympians are working with what they have to make their aesthetic mark on the sporting world. The skeleton athletes have been an inspiration at this year’s Games, none more so than Team Canada. Grizzly bears, anatomically accurate brains, and baroque skulls have all adorned Canadian helmets this year, but my personal favorite is Sarah Reid’s delightfully macabre Day-of-the-Dead-meets-Maple-Leaf design. Unfortunately the slick head protectors did not help Canada to skeleton gold this year, but they’re more than enough to earn it a spot on the podium of fashion champions.

Say what you will about Germany. And say what you will about ice dancing, too. But put those two together, and you get one of the most singularly ridiculous and awesome displays of Olympic men’s fashion since Ryan Lochte’s infamous stars-and-stripes grill. As the “nerdy professor” to partner Nelli Zhiganshina’s glamorous socialite, the phenomenal Alexander Gazsi positively shined in burgundy velvet corduroys, a classic Grandma’s-attic sweater vest, and understated onyx Coke-bottle glasses. Zhiganshina did what she could in a sequined V-neck tutu-ish number (the back of which looked like the drapery at an expensive hotel), but the ice belonged to Gazsi and his stunning take on public library–chic.