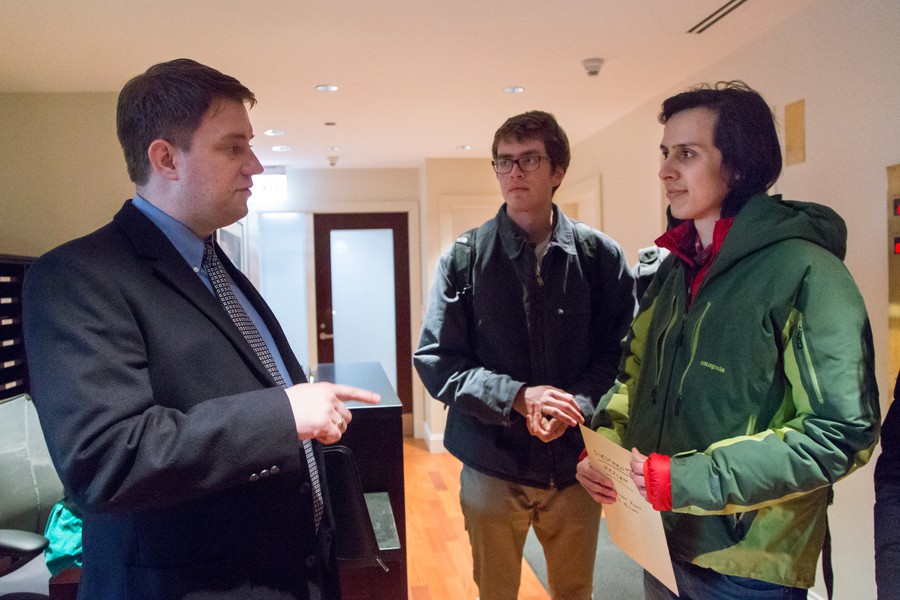 At a rally beforehand attended by approximately 30 students, SFCC released the 58-page report, detailing its case for divestment of the University’s endowment stock in fossil fuel companies.

At a Leadership Conversation event in October, Chief Investment Officer Mark Schmid estimated that the University has three to four percent of its investment portfolio in natural resource companies, specifically those involving coal or other nonrenewable energy sources.

In its report, SFCC urges the University to divest from the top 200 fossil fuel companies, which are ranked based on a function of their coal, oil, and natural gas reserves.

Students gathered in Reynolds Club’s South Lounge at 4 p.m. to read the reports and listen to short speeches, then gathered signs and marched to Zimmer’s office in Levi Hall. Deans-on-Call Robin Graham and Dan Steinhelper met the group and escorted them to Zimmer’s office, where Dean-on-Call Jim Wessel accepted the report and promised to place it on Zimmer’s desk. Zimmer was not present to accept the report.

The rally follows an SG referendum that took place last spring in which 2,183 students—70 percent of those voting—supported University divestment of fossil fuels.

Following the referendum results, Zimmer requested a more concrete argument in favor of fossil fuel divestment at an SG cabinet meeting in May 2013. In response to the request, SFCC, an offshoot of UChicago Climate Action Network (UCAN), began working on the report last summer.

Third-year and Undergraduate Liaison to the Board of Trustees Brendan Leonard notified Zimmer of the upcoming petition delivery at a SG Cabinet meeting last week. SFCC was a factor in Leonard’s decision to run for his SG position.

“I ran last year because I think the last liaison was being ineffective with our campaign, and I think my role is to mediate what SFCC’s concerns are and requests for dialogue are,” he said.

The Fossil Fuel Divestment Report presents scientific, moral, institutional, and financial arguments for divestment. It also argues that the U.S. has a responsibility to lead the world in mitigating climate change and possibilities for reinvestment. Ten students wrote and edited the report, and environmental studies professor Phillip Drake gave feedback on a portion of it.

The group originally planned to release the report during the fall, but was delayed due to UCAN’s focus on fracking that quarter, according to second-year Jonny Behrens, the co-director of UCAN.

UCAN has never produced a report of this kind before, according to first-year SFCC co-coordinator Johnny Guy.