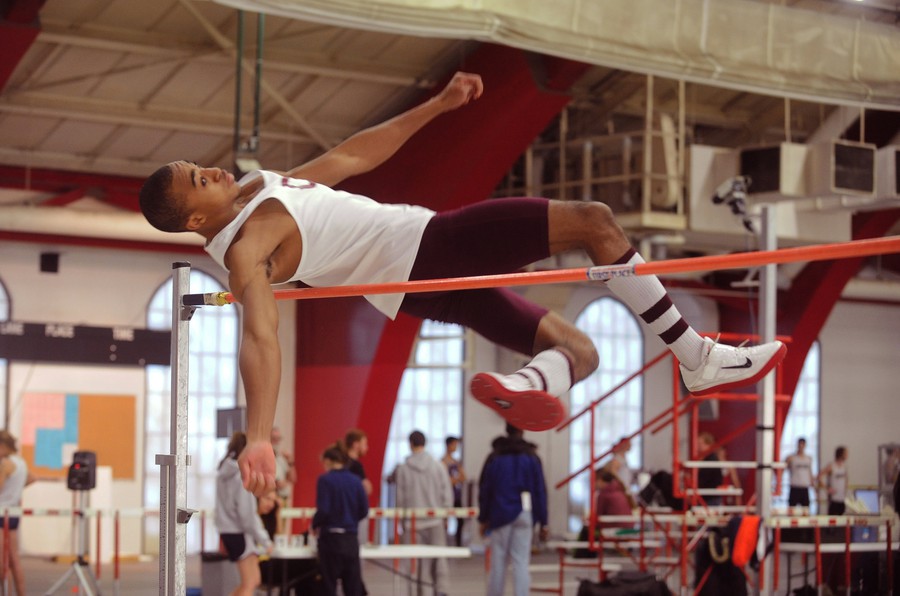 Third-year Semi Ajibola competes in the high jump during a meet last season.

After about a month of traveling throughout the Midwest, Chicago will come home to Henry Crown to host the Windy City Invitational. Twelve teams across all NCAA divisions and numerous club teams are expected to compete.

Chicago’s women will get to see action for the first time in two weeks. Last week’s Whitewater Invitational was split into two days, Friday for men and Saturday for women. The women could not make the trip on Saturday due to weather concerns.

“We were all pretty disappointed that we didn’t get to race at Whitewater,” first-year Michelle Dobbs said. “There were some teams there that are very competitive, and there definitely would have been some great performances as we fed off the talent on other teams.”

Dobbs is a middle-distance runner for the Maroons whose primary event is the 800-meter run. As a first year, Dobbs has led the Maroons in both the 800-meter and the mile with her times of 2:20.73 and 5:16.23, respectively.

“I have some high goals [in the 800],” Dobbs said. “I am hoping to run a time good enough to qualify for the national meet over the course of the indoor season. The race this weekend may not be the time when I’m going to run the time I need to qualify, but I think this race will be an important step along the way, and I’m hoping to cut five or six seconds off of my Phoenix Invitational time.”

If the season ended today, the qualifying time for nationals in the 800-meter would hover around 2:17.

The Maroons will once again be racing against themselves this weekend, as the majority of the teams competing do not have particularly strong rosters. Expect there to be a few solid competitors on each team, but nothing like last week where almost every event included athletes who are among the top 10 in the nation.

“This weekend, there probably won’t be quite as much competition from the schools that are coming, but I think the competitive attitude we had going into last weekend will definitely carry over, and we’ll see some great races this Saturday, as well,” Dobbs said.

The result of the meet does not have much significance for the Maroons’ season. The meet is merely preparation for conference and nationals later this season. The UAA championship, however, is rapidly approaching.

“This meet is another chance for us to go get in some solid performances before some of the larger meets start coming our way,” Dobbs said. “The indoor season is not extremely long, so I think at this part of the year we need to start approaching the elite marks that we’re capable of. I think we’re all looking to establish some consistency in our performances to be able to see where we stand before going into some very competitive meets.”

The men have 10 athletes ranked in the top five in their respective events in the UAA, and the women have 17. Look for these 27 athletes to start approaching their best times over the next couple of weeks. There are numerous others on both squads who are on the verge of entering scoring positions in the UAA, and they too will try to improve their times.

The meet this weekend, the Maroons’ second-to-last home meet, will start at 11:30 a.m. on Saturday and continue through about 5:30 p.m.