In Kent lecture, Brazile tells of struggle in black politics

Brazile said that the problems facing the black community today are the same as those faced 50 years ago. 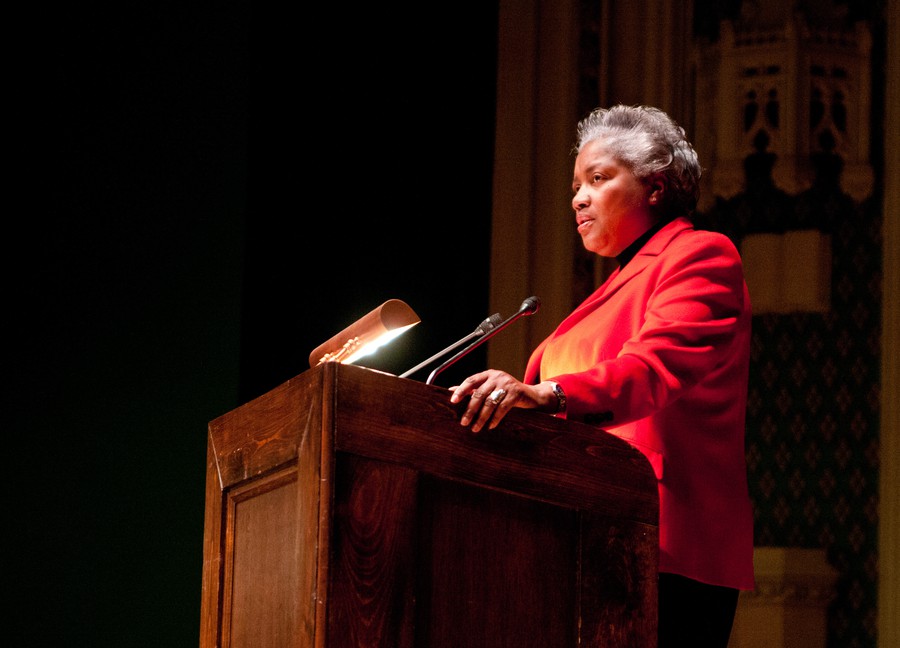 Drawing on her Christian faith, Louisiana heritage, and tenacity on television, Donna Brazile shared her thoughts on topics. ranging from equal pay for women to black Republicans as part of the 2014 George E. Kent Lecture in Mandel Hall on Thursday night.

Brazile, a Democratic political strategist and the campaign manager of Al Gore’s 2000 presidential bid, was invited by the Organization of Black Students to give the prestigious lecture in honor of George E. Kent, one of the earliest tenured African-American professors at the University of Chicago. Brazile focused on the current state of black politics in the United States and the changes that have taken place since the March on Washington 50 years ago. She also touched on several of today’s politically vibrant issues.

After tracing the history of Black History Month, Brazile shared some of her background with the audience. She spoke of one of her first brushes with racial defiance. At Brazile’s elementary school, black students were made to stand without shelter while waiting for the bus, unlike the white students, who had a shelter. Brazile organized her fellow black classmates to promote racial integration, telling them to stand underneath the shelter. “I wasn’t suspended, but I sure got into trouble,” she said. “I have a history of being a bad girl.”

Brazile’s speech focused on core problems for the black community, which she said are the same as those that the community faced 50 years ago.

“We have to be twice as good to get twice as far. That is not a legacy, not a permanent condition. It’s an entry card, the dues we pay to belong here in society,” she said, explaining that the dues reach back to when Africans first arrived in the Americas. “We have been given a bad check, Dr. King said, marked with insufficient funds. Like Dr. King, I believe the bank of justice is bankrupt. There are more than sufficient funds in America’s great vault of opportunity.”

Brazile also addressed claims that people in poverty are lazy and that black men are failing as fathers, describing how her dad worked two jobs, earned four Bronze Stars in the Korean War, and “never abandoned his babies.”

“Is that a diagnosis for what’s gone wrong in the black community? Is it more a diagnosis for the black community than the white community or Hispanic community?” she asked. “I’m not a doctor, but it seems that…we’ve trimmed the branches, healed some of the blight of the tree of liberty, but the roots remain infested with bigotry, intolerance, and a very small and ruthless minority insistent on getting their way.”

Brazile touched on the issue of equal voting rights, a lightning rod for her as the vice chair of voter registration and participation at the Democratic National Committee. “That was the goal 50 years ago, and it’s still the problem,” she said.  “If you try to stop people from voting because you’re afraid of how they’ll vote, you’ve not only failed the test of history, but you’ve failed the test God gives us.”