The future of jazz comes to Logan with Akinmusire 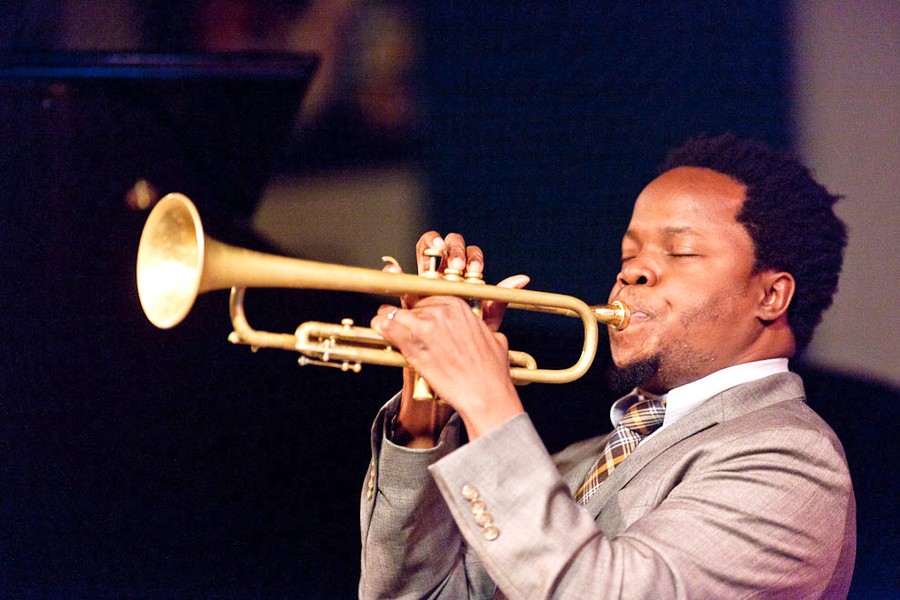 Ambrose Akinmusire and the four musicians who with him made up Friday evening’s quintet at the Logan Center are well known by contemporary jazz enthusiasts. His favorable reception and the glowing reviews of his work (Nate Chinen of The New York Times named Akinmusire’s 2011 release his album of the year) tell of the early stardom and genius of this young man in a scene that has tended to favor bright, creative, to-be-legendary youth. Is this the new face of jazz?  Like everybody else who doesn’t have an ear for the avant-garde in jazz music, I know the old trumpeters—those of a storied, legendary jazz. I listened to Sketches of Spain four or five times during my travels across the Iberian land for a week, with Cervantes’s windmills spinning themselves through the desert sun.

Akinmusire is 31, though, and hails from California. He’s a prophet of the post-bop era whose language tends toward the atmospheric. His 2011 album When the Heart Emerges Glistening was his first on jazz label Blue Note and was released to critical and popular applause. Following the quintet’s show at Logan Art Center, I talked with the audience member sitting beside me and we both felt a respect-tinged obligation to listen in greater depth to the young trumpeter’s work. We agreed that any audience member ought to be desirous of more of this sound, a sound that was familiar and yet distinctly the voice of a new thing being shaped. I tell you this so that you may know the strange affection we felt for this music that was familiar and so comforting, new and so enlightening in the darkened performance hall.

During the show, the stage held the five musicians enraptured before the face of the audience. It was a beautiful thing to watch each one in their own cool but impassioned aura. The trumpet spoke a slow language of love, loss, and love come again. The saxophonist played with a mellow liveliness that sunk into and emerged out of the thick undertow of piano, drums, and upright bass, falling in and out of a tenuous relationship with its fellow instruments, playing hide-and-seek with Ambrose’s trumpet.

Seven distinct pieces swelled in the air before the encore. The seventh, titled “Bubbles,” as well as the bulk of the compositions that night, came from Akinmusire’s upcoming album the imagined savior is far easier to paint. Akinmusire in his sparse, spare, cool words told us he wrote the song “for John Bubbles, from Buck and Bubbles, so please check him out, he’s a great tap dancer.” The composition moved as you would imagine John Bubbles would before you, an old time vaudeville circus swelling as everyone played their own parts crazily without jumping ship from the harmony. Most of the compositions, however, placed notes of a drifting longing against the eardrums in the room.

Aside from Akinmusire, the quintet featured saxophonist Walter Smith III, pianist Sam Harris, bassist Harish Raghavan, and drummer Justin Brown, all of whom returned for a two-piece encore. The first was a winding, whinnying meander of a trumpet cry atop a steady piano that crashed like a spring thunderstorm, called “Marie Christie.” The final was a saxophone and trumpet duet with lingering notes that trailed off to a standing ovation.