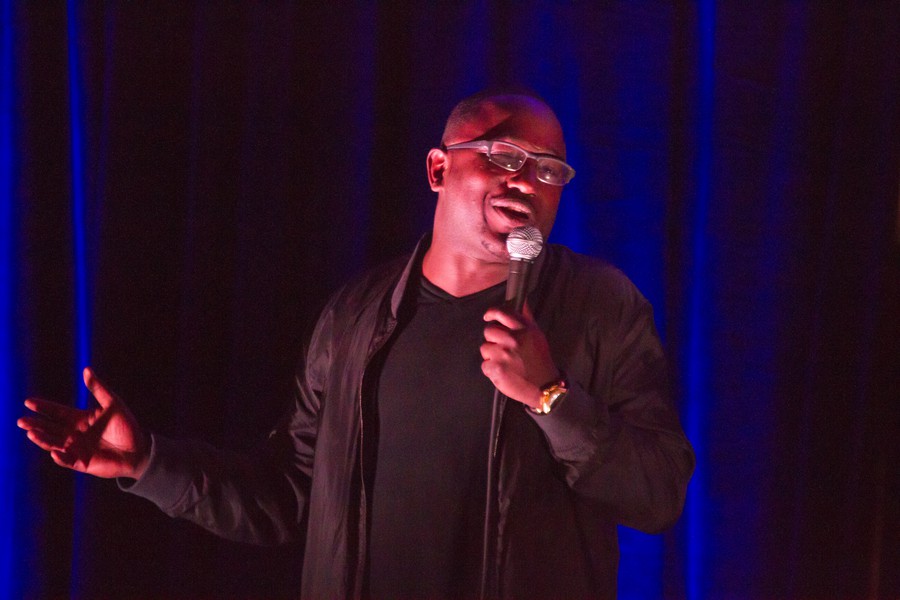 Last Saturday, the Major Activities Board (MAB) revived its Winter Comedy Show after a one-year hiatus, prompting students to wonder why they had stopped in the first place. Are we really that humorless of a campus? Do Foucault and fart jokes really have to be mutually exclusive? After taking a break in 2013 due to funding issues, MAB banked on Chicago-born comedian Hannibal Buress to bring back the laughs. Or at least the jokes.

To enter the hallowed sanctum of the Club of Cloisters, students first offered up their wrists for blue and red wristbands, one allowing entry to the (comedy?) Club and the other allowing entrance to the hopping northwest corner of the room, which provided the liquid entertainment for the evening. The room, used throughout the quarter for contra dancing, swing dancing, LARPing, and other similar pursuits, was now decked out to feel like an intimate comedy club, complete with dim lighting, stage, and rows of folding chairs. Onstage a DJ laid down spaced-out beats and synth loops with strains of Chance the Rapper, Drake, and Kendrick Lamar bubbling sporadically to the surface.

Buress, who has written for 30 Rock and Saturday Night Live, as well as performed on many late-night shows including The Late Show with David Letterman and Late Night with Jimmy Fallon, is no stranger to an intelligent audience. The real burden lay on the sleep-deprived, frostbitten, humorless eighth-week zombies who constitute the student body this deep into winter. Do they still remember how to laugh?

The first opener, Dan Brier, a fourth-year member of student improv comedy group Occam’s Razor, provided a glimmer of hope with a few topical jokes touching on Durkheim, the darker side of internships, and awkward conversations with French professors. Brier’s nerdy shtick gave many in the room a strange sensation, almost like uncontrollable, spontaneous sneezing mixed with a nasal-y yodel: the first hints of laughter.

Next on stage, Chicago rapper Calez tried to get the crowd on its feet and dancing, but rows of sharp metal folding chairs and scores of barked shins kept things from getting too rowdy. Calez suffered from the  choice of venue, and a sadly large portion of the audience sat down during his set. Yet, though he failed to get any laughs, he gave a much-needed energy boost to the first few rows, who, after a few minutes of dancing, clapping, and yelling, seemed in peak physical condition to release deep belly laughs.

Buress finally clambered onto the stage to cheers and instantly had the crowd (or at least the more amenable first few rows) in his hands. Feeling out the room with jokes about sex, weed, and plane delays, he also threw an offhand quip about Adderall, which elicited an unexpected guffaw. Buress took note and harped for a bit on other UChicago stereotypes (mainly the rich, white ones) and, when his DJ used a gunshot sound effect, added, “You’re safe; this is Hyde Park!”

He spent the rest of the evening toeing the line between alienating and buddying up to the crowd, always getting at least a few chortles. After outlining an experiment he conducted on the “infinite” water supply in his New York apartment by leaving the tap running for nine hours (noting he only needed about two percent of infinity, and could send the rest of it to places in the world where clean water is a scarcity), he won a few laughs from the environmentally conscious by adding that to make up for the water he wasted, he decided to piss in the sink for three months. “If you truly care about the environment, you should piss in your sink,” he quipped, adding that, on top of saving water, it also makes you feel like a king.

By the end of the night, Buress’s act wove in longer narratives and hilarious stories about pissing his pants on ecstasy, staying out late for bad reasons (“I don’t want to go home; it’s messy there”), and how racism hurt his back. And, for the rest of the crowd who’d been too busy reading Derrida to notice he was up onstage, he provided an explosively entertaining deconstruction of rap songs by 2 Chainz, Eminem, Young Jeezy, and of Big Sean’s infamous “ass” verse from Kanye West’s “Mercy.”

MAB served up a night of raucous, rib-splitting comedy Chicago style: with lots of hot, saucy layers, and beer on the side. Buress made sure that even the coldest humorless academic got a chance to laugh. Most of the audience members took it.