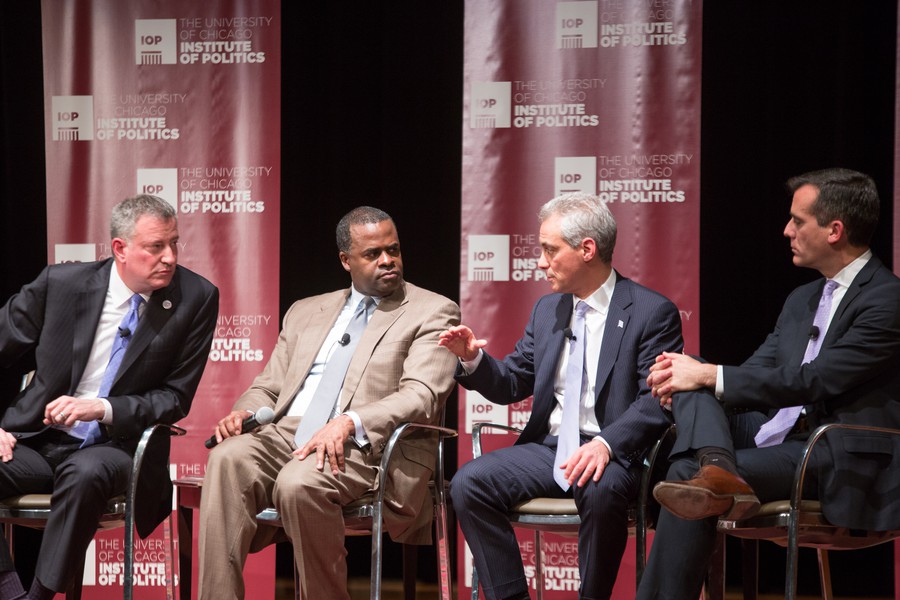 In a talk that spanned a range of topics, including the Polar Plunge, charter schools, and predicting future elections, the mayors of four of the United States’s biggest cities spoke about the challenges they face and the role of teamwork in overcoming those challenges, in what was called an “unprecedented” event.

The evening began on a good-humored note when Garcetti ribbed Chicago for its weather. “I’m not sure what all that white stuff outside is. I put my hand in it, and it hurts,” he said.

This camaraderie and sense of teamwork continued throughout the discussion, with the mayors often praising each other’s efforts in their cities. De Blasio often clapped Reed on the shoulder, and Emanuel frequently went for highfives and fist bumps from the others after making a joke.

Reed, who was a state legislator before becoming Atlanta’s mayor in 2010, described one of his first experiences in public office. When he went up to the podium to speak during a session of the State House, the Speaker told him that it should be a year before he, as a new representative, should speak during the session. “I thought that I had been elected, [but] he took my parking space, and he moved it so far away,” Reed said.

“And you didn’t speak for a year,” Emanuel joked.

“Yeah, because of that walk!” Reed exclaimed.

The mayors all agreed that one of the largest issues they were facing was a lack of support from state and federal governments.

“We know there is not a cavalry coming right now from Washington,” de Blasio said.

De Blasio contended that it would be more efficient for the federal government to send money directly to cities as opposed to states, and Reed agreed.

“The federal government is functioning on an outdated model that shifts the money to 50 states as opposed to shifting resources by GDP,” Reed said. “If the federal government wanted to boost productivity in American cities, they would change the formula…because [cities] get it to where it is needed faster and more efficiently.”

Emanuel, who has worked in two presidential administrations and as a U.S. congressman before his election to the mayor’s office, said, “Washington is AWOL. The state capitals have their own problems. We are cast on our own in a time when we need to boost the economy.”

To confront these issues, the mayors spoke of the importance of working together among mayors and among citizens to move forward and revitalize the country through its metropolitan areas.

“If you put together the most pro-charter, conservative school reformer with the most active, union, hard-core activist and get them for a moment to say, ‘What does a good school look like?’ they’ll have an identical conversation,” Garcetti said. “We are losing all of our time, saying, ‘Are you pro-charter, anti-charter? For teachers’ unions or against teachers’ unions?’”

For the New York City Mayor, these debates go beyond their local contexts.

“The future of this country lives and dies by its cities,” de Blasio said. “We have to have a changed dynamic, and that has to begin with all of us.”