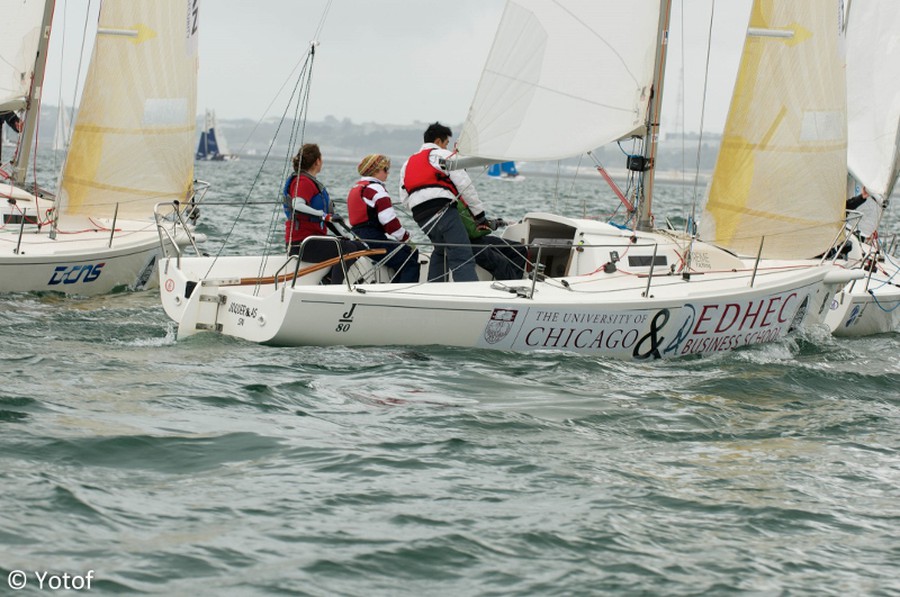 Courtesy of Courtsey of Thomas Gazeau

There’s a certain magic in sailing. “In civilizations without boats, dreams dry up,” says the front page of the University of Chicago sailing club, quoting Michel Foucault.

But that doesn’t make it any easier on sailors’ brains or bodies. On Lake Michigan, the University of Chicago sailing club has to adjust to swirling, unpredictable winds and near-freezing temperatures.

“You can get blown over by the wind or have no wind, but when it’s just right, sailing is very cool,” said second-year club treasurer Connor Lynch. “There’s a very intellectual aspect in terms of sail theory and the physics behind it.”

Sailing clubs have existed in some form or another at the University since its outset: pictures of undergraduates on Lake Michigan are scattered throughout the University’s photo archive. Twelve years ago, though, the club was disbanded after a team from a visiting school sailed one of the club’s boats while inebriated; the Maroons are still not allowed to host regattas, said third-year club captain Katy Carlyle.

This iteration of the club is on the rise, though, with about a dozen committed, experienced members and several more picking up the sport. The sailing club runs a quarterly Learn to Sail lesson, where it teaches newbies everything they need to know about getting started on the water. It’s also starting to fundraise for new, faster boats, and is soon leaving for its second annual trip to compete in the Course Croisière EDHEC in France.

Members come to the club from different backgrounds, majors, and experience levels, said Carlyle, who had raced boats in high school and came to Chicago looking for a club to join.

The club runs practices three times a week at the Jackson Park Yacht Club. “I drive the big 16-seater sports van down to the Reg and pick everybody up,” Carlyle said. “We rig up our boats, which takes a while; sometimes we’re hunting for parts or looking to repair our boats. Then we run drills out on the water, do practice races, and come in as the sun sets.”

The club also travels to the other member schools of the Midwest Collegiate Sailing Association to compete at regattas, in which fleets ranging from several to hundreds of boats run two races, each with an upwind and downwind component. The team with the lowest average placing wins. The Maroons usually finish mid-fleet, according to Carlyle.

Boats are operated by two-man teams: The skipper mans the helm and steers the larger main sail, while the crew person turns a smaller sail and adjusts the angle of his or her body to balance the weight in the boat. Boats can’t go directly upwind, so the skipper and crew have to figure out the best possible angles to zigzag toward their target.

“It’s tradition for hosting schools to put on a party,” Lynch said. “You get to interact with all the other teams and the athletes.”

That sense of tradition extends to the water, too.

“Sailing’s very much in the same way as golf,” Lynch said. “It’s a gentleman’s sport in that there’s an enforceable set of rules that nobody wants to enforce because it takes a long time, so it’s based on the honor system.”

In the past two weeks the club competed at the Wet Your Willie regatta in Northwestern, then the Hoosier Daddy regatta at Indiana University. The focus of its spring season, though, is its weeklong trip to France.

“I tell everybody it was the best week of my life,” Carlyle said of the team’s trip last year. “It’s five solid days of just sailing out in the ocean; there are so many interesting people from all around the world. We were very good friends with the Scots; hopefully they’ll be back.”

Carlyle’s crew will certainly bring the passion, hard work, and appreciation for the sport that makes the sailing club special.