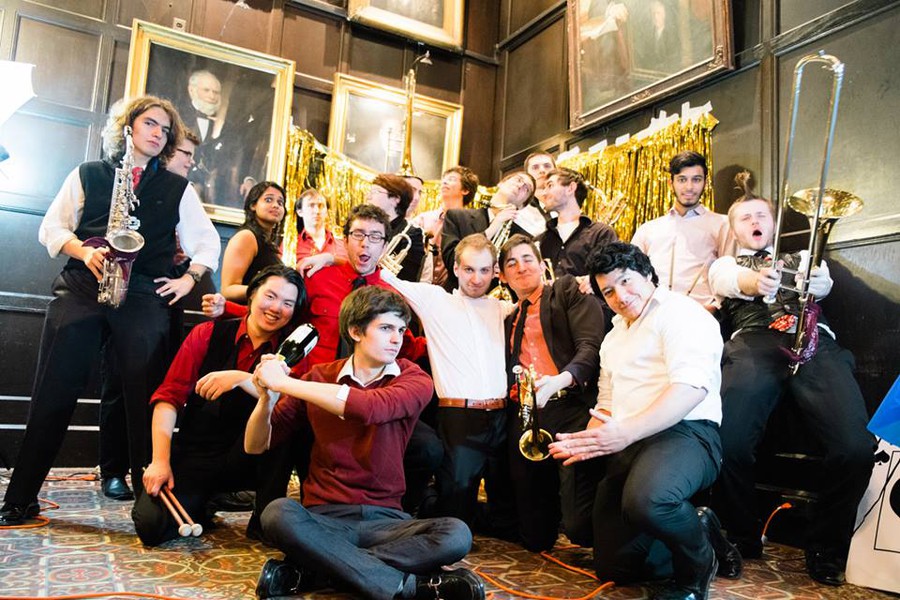 It’s true: Since its inception last year, Dirt Red has played at events and get-togethers of all sorts from Hyde Park to the North Side. You may have heard the band’s dulcet tones at various campus events, or at one of their much-discussed apartment ragers. But now this New Orleans–style brass band can finally say it has actually played in New Orleans. Over spring break, 15 of the band’s members traveled to the home of many of their musical inspirations to serenade the Crescent City with their own take on its trademark sound.

The idea for the trip started with what a few of the officers call a casual, almost joking suggestion. At first it sounded far-fetched, but with help from the Student Government Finance Committee, the Dean’s Fund for Student Life, and fundraising of their own they got the chance to make their way to the Big Easy.

“[Ivan] brought it up, and we all just half-jokingly were like, ‘Oh, yeah, one day we will make like a bazillion dollars, and all of us can go to New Orleans,’” said third-year Special Projects Coordinator and vocalist Himabindu Poroori. “At the end of last year, we decided to become an RSO to hold auditions, keep the institution running even after we left. People were like, ‘You’re a band, that’s weird’ but then they [ORCSA] were like, ‘That’s fine’ and they let us became an RSO. Then the idea of possibly going to New Orleans became so much more real.”

Despite having RSO status, the band remains pretty flexible, which seemed to mesh nicely with the culture in New Orleans. Having no plans for gigs prior to their arrival, Dirt Red played on street corners to crowds of 40 to 50 people at all times of the day.

“Most of the days, we were just playing on the street,” current Musical Director, violin player, and third-year Kevin Schwarzwald said. “That’s one of the greatest things we saw in New Orleans. It’s a place where you can just go grab your band and find a street corner, and people appreciate you just playing there.”

With plans to rehearse every day and play wherever they could, the band stumbled onto an opportunity to play at New Orleans’s House of Blues. While playing in Jackson Square, a guy, properly outfitted with a beret, approached Schwarzwald and invited Dirt Red to play at an event that night. Third-year Anna Tam, a current officer and euphonium player, said there was a fear that they would be tourists playing to a bunch of tourists, so this nod of recognition from an individual entrenched in the local scene was great. The trip’s spontaneity and turn of good luck didn’t stop there, either.

“The coolest night we had, one professional brass band contacted, and they said they were playing the after-party of one of the concerts we were going to for the Dirty Dozen Brass Band, which is one of the people we respect a lot,” Schwarzwald said. “They are the name in brass band music in New Orleans at this time. They told us we were welcome to play in the second line with them, which is the New Orleans tradition of marching down the street with grass music going. We met up with this band Pocket Aces and played with them on the way to the official after-party and, from what they heard of us play marching down there, they invited us up to play the last half-hour of the biggest brass band concert for the month in New Orleans.”

For the group, the trip was a sort of revival of their origins in traditional New Orleans brass music. While staying true to this tradition, Dirt Red’s repertoire has been influenced by funk, soul, R&B, and early jazz. One of their favorites to perform is actually “Crazy in Love” by Beyoncé, not exactly a brass-band standard. Poroori called the band a 20-year-old’s idea of a New Orleans band.

“We play some Top 40, and stuff from all over the place,” she said. “But that’s one of the things about the trip: It reminded us that one of the things we love to play the most is the New Orleans standards because they are simple, they loop, you can do whatever you want with them, you can jump up and down, you can march, and all of those songs are designed to be fun. We rediscovered how much fun those standards are.”

Now back in Chicago, there are plans for an outdoor, end-of-year concert, an open jam session, and other shows to help Dirt become an even greater part of the music scene on campus. The group holds annual fall auditions, and this year Dirt Red welcomed five new members into a group of already distinct and mixed personalities.

Poroori told a story of the band’s “casual collaboration” at one rehearsal. “No one in the band plays piano, but there is a piano in our rehearsal room. Someone will go and sit down and start plinking something out, and someone else joins in, then someone else joins in and, before we know it, we are playing CeeLo Green or Duffy. We’ve come up with so much stuff just being in the same rehearsal room. We’ve written songs like that too.”

And, cheesy though it may sound, the consensus seems to be that the music is really what brings them all together.

“[In New Orleans] we had rehearsal every morning for two hours to work on our sound,” Tam said. “There was this time we split up into groups, and we just made our own songs. We just created a song in like 20 minutes. That’s what we’re all about: Making music.”