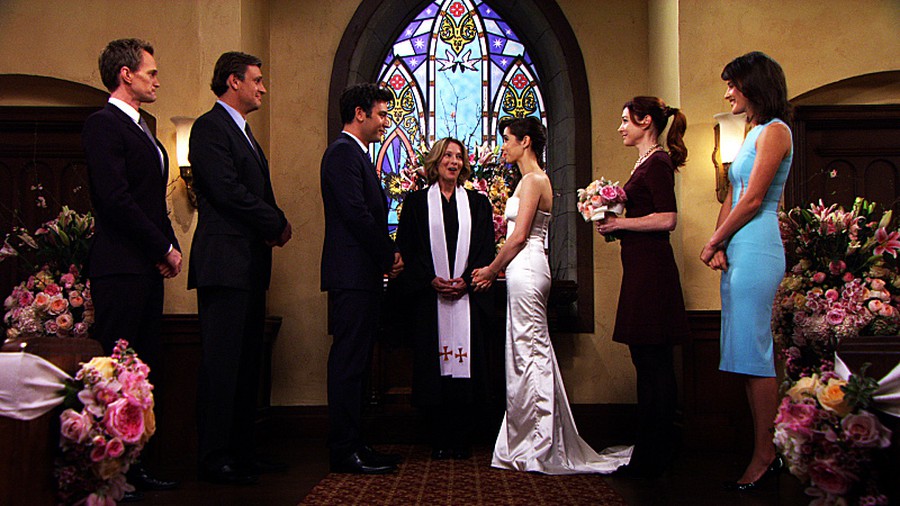 Some people devote nine years of their life toward graduate school, working up the corporate ladder, or raising kids. The past nine of my life were spent avidly watching How I Met Your Mother. And these past nine years of sitting at that booth at MacClaren’s just culminated Monday night in a hurricane of old age, mourning, and reality checks.

After nine seasons, 208 episodes, an actual Bro Code and Playbook, and 29 women who weren’t the mother, How I Met Your Mother came to its finale, showing what lies in store for each main character leading up to and after the year 2030. The audience, at one point numbering over 12 million viewers, remained consistent and probably more faithful than most of Ted’s girlfriends. With 28 Emmy nominations, there is no doubt as to how much the show was loved. It was this final episode that was supposed to provide nine years of closure to a story beginning in 2005, although I’m not sure who needed it more—Ted’s kids, or the audience.

Let’s first put aside Ted’s relationship with the mother, who finally has a name (Tracy), a disposition (sweet), and a personality (just as corny as Ted’s). There were so many other wrap-ups and character transformations crammed into the hour-long episode that it was hard to wrap my head around it. The episode’s huge shocker was Barney’s finally falling in love—not with some barroom floozy, but with his own newborn daughter. Still, there was something distinctly uncomfortable about not knowing how he met the mother, or who she even was. While the moment in the hospital was tender, I wish I could have seen more of their dynamic. Robin, meanwhile, completely withdrew her presence from the gang, and left me wondering whether it was because of the divorce or her love for Ted. If I had seen more of her character, maybe I would have thought more about her decisions rather than her increasingly drastic hairstyles.

Marshall and Lily seemed to be the only main characters that remained pretty static, the only difference being one more pregnancy. For me, the most heartbreaking change was when Marshall and Lily waved a final good-bye to their old apartment. When Ted moved out, that was a change that I accepted, and even the year Marshall and Lily spent in Italy was fine—but losing the apartment altogether really proved the fact that the characters were moving on, for real this time.

Now to the heart of the episode, and series: Ted’s epic narrative of how he met his children’s mother. When we meet her briefly, she’s lovely and perfect, but she doesn’t stay for long. Something in the past few episodes gave everyone an uneasy feeling that Ted might be telling this story to his kids because their mother is now dead. What follows in the finale fulfills everyone’s sorrowful prophecy. I kept repeating to myself that it couldn’t just end like this. Craig Thomas and Carter Bays, the show’s creators and executive producers, wouldn’t make it depressing. They couldn’t. Not after all Ted had gone through…not after all we’d gone through. But we see Tracy sick in the hospital, and our worst fears are confirmed.

What follows this revelation is the jaw-dropping moment of reconciliation, but maybe we knew it was coming. Ted’s kids spell it out for us: Robin was there all along. While the writers in no way try to diminish Ted’s love for the mother, she is now no longer a part of the story, and was never the main point. The story had always been about Ted and Robin.

In some ways, I resisted this ending, out of shock and overstimulation from all the loose ends suddenly coming together (except, of course, “The Pineapple Incident”). While the lead-up for the past nine years has been all about how Ted meets his kids’ mother, I was left disappointed in these final scenes—when Ted finally meets the long-awaited mother, she is short-lived, and Robin’s reentry comes too quickly to process.

Still, this finale seemed to be the only way for Ted’s adventure to pan out, no matter how bittersweet. You might be crying out in shock and criticism, or you might be crying tears of joy over this inevitable rekindling of Ted and Robin. No matter what you thought of the finale, it’s hard not to shed a tear as the credits roll: Ted’s long and involved story of how he met the mother has finally come to an end.