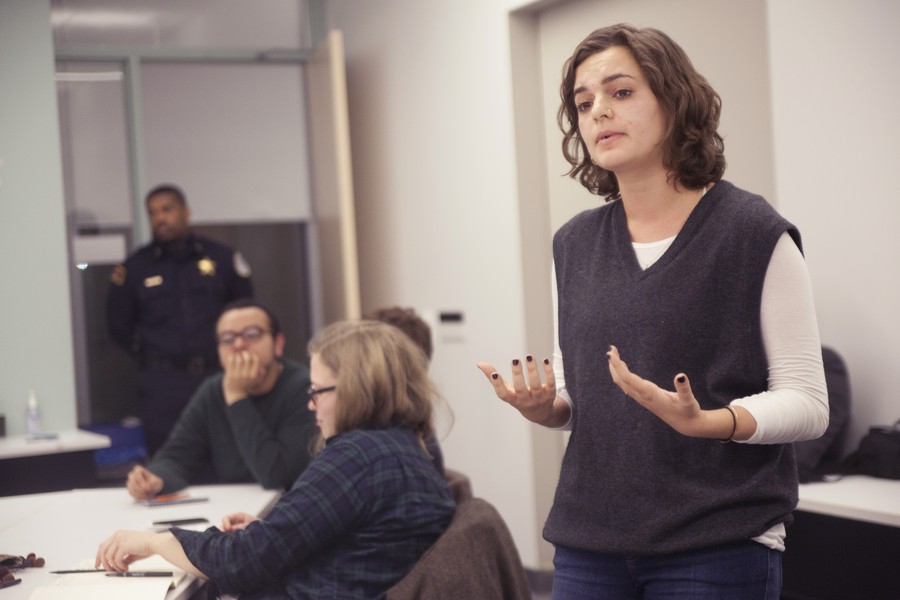 The University of Chicago Police Department (UCPD) held an open forum as a part of its efforts to attain accreditation from the Commission on Accreditation for Law Enforcement Agencies, Inc. (CALEA) on Wednesday. The student group Coalition for Equitable Policing (CEP) dominated the forum, which 30–40 people attended, representing the majority of speakers and expressing its dissatisfaction with the UCPD.

The CALEA, the self-described “gold standard in public safety,” is an independent accrediting authority established by law enforcement agencies that certifies all varieties of police departments. The CALEA’s accreditation is based on evaluating an agency according to its 482 standards, which address all aspects of the police department.

The UCPD is in the final stages of the process of CALEA certification, according to Assistant Chief of Police Gloria Graham. After enrolling in the process about a year ago, the UCPD reviewed CALEA standards and conducted a self-assessment. The open forum is a part of the CALEA’s on-site assessment, in which assessors, who are also members of law enforcement, visit the police department under review. The on-site assessment culminates in a report that is passed to the Commission’s Agency Review Committee, which decides whether the department receives CALEA certification.

Graham said that CALEA certification benefits the community more than the UCPD itself.

“It’s basically a certification that your police department in your community is meeting industry standards… that we’re looking at what nationally are the things that have been tried and proven to be true, and we’ve adopted those things,” she said.

CEP members contended that the UCPD did not publicize the hearing adequately in an attempt to avoid student and community input. An announcement of the forum was posted on the UChicago News website on March 20.

The CALEA’s standards are copyrighted and not available on its website, so members of the CEP went to UCPD headquarters in order to read and analyze the standards, according to Aerik Francis, fourth-year CEP member.

“We found out about this knowledge rather late, and we only had a couple of days to work with. Even getting access to [the standards] was a task in and of itself and difficult, so we literally had to hand-copy standards we thought were applicable to our cause and our demands,” he said.

Graham stated that the UCPD acted in compliance with CALEA’s requirements for the open forum, which was scheduled by CALEA and not the UCPD.

“If I give you a week, two weeks in advance of when something is, either you can attend it or you can’t attend it. Some peoples’ schedules are never going to work, and that’s just the reality of any kind of meeting,” she said.

She also noted that CALEA took e-mails, letters, and phone calls from community members in addition to the open forum.

About half of the speakers spoke of personal encounters with the UCPD. Complaints ranged from instances of racial profiling to unprofessionalism in reporting sexual assault to a general lack of respect for the Hyde Park community.

According to CALEA Head Assessor William Buckbee, it’s “hard to benchmark” the relative size of the UCPD’s open forum in comparison to previous ones he’s assessed in his 12 years with CALEA due to the diversity of police departments CALEA assesses.

“If there are no issues people tend not to come out,” he said.