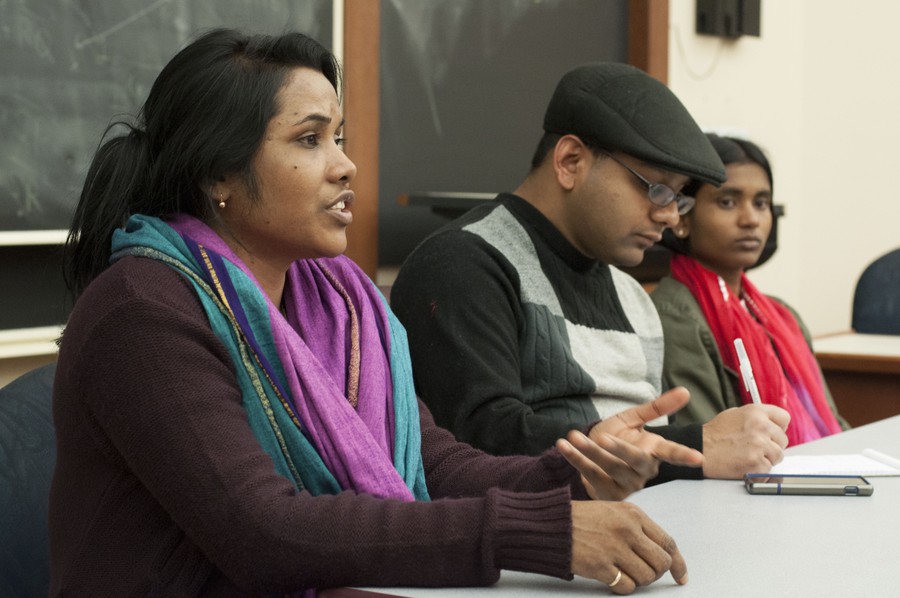 On Monday Aleya Akter, a Bangladeshi labor organizer, and Aklima Khanam, a survivor of the collapse at the Rana Plaza factory in Bangladesh, spoke about their experiences in an event hosted by Students Organizing United with Labor (SOUL). The event aimed to raise awareness about the Bangladesh Accord on Fire and Building Safety and the University’s role in purchasing from companies that have not signed the accord.

Rana Plaza, an eight-story commercial building, collapsed in Savar, Bangladesh on April 24 of last year. It was the deadliest garment-factory accident in history, with a death toll of 1,129. On the day of the collapse, Rana Plaza workers were ordered to go to work under threat of being fired, despite rumors that the factory was crumbling. Within an hour, the building began to shake, and a machine fell onto Khanam, who had been working at the factory since January 2013. She was found 12hours later and is still unable to work, but she has not received compensation.

“Do the students want us to die in fires or building collapses, or do they stand with the workers of Rana Plaza?” Khanam asked the audience.

Akter also relayed her experience of working in Bangladeshi factories. She spoke about the verbal and physical abuse that workers endured. In 2006, she was suspended for 22 days after trying to organize a union; upon her return to the workshop, she was closely monitored and threatened by hired thugs on her way home every day. Upon phoning for help after the attack of a coworker, she was kicked, stripped of her clothing, and threatened with a knife, but she was able to make an escape.

She said that despite Bangladesh’s 32 unions, conditions have worsened. She expressed her amazement at seeing $55 shirts in America: “Where are the returns?” she asked. “We do not see them.”

Akter and Khanam also spoke about the Bangladeshi Accord on Fire and Building Safety, a legally binding independent agreement between over 150 retailers and several nongovernmental and labor organizations designed to ensure safe conditions in Bangladeshi workplaces. The accord provides its own engineers to inspect buildings, and if problems are found, it ensures that workers are not forced to enter the damaged buildings.

The University of Chicago purchases from brands such as Jansport, a member of the larger VF Corporation, which has not signed the accord, members of SOUL said at the talk. According to third-year Daniel Villalobos, a SOUL member and organizer of this event, SOUL is asking the University to cut ties with any company unwilling to sign the accord.

Villalobos said SOUL members have met with administration to try to accomplish this objective. He said they plan to raise awareness and pressure the University on this issue.

“We are the ones making the clothes, but you’re the ones purchasing them,” Akter said.