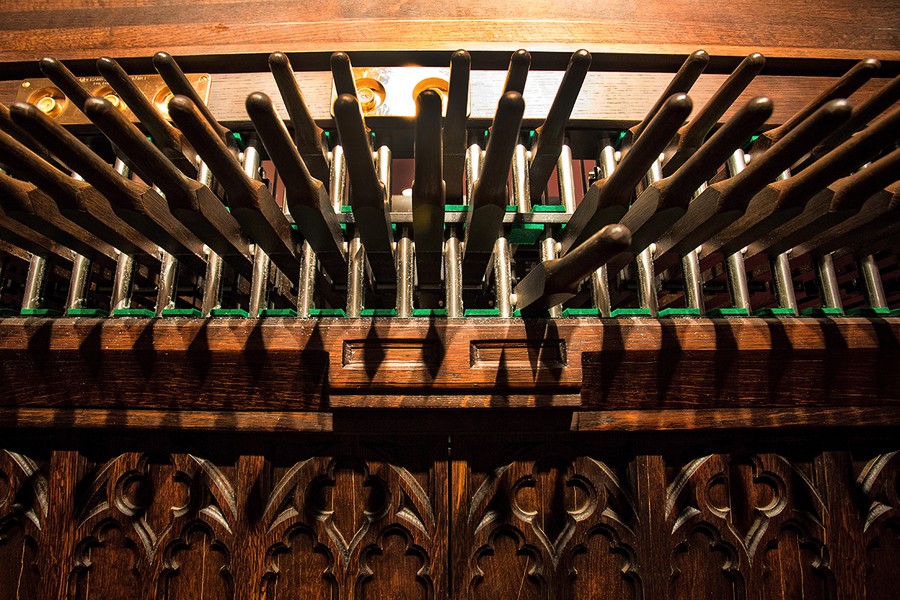 Twice each day, the campus echoes with grand, melancholy music. And though we can probably all point to Rockefeller Chapel as the source, most of us know very little about the mysterious bells and bell ringers that produce these haunting melodies. It turns out that there is much more to the story than these strange concerts might suggest.

The carillon in Rockefeller’s tower that provides such pleasing background music for our afternoons is actually the largest instrument in the world. As far as combined weight, it is second only to its sister carillon at Riverside Church in New York City. Both were created by the Gillett & Johnston bell foundry of Croydon, England in the early 1930s, with the intention of going beyond the grandeur of an average carillon’s already formidable size and into the extraordinary. A carillon is defined as an instrument containing at least 23 bells that is played from a mechanical keyboard. However, Rockefeller’s carillon has 72 bells, cast from 100 tons of bronze, and also boasts an extra large range, with its lowest note rung by a massive 18.5-ton bell at a low C sharp.

The UChicago Guild of Student Carillonneurs, one of the least known RSOs on campus, is currently comprised of 22 otherwise inconspicuous undergraduate and graduate students who learn to tackle this world-famous instrument by braving the 271 steps to the keyboard and letting the entire neighborhood hear every performance. Auditions are held each fall to find new students, and as might be expected at least a good knowledge of music (if not a lot of experience with piano) is required, though the keyboard for a carillon is unique. Carillonneurs play in the treble clef with loosely closed fists on a keyboard made of wooden dowels, while simultaneously using their feet to play the heavier bells required by the bass clef. Interested students are taught by advanced students, the University Carillonneurs, or other willing members of the local carillonneur community. Luckily for the new students, though, they don’t actually have to learn with all of Hyde Park as an audience. Instead they practice in the basement of Rockefeller on an old keyboard—removed after previous renovations that ended in 2008—hooked up to a computer that plays the sound of the bells in return. Then, once they have pieces prepared, they can go perform them in the tower in the hour set aside between 1 and 2 p.m. on Sunday afternoons.

“It’s always a bit special to be able to play on the actual instrument because all of our practice happens downstairs in the practice room on something that is, at best, a very feeble approximation of what we’re actually playing. There’s a very significant gulf between the practice instrument, which is relatively light, and the actual instrument where you have to contend with moving clappers that weigh tens of hundreds of pounds and striking bells that weigh tens of thousands of pounds… and so it’s always exciting,” said the RSO’s current president, fourth-year mathematics major Hunter Chase.

The carillon is played by a rotating schedule of carillonneurs every day at noon and 5 p.m. “Most of the people who play regularly on the carillon are not students. They come in from outside the University to some degree,” Chase said. In fact, carillonneurs visiting the city or the University will often ask to play. Chase, having been a dedicated student of the carillon from his very first year, also has a time every other Tuesday to perform. With limited resources for practice and especially performance time, the Student Guild is by necessity a small group. Chase explained the difficulty of this, saying, “We can only have so many people at a given time, and so if interest dies out—which can happen because we have so few people and because it’s a relatively unknown instrument—then there may be interim periods where there’s not enough support, not enough people to have an RSO, or not someone invested enough to head up the RSO.” The current incarnation of the group began in 2010 under the leadership of former president Oliver McDonald, who also taught Chase.

Second-year Kelsey Whitcomb, the Guild’s secretary, took lessons with Chase last year after seeing an ad in the Maroon. Whenever she began to discuss the more specific mechanics or facts about the carillon, she always paused and laughed, “Hunter can tell you about this.” And in reality, Chase is always ready to discuss the intricacies of the carillon, whether to explain how the distinct minor-third overtone of a carillon is produced by the bells or to discuss the challenges of arranging for a carillon. “When you strike a bell, you get a nice sharp sound at the beginning, and then it fades away. You don’t have the ability to stop the sound whenever you like…[so] a chord that sounds nice and full on a piano sounds muddled on the carillon.” Instead he has used violin and guitar sheet music as the basis for his successful arrangements, including “Requiem for Dream” and “Lexaeturna.” Each student carillonneur is only able to commit some time, though. “I didn’t go up in the tower last quarter as much as I’d like,” Whitcomb said, reflecting on winter quarter. But, she said, no matter how many times she’s climbed the steps, she always gets butterflies before she settles onto the bench.

Next year Chase will be doing graduate studies at UIC, but will continue to play any carillon he comes across and, of course, spend plenty of time at Rockefeller. “It is always a thrill to be able to play,” he said. “If you get the bug, like I did, then you just want to work to try and foster a carillon culture as much as you can. That’s what I’ve tried to do.” Maybe Sunday afternoon, instead of taking the free concert for granted, students and faculty alike will remember the hours of practice in the basement that happened before that beautiful music hit their ears.

The Student Guild of Carillonneurs will be having its annual recital on May 24 at 5 p.m. Tours of the carillon are also available twice daily with the weekday performances.