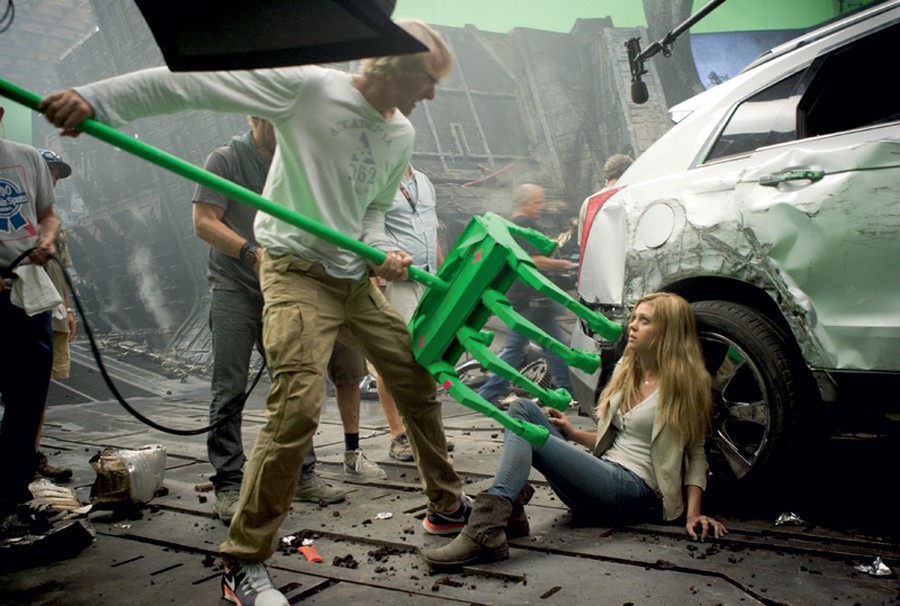 For my belated senior sign-off I had the chance to meet Jack Reynor and Nicola Peltz of the upcoming film Transformers: Age of Extinction in the Loop three weeks ago, staying true to my North Side roots. In an intimate room in the James Hotel, accompanied by fellow easily star-struck college students, I met the acting duo in person and heard the word “nightwalker” far more than I thought I would. In the film Peltz plays Tessa Yeager, Cade Yeager’s (Mark Wahlberg) daughter, and Reynor plays Tessa’s beefy Irish love interest, Shane Dyson. After having met them I can say with some confidence that I’ll see the movie when it comes out on June 27 to support my new-found Hollywood connections.

Q: For the upcoming film you shot a few scenes in Chicago? What parts of the city did you enjoy and what did you like to do while in the city?

NP: I love walking around in the city at night, my favorite is the museums and really taking in the streets, walking late at night is great. I’m a big nightwalker, you know.

JR: You can’t use that word…

NP: I meant I enjoy walking around at nighttime and enjoying the fresh air!

JR: Erm, I fancy visiting the Irish pubs while I was here, Uno’s a really cool place to go if you want to grab a quick bite to eat, right? I went to a couple steakhouses, can’t really remember the names. And yeah, great city!

JR: Well Detroit is a very interesting city and as far as I know 2/3 of the city’s buildings are unoccupied which means you’ve got an awful lot of room to do whatever you want and shoot there. And also outside the city in the suburbs close to Birmingham is a studio – a huge studio where you can shoot a lot of green screen indoor stuff and shoot VFX work in there. And so I think that would have been a really big draw for us.

Q: When were you first introduced to Transformers?

NP: I’ve been a huge Transformers fan as long as I can remember, I grew up with so many brothers and they all loved it so much. I thought the opportunity to shoot this was amazing, to bring these robots to life and be able to be a part of it.

JR: I’m still not over that nightwalker thing

JR: So, yeah, I mean, I was like three or four when I got a line of transformers toys and I was not aware that’s what they were initially; but yeah three or four was when I was first introduced. And then I watched the cartoons and I was a big fan of the three films while I was in school.

Q: What’s the biggest lesson you’ve learned from anyone you’ve worked with, Mark Wahlberg or Michael Bay or anybody?

NP: Before we started filming Mark told me to know the script so well – know your lines, know the scenes, know the robot’s lines, just know everything because when you get on set you’re not quite sure what you’re going to do. Sometimes you get on set and you’ll be so surprised because Michael will just pick a random scene from the end or our big scene between Jack and myself and you just never know what’s going to happen on a transformers set.

JR: Yeah definitely, preparation is key. I think also, Kelsey Grammar said to me in passing one day was that if you’re not prepared to collaborate then you’re not going to be able to find work. You’ll find the zenith of where you’re going to go very quickly if you’re not willing to share and relate you’re interest in work with a group of people. And I found that [to be] an interesting piece of advice that should be taken to heart.

Q: In terms of the scenes themselves, how did you manage to make the action scenes look interesting and still readable? Do you have a lot of experience working with Optimus Prime or characters like Optimus Prime, how was that like in terms of acting with something that isn’t there but you have to imagine it.

NP: I think that you just have to go for it, you can’t be hesitant or anything like that – Michael said to always commit and it always works better that way. I mean, there are moments when you are just talking to a metal pole and you feel really silly but you just have to forget about it, and believe it, and hope that other people will believe it.

JR: As an actor across the board your job and what’s expected of you is that you’ll suspend your disbelief, and that you’ll be able to create for yourself using your imagination, and, drawing on your imagination, you’ll be able to make a tangible world- something you can interact with. And that’s across the board with any performance whether it’s an independent film or any production.

Imagining giant robots is just an extension of that; it’s intimidating of course, maybe a little more so than other things, but if you spend a lot of time at it… Nikola and I had each other for support since it was the first time for both of us. Mark was very helpful too during that first stint. Once you get a little into it, your confidence grows and your realization takes hold.

Q: Obviously Transformers has a very large fan base, how do you feel about meeting such high expectations?

JR: That’s an interesting question. The expectations I mean if you mean that we were filling in somebody else’s shoes that is not what Nicola and I felt at all coming into this film. We watched the previous three films to explore and understand the world of transformers but it was very much an original thing and we wanted to create and develop original characters ourselves and hopefully that’ll be reflected in the film’s release. To be part of such a huge thing is hard to relate to because we haven’t seen the reactions from audiences and fans it’s hard to say objectively. At the end of the day you’ve just got to be gratified that you’ve got the ability to be working and be able to go back to whatever normal life is for you.

Q: Both of you have worked in so many genres: from comedy to drama to Shakespeare and [Nicola] is in Bates Motel.  How is it working on so many different projects and working on such an exciting film?

NP: The exciting thing is the chance to play different characters and be in different cities and learn different things in every role that you do. Nothing ever gets stale.

JR: For me the experience of shooting a $250 million movie is definitely far removed from shooting an independent Irish film. But at the same time you’ve got to approach it like anything else and not approach it according to scale or the content.

Q: Is it true that the first three movies are to be viewed as one complete trilogy and that the next set of transformers films are to have their own narrative arch and mode of storytelling made [as] to be distinct from the first three?

JR: Well, that’s the funny thing – Neither Nicola and I have heard anything of a sequel or a trilogy of anything like that. With the narrative of the film, being a Hollywood film, there is enough ambiguity to leave it open for sequels.

Q: How do you think audiences can relate to the characters?

NP: My character is definitely relatable given her dating hassles and overprotective Dad. Being in the film you see how her and Mark and all the characters lead everyday lives until the Transformers come in – and I wish I could relate to that last part!

JR: My character is an Irish racecar driver in Texas and doesn’t belong in that world but his confidence as a driver and his relationships help him assume his place there and it’s not easy. That’s something I can relate to because as a young Irish actor in the middle of Hollywood I’m not that far removed from a young Irish racecar driver in Texas. I know what it’s like to have to prove yourself to people.

Q: What would you do if you weren’t acting?

NP: I grew up playing ice hockey and I thought I would do it in college. I grew up with six brothers and a sister and from seven to 12 I did it with all of them.

JR: Someone asked an interesting question of the same variety – he asked if we could teach any college course what would it be? For me, if I weren’t acting I would love to teach sociology through film – that would be really incredible. Maybe I could still do that.

Q: At the end of the day what do you expect to gain from this experience?

JR: Like I said, Nicola and I have been incredibly lucky to have been part of this franchise so far and it’s afforded us quite a lot of opportunities with films that I’ve been proud of since Transformers, and I might not have been able to do them without being part of this franchise. Also, the experience of shooting of a Hollywood blockbuster was very valuable for me. Now that I’ve done this I won’t be quite as intimidated in the future by those projects.

NP: To have experienced this huge journey - of making this film and meeting Michael and Mark and so many talented people- it’s so amazing to say I’ve worked with them.