Porkchop settles down on 53rd Street, with disappointing results 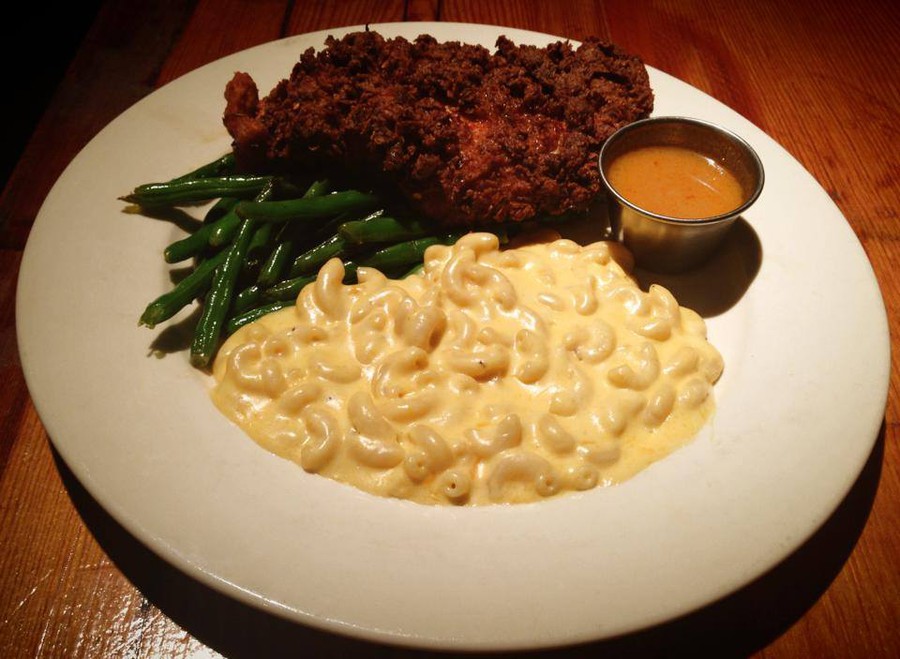 It’s easy to look at Hyde Park’s restaurants and say the options are better today than they were a few years ago. And if you haven’t seen this work in progress with your own eyes, perhaps you’ve heard it loudly boasted about by the university’s administration. The East 53rd Street redevelopment has taken the reinvention of the neighborhood food scene as one of its early successes.

Some of the evidence certainly validates the big talk. Z&H’s late-night BYOB taco/burrito days are a godsend. A10, while expensive, has a fair-valued brunch. Native Foods has come in to serve the vegans/vegetarians of academia. There are also Yusho, the upcoming Promontory, and a few other niche openings.

But with all its loud and well-publicized successes, the University has also gotten away with some disastrous duds.  To borrow from Anton Ego, the food critic in the film Ratatouille, one need only take the first few bites of Porkchop’s fatefully bland macaroni to hit some “fresh, clear, well-seasoned perspective.” Maybe then you’ll regret choosing Harper Court's Porkchop over takeout at McDonald's.

Porkchop’s neighborhood debut has been, to say the least, rocky. It might be unfair to judge a restaurant too harshly on its soft opening, but there is only so much that can be forgiven. On my first visit there, what I experienced was total chaos. Within the first 10 minutes of being inside the restaurant, I was told by three strangers to go someplace else. I wish I had listened. Receipt rolls were left unfurled along the floor, and I kicked some by accident as I tried to get to the bar. We waited 30 minutes for the only bartender to stop talking to a customer only to find out the restaurant had virtually nothing on tap.

When the food came, the disappointment grew. Pulled-pork sandwiches came out on soggy, flattened buns and with bland meat masked by sweet barbecue sauce. The mac and cheese would have been better described as Kraft’s with melted Cheese Whiz, and it certainly wasn’t worth the eight dollars my poor friend shelled out for it. But look who’s talking; my entrée fared only slightly better. The rib tips were passable, but with the small portions and high prices, Pork Chop just made me think wistfully of the now-defunct Ribs N Bibs.

My group left Porkchop that first time literally shaking with anger and shock. Could I even call it traumatizing? That night I woke up in a cold sweat. It was the knot of stress that had amassed between trying to flag down the waitress for the fifth time and accepting the fact that every fry on my plate was just as soggy and tasteless as the last.

Maybe we can dismiss the early flukes as just that, early flukes. But if the first-week meltdown wasn’t bad enough, Porkchop’s face-plant is magnified only by its seasoned experience. Following the University’s desire to avoid unnecessary risk, Porkchop is the second location of an already-successful restaurant placed on the ever-popular and competitive Randolph Street. What’s more, the original location fills during peak hours with crowds enjoying the patio space and the better-than-decent whiskeys and beers. But if the drinks and patio are what drive Porkchop’s northern brand, then it will truly need to up its game at its Hyde Park spot. Currently, outdoor seating is found more comfortably at Native Foods next door, and the drinks are too expensive for a college audience to enjoy fully.

In the visits I have made to Porkchop since that first fateful evening, I will gladly admit that the quality has improved substantially. Their service is now running at full steam, the drinks are for the most part available, and even the portion size has increased a bit. Yet even with these improvements, Porkchop continues to struggle with making the food the centerpiece of its space. The hybrid burger, which promises an enticing mix of beef and pork in the patty, is simply an oversalted and over-spiced behemoth of meat.

Or take the corn bread, one of their specialties, as another example. The yellow, spongy exterior cuts more like a cake and tastes like a Rice Krispy treat. Once again, Porkchop attempts to make up for the strange base of its dishes by covering with them with sauces. The cornbread’s honey butter almost makes up for the strange consistency, but they’ll need to be more generous if they’re going to deceive anyone. Or is it now wrong to be asking a restaurant to deceive me into thinking they’re better than that?

Rib N Bibs shared space on the same street as Porkchop for a little more than a month. In that time, one restaurant went through a calamity of an opening and then pulled itself up into mediocrity, and the other mysteriously closed down. The University of Chicago invested in the Porkchop name for good reasons: a healthy reception of their food truck on Ellis and a proven business model to back it up. But if Porkchop’s reception has proven anything, it is the overly cautionary tale of how the University’s investments come at a significant and not always worthwhile cost to smaller restaurateurs. What would have happened if Ribs N Bibs had been given a facelift? Or what could have happened if the higher-quality Brown Bag Lunch food truck had opened a barbecue restaurant in Hyde Park instead of in Irving Park? Who’s to say? For now, I’ll just have to settle for pressing my face against the glass of Ribs N Bibs' old windows, hoping for a miraculous return.