“I believe that the only way the city will move forward and truly become a world-class city and a great city is if we have great and neighborhood schools in every part of the city." 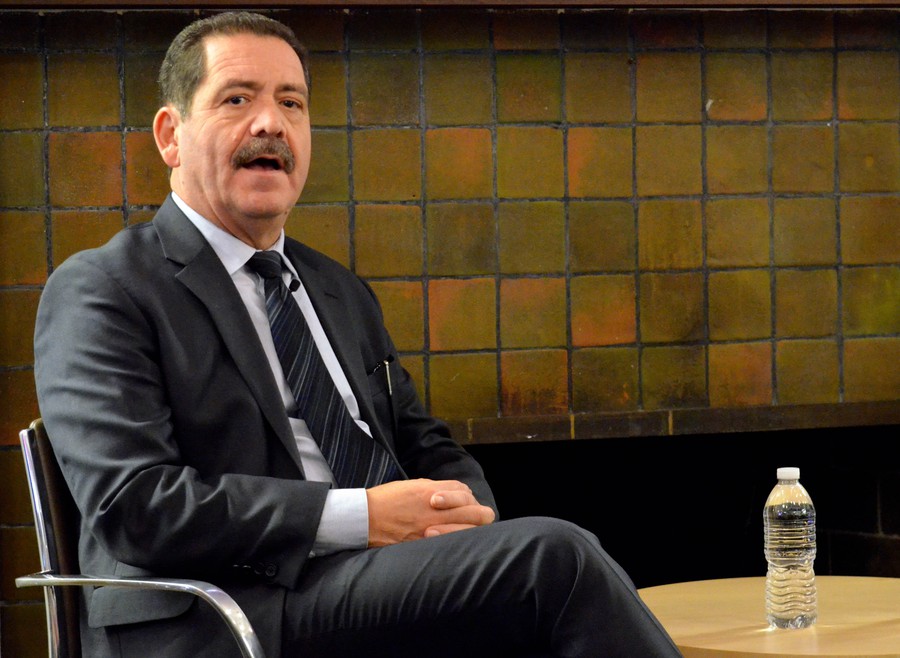 The Institute of Politics hosted its latest speaker in the Chicago Style series, Cook County Commissioner and Chicago mayoral candidate Jesús “Chuy” García, yesterday. As an underdog in the race against incumbent Rahm Emanuel, García discussed the importance of bringing diversity into the administration and ways to strengthen public safety.

García talked about his roots in the neighborhoods of Chicago and his beginnings in politics. “[I] challenged the entrenched Chicago machine and the bosses who have dominated [Chicago] politics for a long time,” he said. As committeeman under Mayor Harold Washington, the first African American mayor of Chicago, García said he was a part of the “most representative government in the history of the city, [which] empowered women, African Americans, and [embraced] some of the minority communities such as the gay and lesbian community for the first time.”

García also talked about his motivations for running for mayor, including his idea of establishing a “multiracial, multiethnic coalition for the 21st century” in the government of Chicago, and stated that he wanted to “take back Chicago for the benefit of ordinary people,” mentioning education and public safety as two important areas.

When asked about education reform, García talked primarily about his belief in the ineffectiveness of charter schools. While saying he is not explicitly “anti-charter” and that there are some successful charter schools in his district, he expressed concern that some charter schools are “mediocre,” yet take resources from neighborhood schools. “I believe that the only way the city will move forward and truly become a world-class city and a great city is if we have great and neighborhood schools in every part of the city,” García said.

Several audience members raised questions related to the budget and pension reform. García stated that, while not yet fully decided on tax hikes or cuts, he favors increasing real estate taxes. He believes that people in the city have already been “taxed sufficiently” in recent years.

García said public safety was another of his top priorities. He espoused the practice of restorative justice, which he described as “a tremendous tool that offers tremendous potential for resolving conflicts among young people in school settings [and] in neighborhood settings.” He added, “[It] essentially brings perpetrator and victim together as the community stands witness to what goes on: apology, restoration, and then support for both of them in order to ensure that they move forward together.”

He referred to employment as a means to achieve community safety, citing a UChicago study that found that levels of violent crime decreased when young people held jobs.

Additionally, García discussed his plans to hire 1,000 additional policemen and women, specifying that they would be trained to engage with and build relationships in communities with the goal of reducing violence and building trust between residents and the police force.

To differentiate himself from Emanuel, García emphasized his reputation and history of working for the benefit of people of all backgrounds, referencing his relationships with many different Chicago minority communities, and calling himself a “consensus builder.”