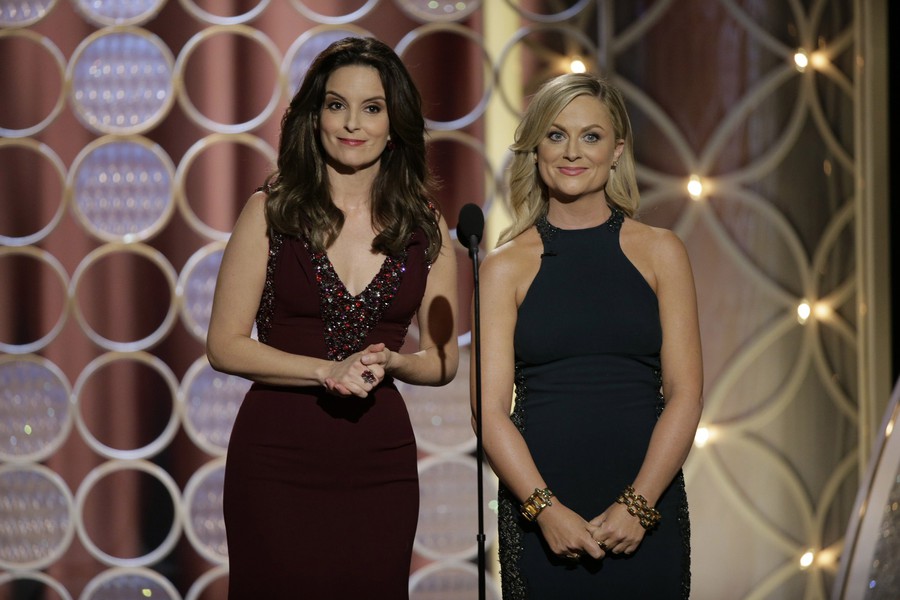 I would be remiss to describe the Golden Globe awards as some kind of anti-institutional, rebellious force. This is still, after all, a fancy dinner party for millionaires with the expressed purpose of hyping up their own work and stroking their own egos. But it would be accurate to say that the Globes have, traditionally, had a bit of a rebellious streak to them, at least when compared to the gilded heathenism that is the Academy Awards.

This probably has something to do with the fact that the Globes are run by the Hollywood Foreign Press: critics, in other words. The Globes exist at a strange intersection between the self-promotion of the film industry itself and the cynical appraisal of the critics’ circles. Of course, this is not very far from normal for critics, who are often more than happy to mock the credibility of awards shows with one hand and lend them importance by means of obsessive coverage with the other.

Hosts Tina Fey and Amy Poehler set the tone early, going after a number of targets ranging from George Clooney to North Korea. But of all the roasts, the duo’s deliberately in-poor-taste Bill Cosby bit ("I put the pills in the people that the people did not want put into them") was by far the most memorable, despite coming only minutes into the proceedings. Hollywood is traditionally quick to throw ribs but even quicker to circle the wagons around one of its own (see: Allen, Woody; Polanski, Roman) when things get serious. So a joke which implicitly assumes his guilt is actually quite radical, even if taking the subject so lightly might have been ill-advised.

Nothing quite as surprising as this occurred the rest of the evening, but again and again the Hollywood Foreign Press seemed eager to thumb its nose at its older brother Oscar. The split between comedy and drama, as well as the inclusion of television categories, strike at two soft spots for the film industry: the lack of respect in awards circles for comedy (as Michael Keaton hinted at in his acceptance speech for Best Actor in a Comedy for Birdman, which also won Best Screenplay) and, more bitingly, the current perception of TV's artistic dominance over film.

In that realm, the night's big winner was doubtlessly Amazon's Transparent, a show starring Jeffrey Tambor (Arrested Development) as a transgender woman who has begun her transition late in life. The show took home Best Comedy Series and Tambor snagged Best Actor in a Comedy. Socially conscious acceptance speeches such as those that followed can seem self-serving and tone-deaf; one has to question what good pop culture's so-called "transgender moment" is actually doing for real people facing those struggles. But it was hard to be too cynical of the self-congratulation when this was actually breaking some ground. This is as mainstream a transgender-focused piece has gone so far, and so perhaps there is some cause for celebration.

Less radical was the confirmation that Richard Linklater's Boyhood remains the frontrunner for Best Picture at the Oscars in a few weeks' time. The film shot over a 12-year period brought home Best Picture–Drama, Best Director for Linklater, and Best Supporting Actress for Patricia Arquette. Linklater and Arquette are also favorites for the same awards at the Oscars. Using the Globes as a predictor for the Oscars can be dicey, since the critics’ mindsets can be so fundamentally different from that of the Hollywood insider, but Boyhood has so much support from both ends of the spectrum it would be foolish to mark it as anything other than the prohibitive favorite.

Hollywood's booziest night is over. Oscar nominations are announced this week. By then, the nominees should be sobered up and ready to get back to the awards season grind. It's almost over, folks, but the big one is still coming. More coverage as we get closer.