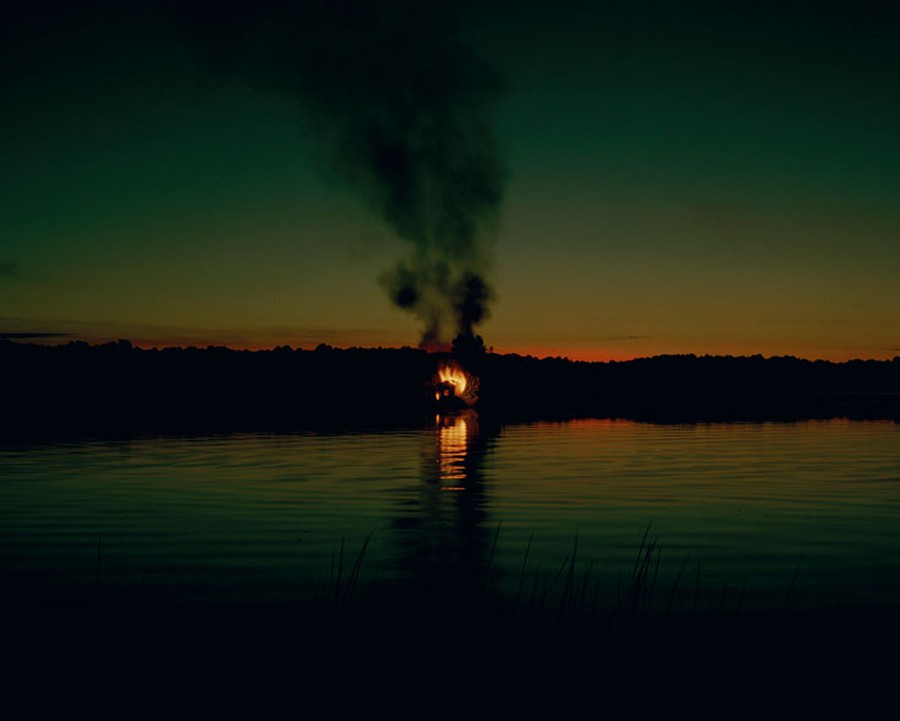 When the weather is plunging below zero, it can sometimes be difficult to appreciate the outdoors during the winter in Chicago. With heads bent down, braced against the cold, it can be hard to notice anything except the gray slush accumulating on the concrete sidewalks. The Logan Center Gallery brings some of the stunning beauty of nature inside to a more tolerable environment in the new exhibition Lands End.

The pieces in Lands End are loosely grouped together under the themes of: landscapes, how we define a landscape, where and what kinds of landscapes can be found, and how these landscapes impact people and art. The exhibition, which features work from 13 artists from around the world ranging from watercolor paintings to videography, references in its title the outdoor clothing store, Lands End, which originated in Chicago. The title also brings to mind the borders, both physical and political, that divide a space.

The division of landscapes is an idea reflected in the piece, “For the body without organs to sense” by Claire Pentecost, in which dozens of bird cages are hung from the ceiling of the gallery. The cages come in a wide variety of colors and styles, ranging from grand wooden cages to small wire cages with no ornamentation. Each cage works as its own landscape, and although each individual cage is separated from the others, they are all connected by the hanging strings that hold them up. One of the cages included a bright, yellow canary that sung shrilly and beautifully as people passed by the piece.

Another work that incorporated sound was Eric Watts’s video, “Map Ref. 51.1236° N 115.5556° W,” which featured an above view of a seemingly endless winter forest. As the video loops, a high pitched screeching—which was described by a tour guide as the “language of the trees”—is played over the visuals. The nature of the noise was left ambiguous, though. What are the trees saying? Are they screaming? The sound of the trees was present everywhere in the exhibit, yet despite the initial grating nature of the sound their noise quickly faded into the background and became unnoticeable. Whether this was the artist's intention or not is unclear, but it seemed like an appropriate commentary on humanity’s relationship with nature.

Perhaps the most impressive work in the exhibition, though, was Oliver Lutz’s two-part untitled piece. Sitting on opposite sides of one of the rooms in the gallery is a giant black canvas seemingly devoid of any detail or coloration. On the side sits a security camera pointed at the canvas and a television attached to the camera. Using infrared paint and a specialized camera, Lutz created an image of a young girl on a swing that is only visible on the screen. Ignoring the actual content of the piece, which was interesting in and of itself, the implementation and choice of medium was absolutely fascinating, and the piece produced the most discussion among the visitors present both for its technical aspects and the presentation of the image.

To complement the art on display, on the first day of the exhibition, performance artist Gillian Dykeman led tours of the exhibit and the surrounding area, acting as a mountaineering guide within the landscape of the gallery as opposed to the traditional docent. As she walked through the gallery she told stories about herself, touching on her affinity for yoga, her trips to the mountains with her boyfriend, and how each individual piece made her feel. As the tour moved outside and onto the Midway she tried to extend the themes of landscape to the surrounding buildings and park.

Overall, Lands End, despite the slight limitation of the small amount of space available, managed to bring a large diversity of thematic and thought provoking art together under one roof. Lands End will be running through March 15 and is in the Logan Center Gallery located on the first floor of the Logan Arts Center.