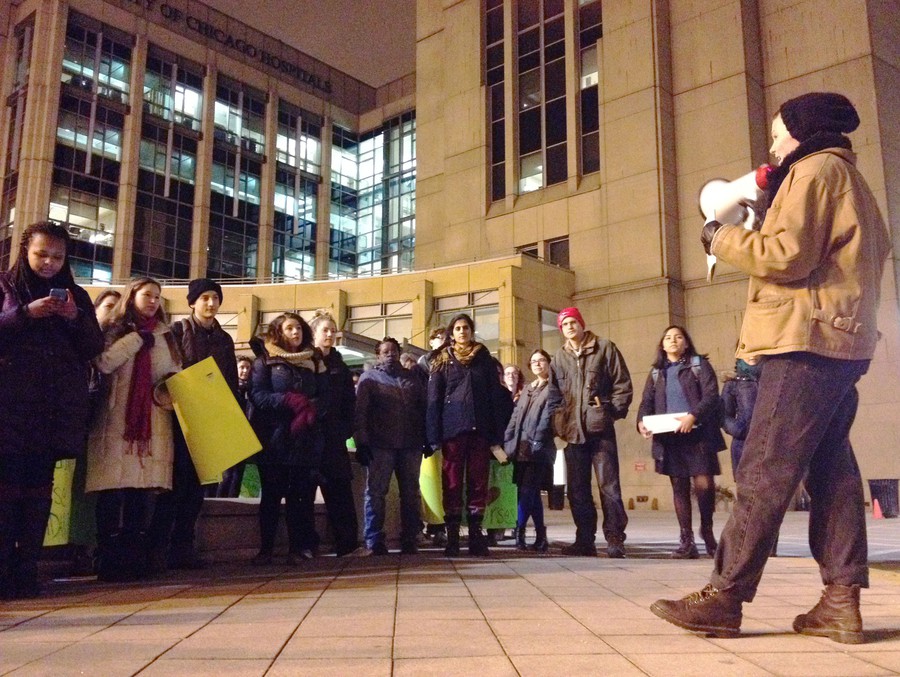 Nurses employed by the University of Chicago Medical Center (UCMC) overwhelmingly voted on Thursday to authorize a one-day strike after a full day of voting at a van-turned–polling station at the corner of East 57th Street and South Drexel Avenue.

According to Cindy Loudin, the Labor Representative for the National Nurses Union (NNU), approximately 95 percent of voters were in favor of the strike. A date for the strike has not yet been set; Loudin said that negotiations between the two parties are ongoing. The nurses’ vote to strike comes in the wake of ongoing contractual disputes between the UCMC and  the NNU.

“Bargaining continues tomorrow, and I hope that through this vote, management has heard our message loud and clear,” Loudin said.

In an e-mailed statement, UCMC spokesperson Lorna Wong characterized the strike vote as a “premature” move that runs counter to ongoing negotiations.

“We are extremely disappointed with the outcome of this vote, which authorizes the NNU to call a strike at any time and for any length of time—without going back to nurses for a vote. We feel this vote is premature as our nurses have not yet seen the full outcome of negotiations...UCMC does not want a strike. Unfortunately, the vote has put us in a position where we must prepare for a strike,” Wong wrote in the statement.

When the NNU sets a date for the strike, it will give the UCMC 10 days of advance notice so that it may hire non–NNU nurses to work in the hospital; if negotiations fail and the strike occurs, the hospital will continue to function.

The previous contract between the UCMC and the NNU expired last October, and the two parties have yet to reach a new agreement. Sticking points include the practice of nurse rotation and nurse-to-patient ratios.

Rotation is the practice of calling in day-shift nurses to work nights, or vice versa. Under the previous contract, nurses could be rotated twice in a six-week period. Brigitt Manson, a UCMC pediatric nurse and NNU member, said that eliminating rotation altogether is a major NNU goal in the ongoing negotiations, as well as a motivation for the strike vote.

“Our goal is no rotation, because rotating causes sleep deprivation and is fundamentally unsafe. I enjoy my work, I enjoy my job, and I want everything to be safe. By [us] voting to strike, [the UCMC] will understand that the nurses are working under stress, and that nurse satisfaction equals patient satisfaction,” Manson said.

Manson added that the NNU seeks to establish a limit on nurse-to-patient ratios in any new contract; the previous contract did not cover the subject. She also said that the turnout of the strike vote was indicative of the nurses’ unity in cause.

“Today, we had nurses who were off duty come in from Indiana, Palatine [Illinois], and even one nurse who was on maternity leave come in to vote. That is an expression of solidarity,” she said.

The strike vote was also met with student support. In the evening, a group of 40 student activists converged at the NNU polling van in order to express solidarity with the nurses. The students, who counted members of

Students for Health Equity (SHE) and Students Organizing United with Labor (SOUL) among their ranks, emphasized the unity of the nurses’ cause with ongoing activist movements on campus.

Third-year Kayli Horne, a member of SHE, said that the strike vote is an outcome of the larger problem of the University acting as a profit-maximizing business.

“We are here because we are outraged that the nurses have been bargaining for months, and their needs have remained unaddressed,” Horne said.  “It is clear that Robert Zimmer and Dean Polonsky care about nothing except profits, whether they come from buying up land in Washington Park, not building a trauma center, raising tuition, or not paying the nurses fairly.”

Wong wrote in the statement that the University does care for its nurses, and that this sentiment is part of its objective in the ongoing negotiations.

“We value the work our nurses do every day to care for patients and their families, and UCMC remains committed to a constructive dialogue and good faith negotiations to reach a contract that is in the best interest of our patients and nurses,” Wong wrote.

Negotiations between the UCMC and the  NNU are set to resume Friday.