The struggle is real, but worthwhile for communal bonding, at Kuvia

How far will people go for a t-shirt? 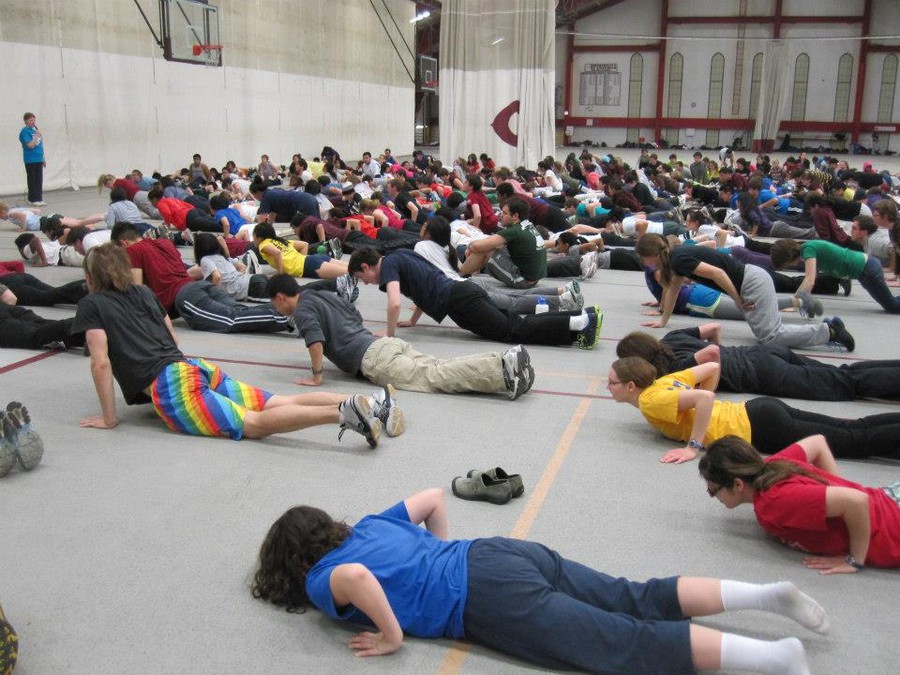 Courtesy of Council on University Programming

They said misery loves company. They didn’t say just how many in the company or how much misery, though. My RA said, “It won’t kill you—actually the opposite—you’ll have so much fun.” I felt exactly the opposite of R. Kelly: my mind was saying yes, but my body was telling me NO. So there I was, at 5:45 a.m., putting on pants before I knew what was going on. ’Tis the season for Kuvia, and all of its misery, company, and frigid attraction.

The winter festival attracts more than 400 students to Henry Crown, where warm-up sun salutations start off the celebration. This number slowly dwindles by 100 or so by the end of the week. They say if you make until Wednesday, you can’t stop because it’ll be a waste. What’s at the Friday finish line is house competition money, school pride, and a free t-shirt.

Emily Tixier, assistant chair of the Council on University Programming (COUP) board, can’t wait for the winter quarter tradition that she has participated in since her first year. “I think [Kuvia] is the favorite event of many people on the board,” Tixler said. “I think the earliness of it makes it very fun to work as we’re all kind of delirious from a lack of sleep and collectively dealing with it together as we put this event on each morning. The board definitely becomes a lot closer during Kuvia. We just have to make sure that everyone wakes up (which might involve some phone calls)!”

This will be Kuvia’s 31st year, after its 1983 inauguration by Don Levine, a former dean of the College. Kuvia’s namesake comes from Kuviasungnerk, which means the pursuit of happiness in Iniktitut. When my sleepy body is dragged out of the dorm and into the cold on Monday, happiness isn’t exactly what I call it. Many argue otherwise. Tixler advises people to treat the week like a challenge. “Getting up every morning and learning something new is a great bonding experience,” Tixler said. “Mutual complaining brings people together!”

So, after my first day of refreshing sun salutations led by certain faculty members, and an amusing and uncoordinated dance workshop led by Indian folk dance RSO Raas, I felt good, just not good enough to play Groundhog’s Day on Tuesday. While our RAs gathered the Alper troops to head to Crown, I slept soundly. I heard rumors that some RAs woke up their houses by banging on pots and pans in the morning…I was grateful mine were more forgiving.

My RA, Molly, is a die-hard fan. “I’ve done Kuvia for three years,” she said. “I lived in Broadview my first two years, so now that I’m in Max it would be sad and embarrassing if I quit now.”

I only felt mildly pathetic for quitting after my first day, but as a native South Floridian and perpetual night owl, Kuvia goes against everything my body stands (and rolls out of bed) for. The only thing that makes me feel guilty is that I’m missing some fantastic memories that a portion of the school gets to bond over. “My best memories of Kuvia are always attempting dance moves with friends that are far beyond the skill levels we could dream of achieving,” Molly said. “My worst memory was the one time I missed the Broadview shuttle.”

Kuvia typically remains the same from year to year, with a few alterations, such as the addition of a house banner competition and cancellation of fireside chats a few years ago. The next steps will be to replace the knitting competition with a community service element, and opening up the festival to more groups and RSOs that would like to join. Ice skating was an older tradition that she hopes will be reinstated. “And of course the polar bear run,” Molly said. “We always have to warn Harper administrators that there are going to be a bunch of naked people around that afternoon.”

For those planning on attempting more than one day like I did, Molly says you learn some tricks of the trade after a year ago, including her best kept secret: “Nobody knows how to use the #171 bus, and instead they take the shuttles; meanwhile I have been one of the first to grab my Kuvia shirt for three years now…”

I returned to Kuvia on its final day last year, and saw the joy, and frozen tears, of those receiving their well-earned free shirts, donning the phrase "Misery Loves Company." I felt disheartened by my lack of perseverance and considered trying again this year. Molly tells me that when her residents (like me) complain about waking up early, she reminds them that “a house that commiserates over morning calisthenics together, stays together” or gives us a reality check by reminding us that kids from satellite dorms and apartments can do it, so us Max P kids can’t even play the "it’s too early and cold" card…

It’s obvious that you don’t get it until you see it, or feel it: more than the cold—the enthusiasm and communal pride. At least that’s what they told me. Molly summed it up as something you do, for whatever reason, because of this immense pride and maybe even a few of the warmest memories you’ll have from our winter. “During [Kuvia], it’s easy to bite the bullet and go. Especially if you have people check you on it. After, you just spend a Friday night with carbs and Netflix and ponder why this all happened.” Evidently, the attending company loves misery, because of the camaraderie it produces, best described by one of Kuvia’s previous t-shirts: “Because UChicago isn’t intense enough.”