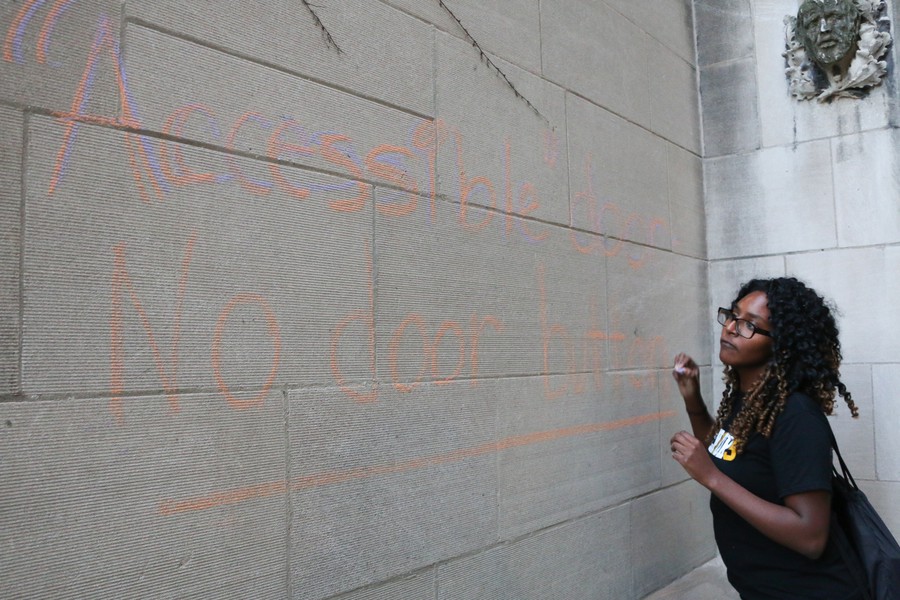 Mariam Desta works on chalking a wall with the message: “Accessible door—No door button” as part of a protest held a week ago.

Students for Disability Justice (SDJ) organized a chalking of the main quad last Friday in protest of the University’s accessibility policy for students with disabilities.

During the protest, members of SDJ, an organization committed to influencing University disability policy, stated that it has three goals: ending forced leaves of absence in regards to mental health, increasing the budget for counseling and disability services on campus, and focusing on acceptance and equality for disabled members of the UChicago community.

SDJ concentrated its chalking on areas like the Classics building and Haskell Hall, where the group says accessibility for students is limited, lacking a handicap button at certain entrances. SDJ also pointed out that several bathrooms across campus, including the women’s room on the first floor of the Regenstein Library, are inaccessible because they do not have automatic doors.

The director of public affairs for the University, Marielle Sainvilus, responded that the DOJ never actually filed a lawsuit against the University.

Sainvilus explained that following the 2006 settlement, the University has “made numerous changes to improve the accessibility of its facilities, transportation, accessible routes, signage, and assistive listening systems on campus, among other things.“

Recent renovations include: renovating the sloped walkway at Cobb gate, installing new elevators at the Reynolds Club and Study of Gender and Sexuality/Center for the Study of Race, Politics, and Culture, and significant accessible features constructed at the Saieh Hall for Economics.

“The University has not reduced spending in relation to the accommodations provided to students. On the contrary, the budget for Student Disabilities Services has increased significantly in recent years,” Sainvilus wrote in an e-mail.

SDJ was formed last spring by Nora Heflin as an affiliate of Southside Solidarity Network (SSN). SDJ has not limited itself to the traditional sense of “disability” in order to allow more students to associate themselves with the movement.

“We’re tying in a lot of things with the word disability: depression and anxiety, which are most prevalent on college campuses, physical disabilities, such as the use of wheelchairs and assistive technology, ” Helfand said.

Third-year Hannah Landes, a leader in the SDJ chalking, said, “The way that the University has been prioritizing its prestige and its financial standing over the lives of its students is, I think, really unacceptable. Ultimately we would want to make this an institution that is accessible to its disabled students, to disabled faculty, to students who may not fit into the four-year plan or the academic plan that prioritizes efficiency and prioritizes academic success over one’s individual health and well being.”