Talk at Hillel adresses ethics, war, and the Jewish state

“In the back of my mind when I think about ethical issues in terms of war has got to be what’s happening in my own neighborhood.” 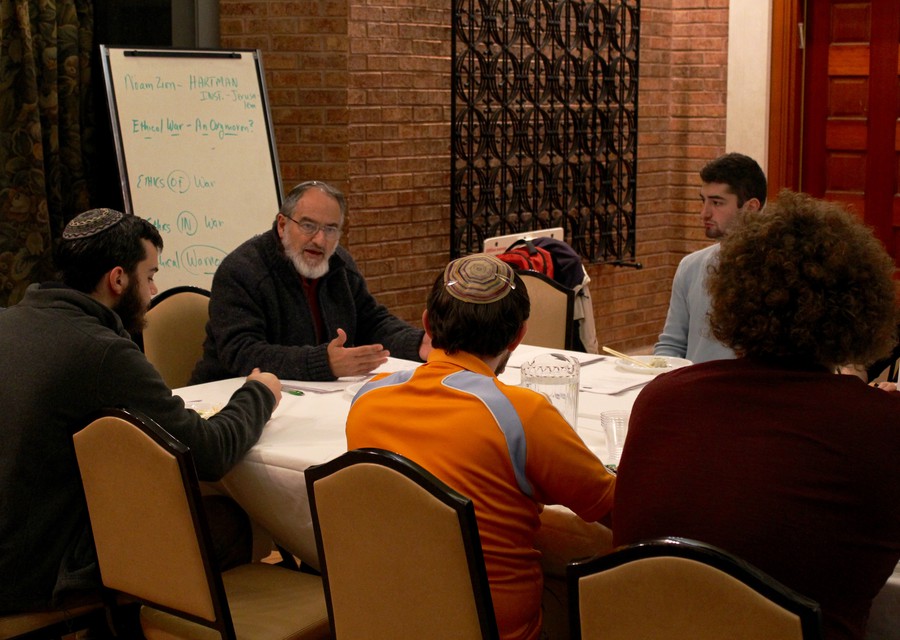 Noam Zion, a scholar at the Jerusalem-based Shalom Hartman Institute, spoke on ethics and war at Hillel Wednesday.

A talk at Newberger Hillel last Wednesday addressed the intersection between ethics and war, especially in the context of the ongoing Israeli-Palestinian conflict.

The event was arranged due to recent violence in Israel, the West Bank, and specifically the city of Jerusalem, and recent activism on campus, including this week’s Apartheid Week events, made its topic particularly relevant. Noam Zion, a scholar at the Jerusalem-based Shalom Hartman Institute, said that recent events were on his mind as he gave the talk.

“In the back of my mind—when I think about ethical issues in terms of war—has got to be what’s happening in my own neighborhood,” Zion said

Zion was invited to the event by Newberger Hillel Executive Director Andrea Hoffman, after she spent time studying at the Institute last summer. The Institute, as Zion described it, tries to accommodate historical Jewish thought to the relatively brief modern history of Israel as a Jewish state.

“When you’re under the gun—literally under the gun, in the ethics of war—you don’t have much time to think...The test of ethics as the Hartman Institute sees it is always the test of what is the relationship between ethics as an aspirational world…and the attempt to live in the real world,” Zion said.

Zion pointed out a traditional distinction made between the ethical justification for the decision to engage in war—ethics of war—and the way the war is conducted—ethics in war. Ethics in war, Zion said, has been complicated by an intellectual shift that has prioritized a humanitarian approach to the question. Previously, Zion said, the question had been conceived of as a sort of contract between the two sides in a conflict, in which one side’s compliance depended on the others.

“When ethics is identified with human life, with sensitivity to a universal justice, and not only as a loyalty or a patriotism to your group or to your city, then it becomes very problematic to talk about ethics in war,” Zion said.

Zion described a debate around the time of the foundation of the modern state of Israel between Jewish figures who saw a Jewish state as necessary or desirable, and their opponents, including some religious Zionists and pacifists, who considered the war that might be needed to achieve it morally unacceptable.

Zion said that he identified more closely with the position of Israeli novelist Amos Oz. Zion had participants from the talk read at length from an essay in which Oz argues that the “tools of statehood”—including war—must be adopted as a matter of necessity for the Jewish people, though it should not be gloried or seen as a good in-and-of itself.

“His ethical problem is: ‘Can we live in a world which is imperfect without either, on one hand, having such a visionary notion of peace that we will not get involved in sovereignty at all or simply be wiped out, or on the other hand, can we defend ourselves without making a virtue out of what’s an awful necessity?”